Everything Everywhere All at Once: All the Wild Movie References, Explained (As Best as We Can) 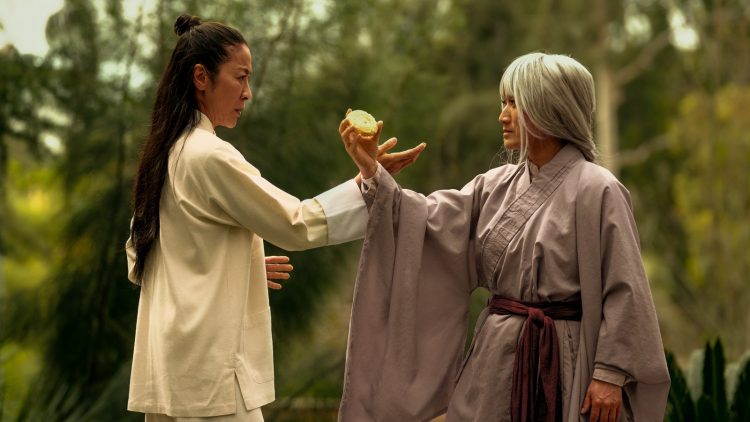 This post contains spoilers for Everything Everywhere All at Once.

Everything Everywhere All At Once is a giant nerd. It’s also a whirlpool, a funhouse, an unpredictable Russian doll of ideas and feelings and things, dense with trippy plot points about parallel universes and metaphors about familial love and acceptance. But it’s also a movie about movies, layered with references that not only pay homage to classic films of the past, but also reanimate them with unhinged verve. The film answers such questions like: What if the rat in Ratatouille was actually a raccoon? What if The Matrix was actually about an evil bagel? And, perhaps most romantically, what if Michelle Yeoh starred in a Wong Kar Wai movie?

Now that the movie, heroically directed by duo Daniels (comprised of Daniel Kwan and Daniel Scheinert) has hit theaters nationwide, let’s dive into all the wild cinematic references that pepper the film, from that Ratatouille remix to the reimagined kung fu archetypes.

According to the Daniels, Everything Everywhere All at Once might not exist without The Matrix. “This movie is 100 percent a response to The Matrix, obviously,” Daniel Kwan said at SXSW, where the film premiered. “We wanted to make our version of it.” Kwan also said as much in the film’s press notes, recalling an afternoon when he watched a double feature of The Matrix and Fight Club, and how both 1999 films, particularly the action sequences in The Matrix, reinvigorated his love of movies. “I was like, man, if I could just make something half as fun as The Matrix is, but with our own stamp and our spirits, I would just die happy,” he said.

The parallels are instantly obvious. In The Matrix, the cyberpunk sci-fi blockbuster directed by the Wachowskis, a computer hacker named Neo finds out he’s living in a simulated reality and undergoes training to understand the dark truth about the world he inhabits. In Everything Everywhere, Michelle Yeoh takes on the Neo-like role, playing a woman who finds out she’s the unsuspecting, one-in-a-million hero in a multiverse where dark forces reign. Like Neo, she’s the only one who can save the day. The overt parallels end there, for the most part, though both The Matrix and Everything Everywhere lean on kung fu and martial arts for their epic action sequences.

Clan of the White Lotus (and other kung-fu classics)

Speaking of kung fu, Everything Everywhere is rife with nods to the practice, as well as classic kung fu films. The biggest nod arrives in the form of Evelyn’s kung fu master, played by Li Jing. With her fluffy white eyebrows, mustache, and beard, she’s a direct play on the classic Bak Mei, or Pai Mai character, a kung fu master whose likeness has been portrayed in numerous 1970s and 1980s-era Hong Kong films like Clan of the White Lotus and Executioners of Shaolin. The character was also portrayed in flashback scenes in Quentin Tarantino’s homage-o-rama Kill Bill, with Pai Mai taking on Beatrix Kiddo as an apprentice and teaching her everything she knows about martial arts. Everything Everywhere pokes good-natured fun at the archetype, making its Pai Mai an extremist about how everything can be kung fu, right down to a pinky finger. The Daniels take it even further, choreographing an entire fight sequence in which Evelyn beats up her enemies with her newly swole pinky finger.

Stanley Kubrick’s oft-imitated 1968 sci-fi epic got another poke in Everything Everywhere, with the film riffing on the classic opening sequence in which the hominins discover the monolith. But the scene also delivers the viewers into a rather peaceful moment in the otherwise chaotic film: in one of her parallel lives, Evelyn is a prehistoric rock, silently observing and enjoying the natural world…for a few moments, anyway.

Nowhere is Everything Everywhere more chaotically unbridled than in the “Racacoonie” scenes. In one of Evelyn’s other lives, she’s a chef at a hibachi restaurant, who’s consistently outdone by her coworker Chad (Harry Shum Jr.). Soon she finds out that Chad’s getting serious help from…a culinarily gifted raccoon who hides under his chef’s hat, playing him like a marionette and guiding his hands as he cooks. It’s a deliriously funny riff on the plot of Ratatouille, showing just how silly the plot of the Pixar film is and how absurd it gets once the rodent is replaced by a bigger creature. But the Daniels don’t just float the concept by as a comic idea. They follow through, returning again and again to the subplot as Chad loses Racacoonie to villainous pest control and, with the help of Evelyn, rescues his furry friend. Rescuing Racacoonie becomes part of the narrative, showing Evelyn’s strength and dogged pursuit of being the hero.

In the Mood for Love 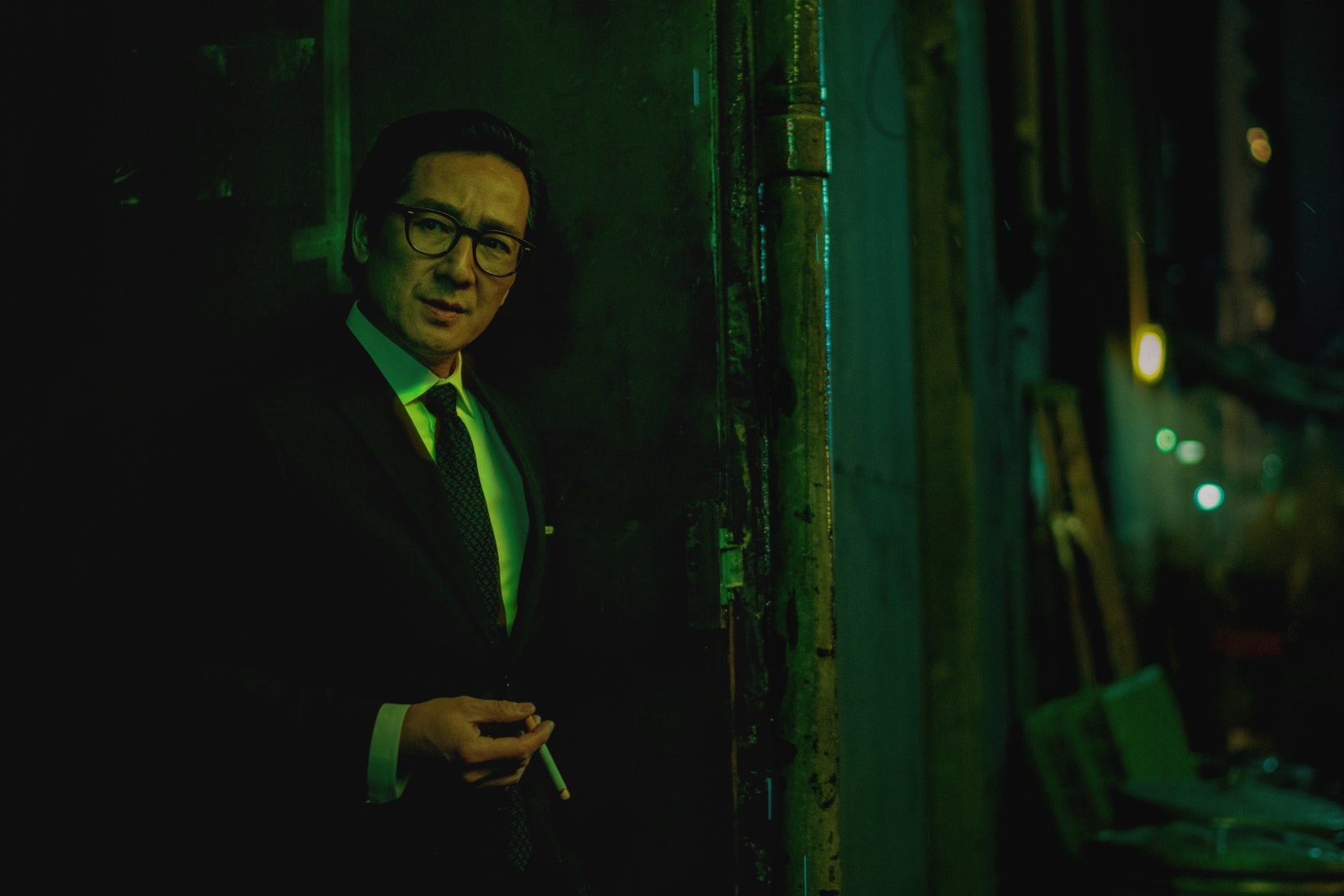 In terms of style and narrative, the Daniels could not be further from someone like Wong Kar Wai. And yet, during a handful of scenes in Everything Everywhere, the duo pay painstaking homage to the director’s oeuvre, particularly his 2000 classic In the Mood for Love. As Everything Everywhere progresses, Evelyn learns that one of her parallel lives is that of a movie star of Yeoh’s caliber, with the film using real footage of Yeoh at red carpet events. However, in that parallel life, Evelyn learns that her success is only possible because she chooses not to be with Waymond, forging a different path ahead. Waymond somehow finds his way to the premiere of her latest movie, and the two go outside for a one-on-one conversation. It’s moody and dark, stylized with the same romantic energy as the corridor scenes in In the Mood for Love, in which Tony Leung and Maggie Cheung play two neighbors who can never be together, and must resort to exchanging longing looks that no one else can catch. These scenes provide some of the quietest moments in Everything Everywhere; there are no wild punchlines, no hot dog fingers, no secret raccoons. Just lovely cinema in the key of a classic Wong film. After all, what could create more cinematic yearning than being all the way over in a parallel universe and still running into the one who got away?