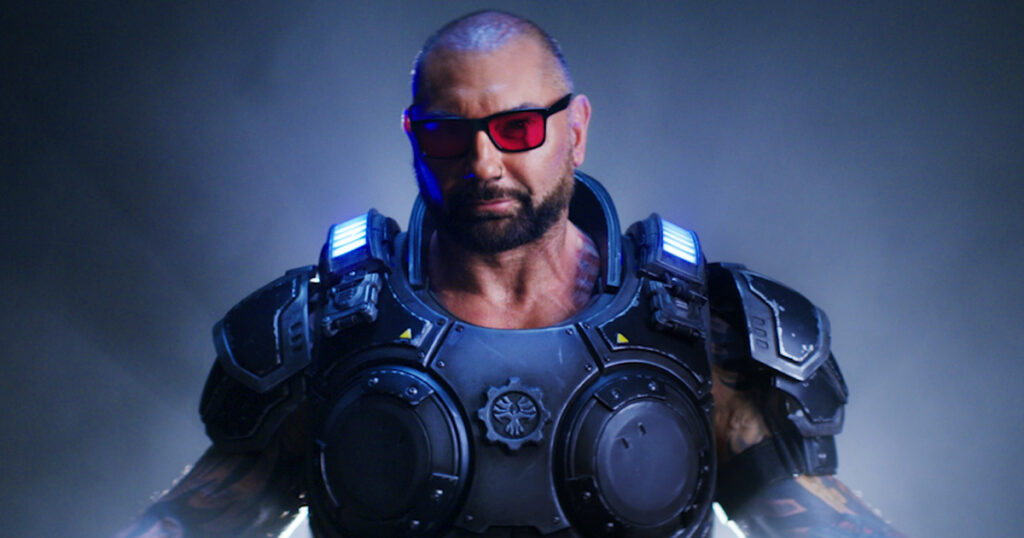 It’s no secret that Dave Bautista has wanted to play Marcus Fenix in a Gears of War movie for some time… and now that they’re actually making one, the actor’s moment has finally arrived.

It was announced earlier this week that Netflix has acquired the rights to the Gears of War video game franchise and would be partnering with The Coalition, the developer behind the series, to develop a live-action movie as well as an animated series. Dave Bautista took to Twitter today to make sure those involved in the Gears of War movie still know he’s game to take part.

Plenty of fans have supported the idea, with even the creator of the Gears of War franchise, Cliff Bleszinski, saying that Dave Bautista should be the one to play Marcus Fenix. The clip Bautista shared comes from a campaign for the release of Gears of War 5, which found the actor appearing as a playable character.

Gears of War: Netflix is developing a feature film and animated series adaptations of the video game franchise

Dave Bautista is such a fan of Gears of War that he once started to pitch the concept to studio executives when he was brought in to talk about a role in a Fast & Furious sequel. “I don’t make any pretense about it. I had a chance to get a meeting at WB, they were talking to me about this and that and I said ‘hey, let’s talk about Bane,’” Bautista said. “That happened to me one other time in my career. They wanted to talk to me about Fast and the Furious, and I said ‘I’m not interested, let’s talk about [Gears of War character] Marcus Fenix…“

The original Gears of War trilogy focuses on a war between humanity and the subterranean reptilian hominids known as the Locust Horde on the world of Sera. Marcus Fenix, a soldier in the Coalition of Ordered Governments, is tasked to lead a last-ditch effort to destroy the Locust Horde and save humanity.

Fan castings aren’t always the best idea, but is Dave Bautista the perfect fit for Gears of War?