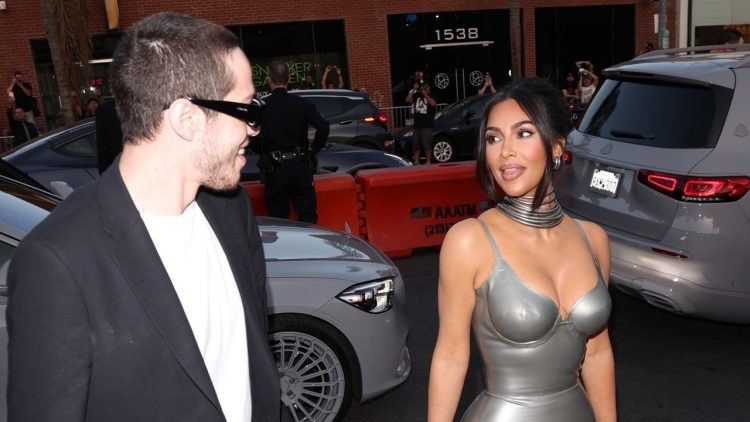 Some things are impossible to predict. Two years ago, say, who would have been able to guess that come 2022, we’d be 28 months into a global pandemic, baggy suits would be back in style, and a post-divorce Kim Kardashian would be dating Pete Davidson? And yet, here we are—with at least two of those things, and arguably all three, colliding last night. Who would’ve thought!

Davidson and Kardashian, who have been (relatively) quietly dating each other since Kim hosted Saturday Night Live in October, more or less made their first official public appearance together at last night’s premiere for the Kardashians’ new Hulu series—in that they arrived in the same vehicle and Pete escorted Kim up to the carpet before he promptly eschewed the photocall altogether. It all felt uncannily natural: Kim, in a silver latex Mugler gown, looked classic Kim, while Pete, in a slouchy suit from the punky luxury label Midnight Studios and a white tee, looked classic Pete.

“​He’s here to support me, it’s my thing,” Kardshian told E! News (the home network of her family’s previous reality show), giving a careful explanation as to why he skipped the red carpet. “I don’t think it’s his thing to be all up here with me.”

Despite posing for zero official photos, Davidson still dressed the part, falling in line with the sleek, monochromatic palette the Kardashians have pivoted towards in the last few years. But the two prongs of Pete’s style are still “kooky” and “aggressively casual,” so he and his stylist Britt Theodora still got some telltale details in: the wonky zip-up slit on the pant legs, Pete’s favorite Prada shades, some easy-going Vans (which Kim, after years of championing the any-occasion stiletto, has also been wearing a lot lately). And the suit itself is a prime example of the good kind of bad suit, the kind we’ve been seeing on the likes of Seth Rogan, Justin Bieber, A$AP Rocky, and Elliot Page. Sure, there’s something off about it—but that’s the whole point. Arguably, never has the appeal of “so bad, it’s good” held more weight than it does right now.

Then again, it does feel like there’s some room for Pete and Kim to lean into the camp of the whole situation, to really play up the absurdity here. Earlier this week, Kardashian told Jimmy Kimmel that, for Valentine’s Day, Davidson gifted her with the Aladdin and Princess Jasmine costumes they wore during their first kiss (albeit, they were in character doing a skit on SNL). Would love to see those relics return on the red carpet.