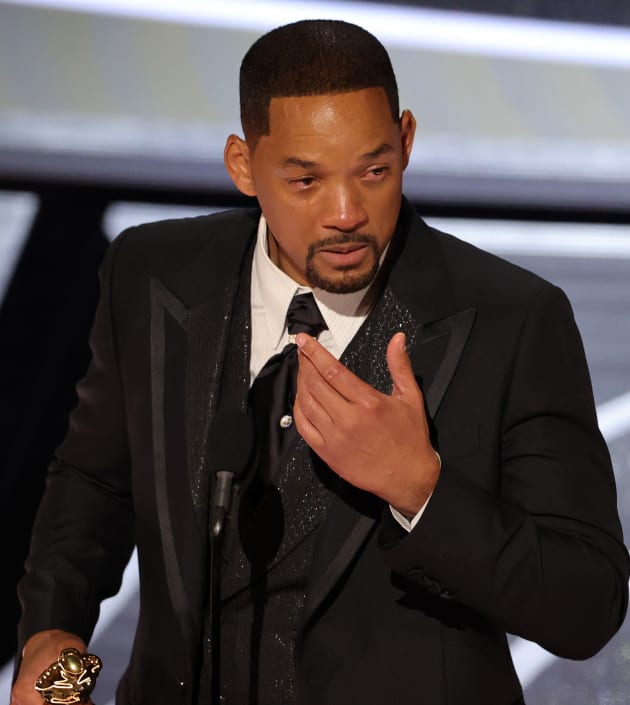 
Forgive the obvious pun, but:


Will Smith has been slapped with a harsh punishment in the wake of his stunning act on stage at the 2022 Academy Awards.


For those who somehow missed it, the superstar approached Chris Rock two weeks ago after the comedian made a joke about Smith’s wife, Jada, and smacked him in the face.


Smith, who later won his first-ever Best Actor trophy, then screamed for Rock to keep Jada’s named out of his “f–kin mouth.”


In response, The Academy of Motion Pictures Arts & Sciences said on Friday that Smith has been banned from attending the Oscars for the next decade.


“The Board has decided, for a period of 10 years from April 8, 2022, Mr. Smith shall not be permitted to attend any Academy events or programs, in person or virtually, including but not limited to the Academy Awards,” read the statement from Academy President David Rubin and CEO Dawn Hudson.


Some critics out there think Smith should be forced to give back his award as well, which he won for portraying the father of Venus and Serena Williams in King Richard.


Reacting to the ban, meanwhile, Smith said in a simple statement:


“I accept and respect the Academy’s decision.”


News of the ban came one week after the 53-year-old resigned from the Academy, thereby forfeiting his ability to vote in future Oscars.


It also came in the wake of Smith issuing a lengthy apology.


“My actions at the 94th Academy Awards presentation were shocking, painful, and inexcusable,” Smith said on April 1.


“The list of those I have hurt is long and includes Chris, his family, many of my dear friends and loved ones, all those in attendance, and global audiences at home.


“I betrayed the trust of the Academy.”


“I deprived other nominees and winners of their opportunity to celebrate and be celebrated for their extraordinary work.


“I want to put the focus back on those who deserve attention for their achievements and allow the Academy to get back to the incredible work it does to support creativity and artistry in film.”


Concluding, Smith announced his departure from the Academy as follows:


“So, I am resigning from membership in the Academy of Motion Picture Arts and Sciences, and will accept any further consequences the Board deems appropriate.


“Change takes time and I am committed to doing the work to ensure that I never again allow violence to overtake reason.”


A day after the ceremony, and the Rock slap, Smith said:


Violence in all of its forms is poisonous and destructive.


“Jokes at my expense are a part of the job, but a joke about Jada’s medical condition was too much for me to bear and I reacted emotionally.


“I would like to publicly apologize to you, Chris. I was out of line and I was wrong. I am embarrassed and my actions were not indicative of the man I want to be.


“There is no place for violence in a world of love and kindness.”