Why U.K. Nurses Voted to Strike for the First Time Ever 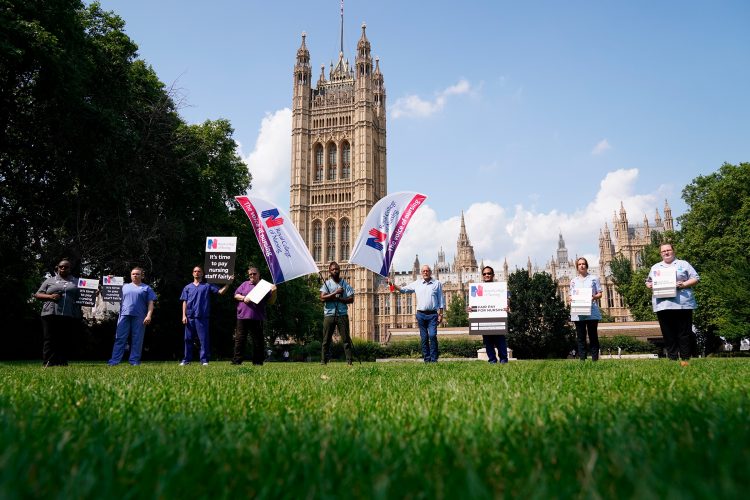 It was late last Thursday when Naomi Fullen Somers, a young nurse at Derbyshire Community Health Services, finished tending to her last patient. The 23-year-old was used to working overtime most days of the week, but that day, her shift had been particularly long and stressful.

As she walked to her car, she glanced at a notification that had popped up on her phone. It was an announcement from The Royal College of Nursing, which read, “Nursing staff vote to strike in the majority of NHS employers across the UK.”

For the first time in 106 years, the Royal College of Nursing, or RCN, has decided to strike after a ballot vote on industrial action with more than 300,000 union members took place last week, demanding better pay and citing concerns for patient safety. The RCN anticipates nurses at most of the state-run National Health Services, as well as many of the country’s biggest hospitals, to take part in the strikes, which are expected to begin before the end of this year.

“Anger has become action–our members are saying enough is enough,” RCN General Secretary Pat Cullen said in a statement. “Our members will no longer tolerate a financial knife-edge at home and a raw deal at work.”

Nurses with placards outside the Royal College of Nursing in Victoria Tower Gardens, London, following the government’s announcement of the NHS pay offer, on July 21, 2021.

As the cost of living soars in the U.K. due to inflation running at 10% and energy bills surging, the RCN’s decision to strike has fueled fears that an unprecedented wave of industrial action from the public sector–including healthcare and public transport–will sweep the nation this winter.

Along with acute work pressures, the RCN also cites the low retention of nursing staff that has contributed to staff shortages across the U.K.

25,000 nursing staff around the country left the Nursing and Midwifery Council (NMC) register in the last year, along with 47,000 unfilled nurse posts in the NHS. It argues that the shortage is largely driven by poor pay: following the NHS Agenda for Change pay announcements earlier this year, in real-terms nurses were 20% worse off in England, Wales and Northern Ireland, and 16% worse in Scotland, compared to ten years earlier, according to researchers at London Economics.

“What’s happened is that year after year, nurses and public sector workers have experienced a gradual erosion, thanks to pay freezes or pay increases of less than 1%,” explained Gavan Gavan Conlon, a co-author of the study commissioned by the RCN. “Quite honestly, it’s a pretty shocking state of affairs over such a long period of time.”

In response, the Fair Pay for Nursing campaign is calling for a pay rise of 5% above inflation, which is expected to cost nine billion British pounds, or nearly 10 billion dollars–a demand that the government says is “simply not deliverable.”

The nurses’ strike is expected to significantly disrupt a healthcare system already strained by the COVID-19 pandemic, a severe shortage of staff, and significant underinvestment from the government. The system is currently seeing a record seven million patients on waiting lists for hospital treatment.

“We are all hugely grateful for the hard work and dedication of NHS staff, including nurses, and deeply regret that some union members have voted for industrial action,” said Steve Barclay, the Health Minister, in a public statement.

For Somers, the decision to go on strike was not an easy one. “I know it isn’t in a nurse’s nature to go on strike … But I think our voices need to be heard,” she said. “I don’t think the general public and the government quite understand that it’s not just about pay. It’s about more than that.”

The young graduate only became a fully-qualified nurse two months ago, inspired to take up the profession after seeing how her grandma received good care in hospice. But soon after she started the job, the strain on nursing became apparent and overwhelming, she said. “It was so busy during my first shift inside a trauma ward that I remember thinking, ‘what did I get myself into?’”

“If I had more resources, I could provide patients with higher-quality care,” Somers continued. 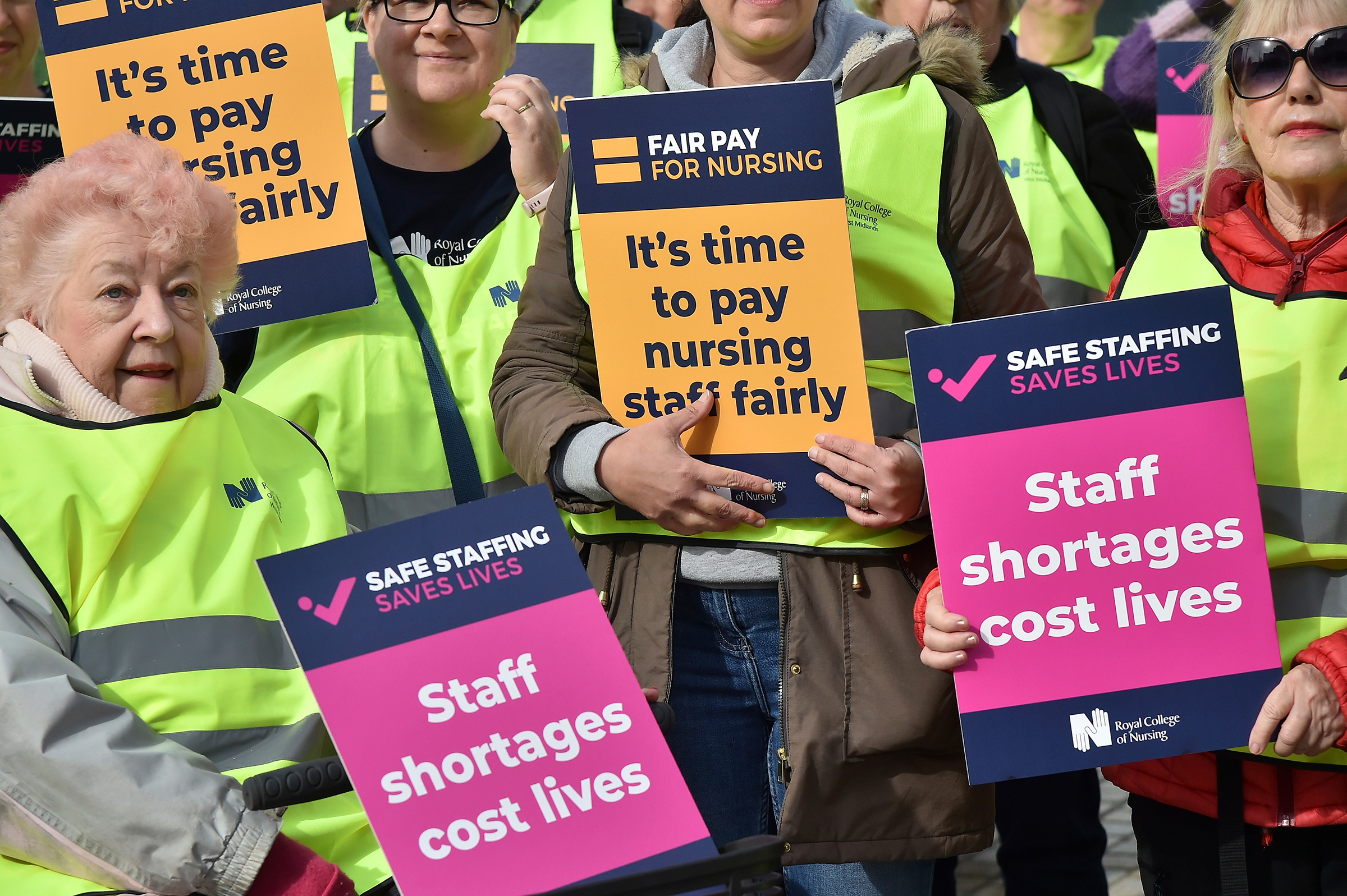 Protesters from the Royal College of Nursing demonstrate outside the Conservative Party conference at the ICC in Birmingham, England, on Oct. 3.

The decision to go on strike didn’t come lightly for Siobhan Aston in Scotland, either. The 43-year-old who has worked as a rehabilitation nurse for nearly a decade was pushed over the line after working on an understaffed COVID-19 ward all of last year.

“It was a juggling act for management on a daily basis to figure out how to tend to covid patients,” she recalled. “On top of that, you had a lot of staff coming into contact with covid, so it was a very stressful time.”

“I think a lot of what we do is very undervalued,” she added, saying that all other avenues to make the government listen to nurses’ concerns have been exhausted.

Read More: What the Success of Women-Led Protests Tell Us About Iran’s Future

Last Wednesday Oliver Dowden, cabinet office minister and spokesperson for U.K. Prime Minister Rishi Sunak, told reporters that the government would strike a balance between the “crucial role” played by nurses and the fiscal challenges facing the country, adding that contingency plans are in place for any “staff impact” caused by the industrial action, such as the NHS prioritizing the most essential services. Still, he acknowledged that it would have an impact on other activities, including elective surgery.

But Conlon at London Economics argued that the costs of filling in vacancies using temporary staffing agencies was more expensive over the long term than paying nurses better wages. “It’s quite a shocking additional cost to the Exchequer,” he said, “that isn’t worth losing nurses and their institutional experience.”

Despite supporting the strike, Somers, the young nurse in Derbyshire, also feels anxiety at the thought of lost income. “I don’t think it will discourage me from striking, but I know that it will have a huge impact on the day-to-day for a lot of nurses,” she said.

However, not closing the pay gap might have even worse consequences: “Considering so many people have already dropped out of nursing in the last few years, I’d like to stay in the profession because it’s my passion,” she contended.

“But if the cost of living continues to rise and nursing pay doesn’t increase in line with that, I may have to consider other options.”