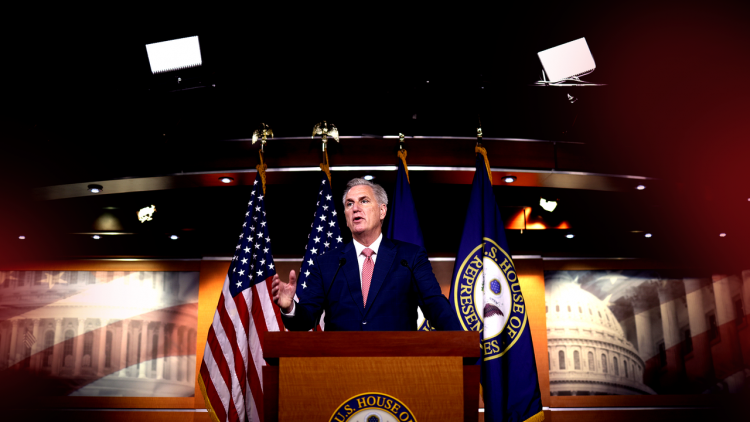 Remember Paul Ryan? He was House Speaker in 2018, the last time Republicans were in control. He left Congress quietly in the middle of the night. Well, not really, but sort of. Blaming “identity politics” and “polarization,” Ryan abruptly announced in April 2018 that he’d be exiting at the end of his term the following January, just as Democrats assumed power. Ryan went on to join the board overseeing the place that helped cause so much of that polarization in the first place, Fox News. Ryan may have reaped the benefits of Donald Trump moving into the White House—tax cuts!—but he didn’t have the stomach for MAGA. The same cannot be said for “my Kevin,” the little nickname the former president has given to Kevin McCarthy.

McCarthy helped rehabilitate Trump after the January 6 riots with a visit weeks later to Mar-a-Lago, where the two grinned side by side for a photo op. As fellow Republican Liz Cheney pointed out after McCarthy’s trip, “He’s not just a former president. He provoked an attack on the Capitol, an attack on our democracy. And so I can’t understand why you would want to go rehabilitate him.”

Tom Cruise Flies Into Our Home Video Pick of the Week

Maybe because McCarthy was desperate for the Speakership?

Now, with Republicans winning a slim majority in the midterms, that guy could be Speaker of the House—and honestly that’s the best-case scenario. McCarthy may be a cowardly sycophant, but he’s not full MAGA, something that MAGA-world is very much aware of. Though McCarthy won the Republican nomination for speaker on Tuesday, with 188 votes, dozens of members voted for Freedom Caucus member Rep. Andy Biggs—a signal that McCarthy might have to make major concessions to the party’s far-right flank in order to secure 218 votes before the full Congress in early January.

Meanwhile, the queen of MAGA, Marjorie Taylor Greene, is more than ready for Republicans to be in charge and apparently expects the likely next Speaker to appease the base. Regarding McCarthy, she told The New York Times that “to be the best Speaker of the House and to please the base, he’s going to give me a lot of power and a lot of leeway.” She even predicted Monday that she’d be on committees investigating “traitors and criminals.” McCarthy has said he plans to put Greene back on committees, with some of her Trumpworld allies reportedly urging the likely Speaker to give her a plum seat on the House Oversight Committee. Imagine, from promoting QAnon conspiracies to possibly landing a key oversight post in Congress.

“We have to have the gavel,” Greene said Tuesday in discussing her support for McCarthy. “That is extremely important, because the gavel means subpoena power. And Republicans need subpoena power going over the next two years.”

For Democrats, the outlook of a GOP-led House is grim. As Democratic representative Eric Swalwell texted me, “The GOP has laid a historic egg. Democrats ran on competence and contrasted it with chaos. And if Kevin McCarthy somehow holds on to become Speaker, he’s no Nancy Pelosi who can lead a narrow majority. McCarthy would be the leader of the land of misfit toys, a place that will exist exclusively as a vessel state of MAGA nation. A MAGA House majority will also operate as the largest law firm in Washington, DC, but serving just one client and his endless grievances. Functionally, without a Democratic votes it will spectacularly fail to execute its core functions: keep the government open, pay America’s bills, and fund the fight for freedom in Ukraine.”

What’s on the agenda? First a caveat, Republicans didn’t take the House by nearly as many seats as predicted. The anticipated “red wave,” or even “red tsunami,” never materialized, and Trump-backed Republicans were rebuked in several states. It took until Nov. 16—more than a week after results started coming on election day—for Republicans to reach 218 seats.

So perhaps House Republicans won’t be as emboldened as they would be if they had taken twenty or thirty, or—as McCarthy fantasized last year—60 seats. Maybe there will be some kind of power struggle between MAGAworld and the few remaining normalish republicans. Representative Richie Torres predicted, ”The House Republican Conference will have the barest majority, rendered ungovernable by the lunatic likes of Matt Gaetz and Majorie Taylor Green. The self-sabotage of an ungovernable Republican majority will all but guarantee that Democrats take back the House in 2024.”

Yet even without a MAGA mandate, it’s hard to imagine the Trumpiest Republicans not doing some crazy stuff when taking power. Expect a jacketless Jim Jordan yelling at everyone from Hunter Biden to Secretary Alejandro Mayorkas. There will likely be investigations into everyone from Vice President Kamala Harris to Nancy Pelosi’s third cousin once removed. Expect Gaetz grandstanding and delivering terrifying soliloquies that sound like opening monologues from OAN. House Democrats are already worried Congress will be a circus that has little to do with, you know, governing. “My fear is that the Republicans will just be about investigating Biden and obstructing progress instead of working to rebuild our economy and provide every American with opportunity,” Representative Ro Khanna texted.

There will surely be pressure on leadership to impeach Joe Biden—for something—and other administration officials, like Merrick Garland. Greene, who let Trump off the hook for inciting an insurrection at the Capitol, has already said Biden “is guilty of committing high crimes and misdemeanors.” Republican representative Claudia Tenney reportedly ran reelection advertisements over the summer on impeaching Biden: “Whether it is Joe Biden’s dereliction of duty at the southern border or his disastrous retreat in Afghanistan, I have called for Joe Biden to answer to the American people in impeachment hearings.” According to Rolling Stone, Trump has asked his allies in the House “how many” times they can impeach Biden. Connecticut senator Chris Murphy told CNN days before the midterms that it was “pretty apocalyptic about what the House will look like,” adding, “I think we’re headed for debt default, shutdown, constant impeachments, I think it’s a just absolute nightmare over there if Republicans win.”

But ultimately the worry that all of us have is about democracy, you know the thing that the Republican party seems to be hardening against. I’m not the only one who is worried about it. As voters were going to the polls last Tuesday, Representative Alexandria Ocasio-Cortez texted me, “I think one of the biggest concerns is if a party that has already tried to overturn the presidential election once will validate the results of the 2024 election or any other that they do not win.” Now that is real nightmare fuel.