None of us wanted to face it. Yet it had to happen sometime. Serena Williams announced this year not that she was retiring (there are few people to whom that word applies less) but “evolving away from tennis” to concentrate on other pursuits. Millions can remember the particular thrill of seeing her take the court at Wimbledon, Roland-Garros, or the Australian Open. If you were ever lucky enough to witness this in person, the excitement was that much more palpable. And her explosive energy during play was breathtaking. Her farewell match this September in Arthur Ashe Stadium at the US Open seemed to encapsulate 27-plus years of her legend. The 23-time grand slam singles champion and four-time Olympic gold medalist strode onto the court to thunderous cheers and applause that echoed in the New York night and seemed to last until dawn. She wore a Nike tennis dress, featuring a six-layer tutu, reference to her six US Open victories, and a jeweled headband with gems stamped into her hair. Somehow, her cheekbones seemed more regal
than ever.

Serena’s ever-changing fashion and hairstyles have always been part of her appeal. And there is purpose in her choices. After the president of the French Open banned a catsuit that she wore to help prevent blood clots in her legs, which she had experienced in the past and during the birth of her daughter, Serena rather pointedly went on to dominate in a tutu.

Serena embraces her beauty. She embraces her muscles and her curves. She embraces sisterhood and motherhood (her delight in her mini-me daughter Olympia is as plain as day). Most of all, though, she embraces her power. It’s a power that extends well beyond sports, beyond age or gender or nationality. And it’s not physical power. It is the power to inspire.

If Nichelle Nichols is any measure, there must be amazing beauty salons in space. For three seasons (1966-1969) of the original TV run of Star Trek, and in several of the movies that came later, she provided intergalactic glamour. She was a constant on the bridge of the Starship Enterprise as Lieutenant Uhura, chief communications officer. There she was at her blinking console, sitting with a dancer’s posture, the picture of futuristic efficiency in a ’60s bouffant, winged eyeliner, frosted lips, and green hoops (or other statement earrings) under her signature silver earpiece. She considered leaving the series after the first year to do a Broadway show, but, as the Los Angeles Times recounted after her death, a chance meeting with Dr. Martin Luther King Jr., an avid Trekkie, made her change her mind. Nichols recalled that King told her: “For the first time on television, we will be seen as we should be seen every day, as intelligent, quality, beautiful people who can sing, dance, and can go to space.” She stayed. And the world saw.

This year, we said farewell to two queens: Loretta Lynn, the queen of country music, and Elizabeth II, the queen of a country, kingdom, and commonwealth. One was born Loretta Webb “in a cabin on a hill in Butcher Holler,” Kentucky. The other was born Elizabeth of York in a grand house on Bruton Street in Mayfair, London. In 1960, Lynn released her first hit, “Honkey Tonk Girl.” That same year, a portrait of Elizabeth II appeared for the first time on the one pound bank note. Throughout her life, Lynn expressed herself freely and ascended to the highest levels of fame. Her best-selling memoir, Coal Miner’s Daughter, became an Oscar-winning film starring Sissy Spacek. Elizabeth II had fame she never wanted thrust upon her, and, as head of state, was barred from speaking her own mind. Her personal diaries may never see the light of day. But both queens were admired for their work ethic and staying power, their symbolism and dignity. Neither of their reigns will soon be forgotten.

The One That We Wanted

Australian British singer Olivia Newton-John managed to embody some of the biggest American pop culture stereotypes: bobby soxer (Grease), neon, ’80s gym bunny (“Physical”), roller-disco ingenue (Xanadu). If being inoffensive were an art form (which it most certainly is not), Newton-John would be its Leonardo da Vinci. Her perpetual perkiness and Top 40 singing made her a huge star of the ’70s and ’80s. But it was her role as a breast cancer survivor, thriver, fundraiser, and advocate for research that was the most meaningful. She founded the Olivia Newton-John Cancer Wellness & Research Centre at Austin Hospital in Melbourne and left a legacy of hope and healing for thousands. She once sang “You have to believe we are magic.” In the end, she was. 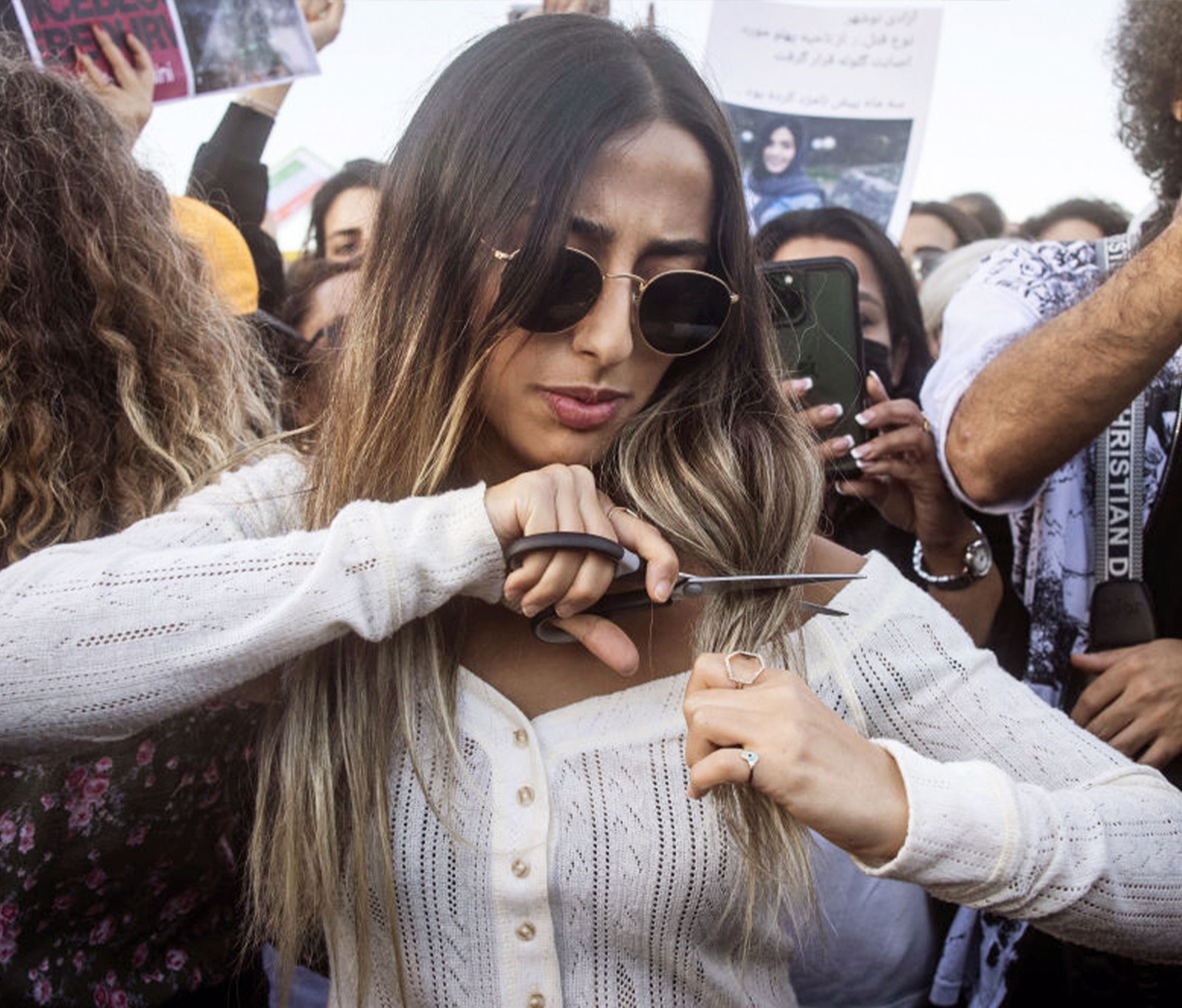 Iranian woman cutting her hair in protest at the Iranian consulate in Istanbul.