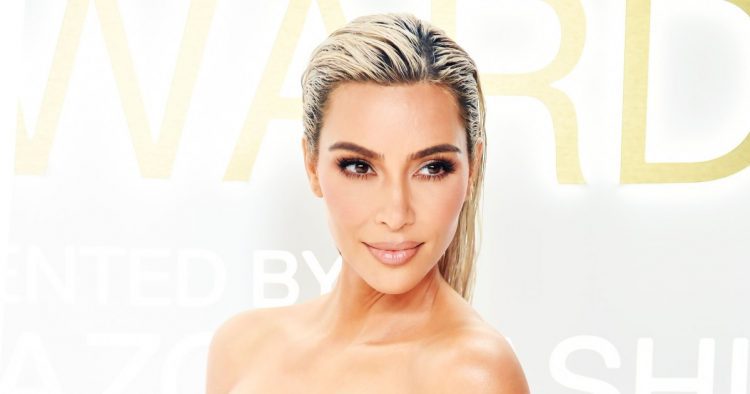 No extensions, no styling. Kim Kardashian flaunted her real hair in a rare TikTok video while singing Christmas tunes with her daughter North West on December 24.

In the video, Kim, 42, and her eldest daughter lip-synced the song “Baby It’s Cold Outside” while in their morning holiday attire. Both were dressed in their pajamas while Kim sported a fresh out-the-shower wet hair look with *very* short hair. The beauty mogul had the internet shook after she showed her chopped blonde locks, which fell just above her shoulders. Usually, she’s rocking lengthy extensions that add inches to her hair length.

“Kimberly’s hair must be tired because of the bleaching,” the caption read.

Fans in the comment section came to the SKIMS founder’s defense, while others criticized her au naturale mane.

“She wears extensions nonstop and bleaches it every other week OFC it’s damaged,” one Instagram user wrote.

“WTF is wrong with people? Do you guys sometimes forget she’s human too? There’s absolutely nothing wrong with her hair … I wish we would all see the real faces of trolls sometimes to know if they’re any better,” a second person commented.

The Keeping Up With the Kardashians alum dyed her hair bleach blonde in May to fully replicate her Marilyn Monroe ensemble at the Met Gala. However, her new color wasn’t just for the night as Kim just recently went back to brunette.

After debuting her lighter locks, Kim detailed the transformation to Vogue the same month.

“I did want a physical change, too, so I thought I would wait and do it for this, so I’m spending a day straight dyeing my hair — 14 hours straight! — to get it done,” she explained.

“The hair look was simple to highlight the platinum color, giving the hair color and dress the attention,” Kim’s go-to hairstylist said, adding, “I wanted it to be iconic to Marilyn, but also iconic to Kim when she has her blonde moment.”

In August, Chris, 39, posted a mirror selfie of the reality star as her blonde hair was tied into the “Pamela Anderson updo.” In the Instagram caption, he asked his followers if Kim should stay blonde or “bring the black back.”

While fans were split in their votes, Kim kept the color until Chtockristmas Eve when she debuted her long, brunette hair at their annual holiday party.