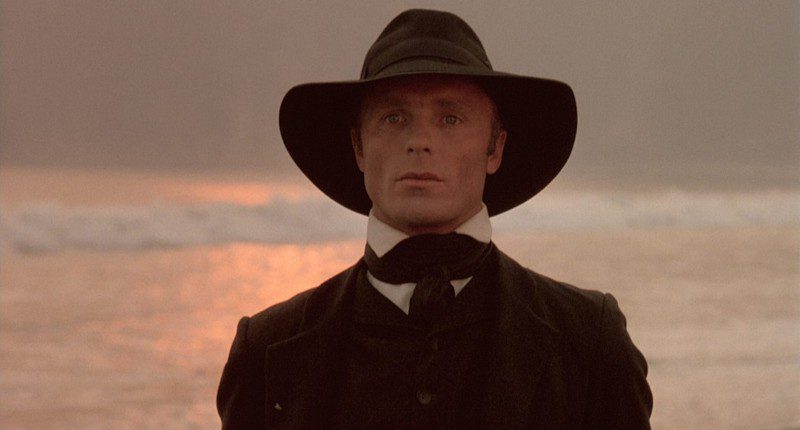 What is it? A crazy true story about the time an American was the dictator of Nicaragua.

Why see it? Some stories are too bonkers to believe, and the subject of Alex Cox’s 1987 masterpiece is one such historical footnote. William Walker was an educated man turned mercenary in the 19th century whose move into Nicaragua saw him take control of the country for several months. He had American support, at first, but his antics revealed a highly unstable man heading toward implosion. Ed Harris is a charismatic wonder here headlining a terrific ensemble delivering a surprisingly creative and funny movie. Cox takes an increasingly anachronistic approach ensuring big laughs and sly observations along the way. It’s a subversive gem, and the extras included on the new Criterion disc are filled with more insight and thoughts. Pick this one up, people!

What is it? Two brothers bond over bicycle racing and medical conditions.

Why see it? The first of Warner Archive’s two Kevin Costner releases is a fine sports drama that manages some emotion and minor thrills alongside its race sequences. Costner plays older brother to David Grant, and the pair find some compelling drama in their family dynamics and situation. Rae Dawn Chong and Alexandra Paul join as love interests and are given more to do than expected. John Badham’s direction is solid throughout but shines during the race sequences which find energy and danger along the scenic route.

What is it? Five college graduates come of age in 1971.

Why see it? Warner Archive’s second Kevin Costner release is his first feature collaboration with director Kevin Reynolds (Waterworld, Robin Hood: Prince of Thieves). It’s an affecting, humorous coming of age tale set at the tail end of the Vietnam War that follows five friends on a road trip towards adulthood. Costner plays the de facto leader of the group which includes Judd Nelson, and together they laugh, fight, and discover what’s really important in life. Reynolds infuses the character piece with fun beats including some impressive airplane/helicopter action and an impromptu wedding. It’s a good one about a simpler time.

What is it? A social worker discovers a shocking truth.

Why see it? Daily life is filled with so many transgressions, big and small, that many are often allowed to fade into obscurity. This film highlights one that demands attention — the UK government began a program in the late 40s shipping “orphans” to Australia for a better life, but many of the kids were told their parents were dead while the parents were told their child was in a good home — but wasn’t publicly acknowledged until 2010. Upon arrival in Australia the children entered foster care, and many were abused at the hands of a religious home. It’s a powerful watch with a pair of strong supporting turns by Hugo Weaving and David Wenham.

What is it? Part Man, Part Machine, All Cop.

Why see it? Paul Verhoeven’s 1987 masterpiece targets corporate shenanigans in a world that’s constantly for sale (ie the real world). A cop is gunned down, one of many, and the company currently running Detroit’s police department turns him into a cyborg product. Of course, you can’t keep a good cop down, and soon he’s rebelling against his masters while also targeting criminals left and right. Big action, big laughs, and lots of bloody squibs make for a fantastically entertaining satire that never gets old. Here’s hoping no one ever tried to remake it.

What is it? Never trust a magician.

Why see it? The third “standalone” Spider-Man film under Marvel’s guidance is arguably its best yet despite a fairly stupid finale. The ending can’t tank the film, though, as the movie delivers real heart and emotional weight along the way. Doctor Strange tries to help young Peter and instead sets in motion a messed up chain of events by opening a rift into the metaverse. The highlight here is the arrival of two past Spider-Men, and both bring laughs, depth, and rich character to the proceedings. The disc has the usual generic extras typical of the MCU releases, but honestly the movie itself is worth the pickup.

What is it? A man jumps bodies every twelve hours.

Why see it? South Korean genre cinema is always worth watching, and this recent gem is a great example why. A man wakes after a car crash, but it’s not his reflection in the mirror. Twelve hours later he jumps into another body, and so it goes as he finds himself in a race against time to discover who he is and why he’s leaping from person to person. Throw in some terrific action sequences, and this becomes a terrifically entertaining watch delivering big thrills, emotion, and philosophical observations.

What is it? A scientist creates life with deadly consequences.

Why see it? The conceit here was well-intentioned — give Mary Shelley the same recognition afforded Bram Stoker — but the execution leaves a lot to be desired. Kenneth Branagh stars and directs, and the film is a surprising slog that feels like an exaggerated costume drama. The pieces don’t work, the casting is off (including Robert De Niro’s turn as the monster), and we never really feel the intended epic nature of it all. Arrow’s new 4K restoration is fine and retains the grain of the original.

What is it? A killer stalks Los Angeles during the countdown to New Year’s.

Why see it? As far as holiday-themed slashers go, this one makes good use of its holiday of choice even if the resulting film is pretty standard. There are some engaging beats here as the film plays fast and loose with its killer — someone’s calling threats, someone else is killing women, and 80s stalwart Grant Cramer is acting all kinds of weird. It’s probably played a bit too straightforward for its own good, but it’s an entertaining enough tale for genre fans as a handful of surprises and diversions keep viewers on their toes until the end.

What is it? A giant octopus terrorizes a coastal town.

Why see it? As far as Jaws knockoffs go, you really can’t dismiss one that opens with a baby in a stroller being the first victim. Director Ovidio Assonitis keeps things PG-rated, like its inspiration, and brings in the expected characters like an expert, officials who don’t listen to warnings, and others. It’s silly stuff with mostly bland kills, but we get some exciting sequences too as the octopus attacks boats. One shot showing the aftermath of an attack during a race is pretty fantastic. Add in a stellar Steve Cipriani score, and you’ve got a fun time at the exploitation cinema.

Through the Decades 10 Film Collection: 1980s

Why see it? Mill Creek’s 4-disc set collects ten wholly unrelated films from the 80s, and as you’d expect, some are better than others. The highlights here include Roxanne, The New Kids, Band of the Hand, Little Nikita, Suspect, and Blue Thunder. Less appealing are the likes of Like Father Like Son, Vice Versa — make it a body swap double feature! — Punchline, and Who’s Harry Crumb? This would lean towards a buy recommend if the films featured any extras, but they’re all barebones.

Through the Decades 10 Film Collection: 1990s

Why see it? Like the release above, Mill Creek’s collection of ten arbitrary films from the 90s comes on four discs and with zero extras. The good ones here include White Palace, Donnie Brasco, The Freshman, Anaconda, and I Know What you Did Last Summer. The lesser titles are Housesitter, The Matchmaker, One True Thing, The Deep End of the Ocean, and The Devil’s Own.

Also out this week: