Invictus Games is Now The Meghan Markle Show And More! 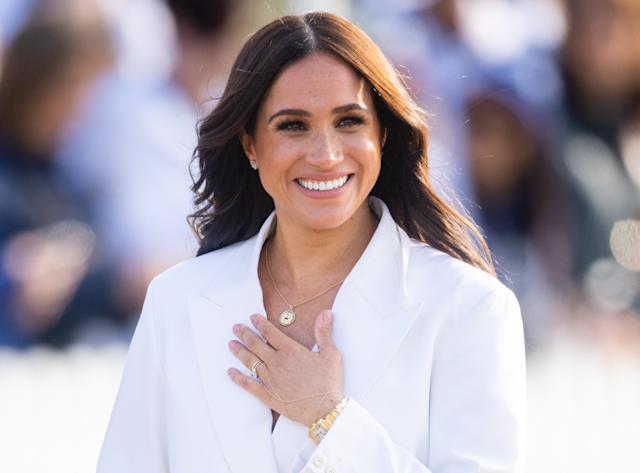 Meghan Markle has turned the Invictus Games at The Hague into a fashion runway: Before Meghan ruined Harry’s manhood and turned him into a whinging simpleton, the Invictus Games used to be the Duke of Sussex’s baby. While we’re all for supporting wounded service personnel, Harry isn’t the patron they should be idolising. He has taken something good and twisted it into something that lines his pocket with cash. Not to mention, Meghan has turned the event into a runway for her poor fashion choices.

In the leadup to Invictus, the public has questioned why Harry could attend the event, but not his grandfather, Prince Philip’s memorial. We agree, but his obsession with security has been covered either by the Dutch government or by Netflix, which is also filming Heart of Invictus. He’s a hypocrite as he can do this but then visit his grandmother (which we’ll cover later in this post) without anyone knowing before leaking it to the media.

This post is made up of smaller stories that wouldn’t fill the space of 300-word posts.

Invictus At The Hague

The Sussexes arrived at the Hague but without as much fanfare as possible. However, the event is allegedly not sold out. People are beginning to see that Harry is not the person he once was, and having Meghan tag along is likely a sore spot. King Willem-Alexander, Queen Máxima and Princess Beatrix attended Prince Philip’s memorial. Like all the other foreign royals in attendance, there was more security than anywhere else. It would’ve been more than safe for the Sussexes to appear.

The point is that the people are not going to forgive them for the digs they took at the British royals during the Oprah interview. We’ll cover this a bit more in detail later, but the Dutch royals are doing what they can to put as much space between themselves and the Sussexes as they are able.

More Intel On The “Secret Visit” To England

So, as we stated in our previous post on the “secret visit” to England, it’s not a secret if everyone knows about it. Anyway, more information has come out regarding what the Sussexes did while they were in the UK.

It is being reported that the Sussexes visited Windsor Castle en route to the Invictus Games. While there, they also spoke with Prince Charles and Camilla. What we wouldn’t have given to be a fly on the wall for that conversation. It’s speculated that the Queen had to talk them into speaking with the Prince of Wales and the Duchess of Cornwall after trashing them on multiple occasions.

However, the Sussexes did NOT meet with the Cambridges. People have been asking why they didn’t. The answer is that they’re not in the country. Kate Thomas of Hello Magazine reports that the family is currently on a skiing holiday.

Thank god William, Catherine, and the kids weren’t present. Who knows what would’ve happened. For all know, Harry and Meghan might’ve been recording the Queen, Charles and Camilla secretly. After all, it has been speculated that the Netflix crew was seen driving with a blacked-out car (allegedly containing the Sussexes) with a police escort coming out of Windsor Castle.

Also, it is speculated that The Queen summoned the Sussexes to see her.

Going back to the Invictus Games, some images came out where Harry looked increasingly unhappy. Unfortunately, the pictures are hard to find on Google images, but @MaggieMobrules posted one of the photos on Twitter. So we won’t post it here, but if you want to see it, please use the link.

There’s been speculation floating across Twitter that Harry is high, drunk, or had botox injections in these photos. This is not the first time pictures have emerged of Harry looking unlike his old self. We think he is trying to cling to his marriage with everything he has, even if it makes him unhappy. What’s more, he is doing this to prove to his family that he is not a failure.

So, this piece of information is about a week and a half old, but we wanted to include it anyway. King Willem-Alexander and Queen Máxima will NOT be allowing the Sussexes to reside in one of their palaces. Nor will there be any audience. Instead, his Majesty The King and his aunt, Princess Margriet, will attend a separate event. Willem-Alexander will appear at the closing ceremony, while Margriet will be at the opening ceremony as per Britanni Barger of Royal Central.

Usually, if a foreign royal is on business within the Netherlands, they will be allowed to stay at one of the palaces. However, since the Sussexes are no longer working royals, they are treated like every other non-royal foreign guest. So they have to stay in a hotel. It’s rather sad as it also shows how irrelevant the pair have become.

The Potentially Empty Promise To The Queen

It is speculated that Harry and Meghan promised Her Majesty that they’d bring Archie and Lilibet with them the next time they’re on UK soil. This, to us, seems like an empty promise. When is their next visit going to be? It could be months before they decide to fulfil their promise. They weren’t kind enough to go to the UK when Prince Philip was dying. Also, we don’t care if the excuse at the time was Meghan’s pregnancy. She wasn’t that far along.

After all, she went to New York for a half a million dollar baby shower six to seven weeks before Archie’s arrival. Oh, wait. She told Oprah that she was locked away from the public for months. So please, spare us the pageantry.

Russell Myers of the Mirror is reporting that the Cambridges knew the Sussexes would be returning to the UK. He added that the meeting with Her Majesty was “warm and cordial.” Do we believe that the Sussexes went to the UK to tell the Queen she’ll see her great-grandchildren soon? No. Of course, we don’t. If anything, the Queen probably called upon them for some reason. Could it be that they were stripped of the dukedom, or something terrible is about to happen? We don’t know and probably never will.

For our second-last story, two theories have popped up regarding the so-called “surprise” that the Sussexes are going to unveil at the Invictus Games. The first is that the kids will be wheeled out and paraded on stage. Theory two is that Meghan is pregnant again.

Now, both theories appear to cancel each other out. The kids weren’t with their parents in the UK as far as we know. Also, after Liibet’s birth, they said they wouldn’t have any more children as they wanted to “preserve the environment.” They even got a fake award for it. So, if another baby is on the way, would they have to hand their award back for breaking their promise?

Finally, we reach the end of this post. As you probably saw in the feature image, Meghan was wearing a white suit. Hmm. Where have we seen that before? Oh, wait. We know! Catherine, the Duchess of Cambridge, wore a white suit recently. So if you were to ask who was dressed better, we’d go, Catherine.

As they often say, first in, first served. So the Sussex Squad can scream that Catherine stole Meghan’s look, but they don’t care to do thorough research. So instead, the Duchess of Cambridge saw her suit while on the Caribbean tour with her husband, Prince William.

Meghan saw the images of Catherine, became her usual jealous self and is trying to steal the future Queen Consort’s thunder again. Unlike her sister-in-law’s tailored outfit, the Duchess of Sussex’s suit was too big for her, and the pants were not tailored. In addition, she has a crapload of money.

She should be able to afford to get the pants pulled up, so they’re not a trip hazard. Unfortunately, nothing is inspiring about Meghan’s outfit. She’s nothing more than a royal copycat.