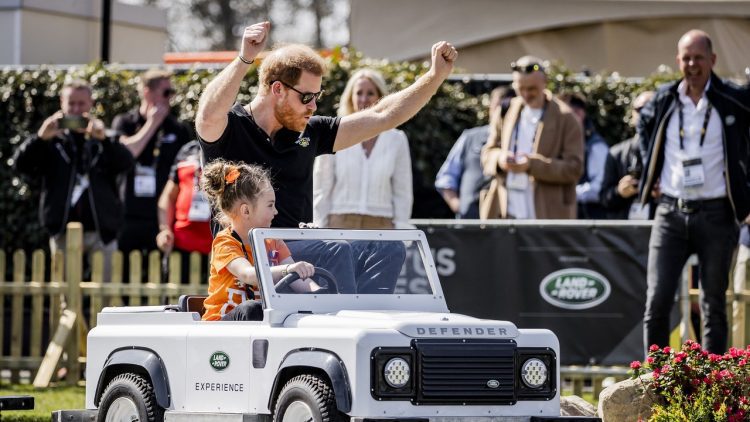 The Duke and Duchess of Sussex are in the Netherlands this weekend, readying for the commencement of the Invictus Games. One of the highs of their Low Country tour thus far was a Friday visit to the Jaguar Land Rover Driving Challenge. Wearing casual clothing (polo shirts! blue jeans!) Harry and Meghan cheered from the sidelines of an obstacle course in the Hague.

At one point during the event, Prince Harry hopped in one of the vehicles to aid in the navigation across the site’s unusual topography. Meghan was reportedly cheering her husband on as he… sat beside the driver who did all the work. You can see him sticking his head out of the window as the Black Eyed Peas play on the P.A. system.

Harry and Meghan made a similar appearance in 2018, prior to the Invictus Games in Sydney, Australia. The Netherlands trip marks the couple’s first visit to Europe since they moved to California in 2020. While they’ve been on the far side of the pond, they attended a ceremony for bringing members of the American and Ukrainian teams together. They also reportedly had a “peace summit” with Queen Elizabeth and Prince Charles over in London.

The Invictus Games, which draws its name from a poem written by William Earnest Henley, is an international sporting event for wounded veterans. Harry founded it after being inspired, in 2013, by a visit to The Warrior Games in Colorado Springs, Colorado. The first Invictus Games, in 2014, was held in London. It has since been held in Orlando, Toronto, and Sydney. This year’s tournament in the Hague was postponed for two years due to the pandemic. Next year’s event will be in Düsseldorf, Germany.

— How Princess Diana’s Press Strategy Impacted William and Harry
— The Johnny Depp–Amber Heard Trial: How Did It Come to This?
— The Rich Are Rotting in the Mildewed Age
— Prince Andrew Really Just Cannot Seem to Stop Himself
— 11 New Books to Read This April
— Will Smith Banned From the Oscars for 10 Years After the Slap
— Susan Cain, Chief Introvert, Ventures Into the Sublime
— From the Archive: How Did Johnny Depp Find Himself in a Financial Hole?
— Sign up for “The Buyline” to receive a curated list of fashion, books, and beauty buys in one weekly newsletter.