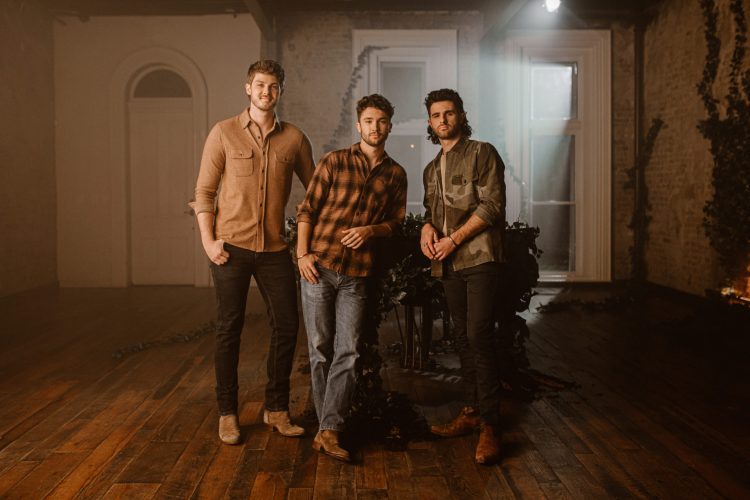 This past year alone has been a whirlwind for the country trio, Restless Road. From festivals, performing on ABC‘s The Bachelor, to sending their first song to country radio, the trio is set to continue to soar to new heights throughout the year.

Their recent single, “Growing Old With You” saw career-changing success throughout the past few months. Since the release, GOWY has been streamed nearly 9 million times on Spotify alone.

“We started sharing it maybe like over a month ahead of the release date,” tells Zach. “We could tell right away that people were really connecting with the song and they were excited for it. when they came out, it quickly started performing better than any other song we put out.“

This song alone has simply brough another field of avenues for the rising band. Signed to Kane Brown‘s label, 1021 Entertianment, a joint venture with Sony Music Nashville, the trio saw a career milestone has “Growing Old With You” made their first song being pushed to country radio.

“Mom, we made it!” tells Zach. “Being on the radio has been a dream since day one with with this band, and we’re just so blessed that it’s finally happening.”

Aside from country radio and TikTok, they had the opperunity of a lifetime happen right at a pivital point in the release of the song. The trio shared a special performance on Clayton Echard season of ABC‘s The Bachelor.

“We released the song then The Bachelor happened the next week. That really blew the lid off the thing,” Zach expresses, emphatically. “That was a really special moment being huge Bachelor fans as well. It’s just been it’s been a dream come true!”

With all this scuess, Zach, Garrett, and Colton have prepared for a moment they’ve been waiting for for awhile. Last week, they debuted in Milwaukee, Wisconsin for their opening night of their first headlining tour.

David J, Jordana Bryant, and serveral other artists will be joining Restless Road on a select date of their “Bar Friends” tour.

“We’ve been really blessed and really fortunate to have a lot of videos go viral,” explains Colton. “And because of that, being able to build our fan base what it is now.“

With everyting on the rise for these guys, their future throughout country music is unfolding with every chapter. This Friday, Restless Road will be releasing a first dance version of their single “Growing Old With You.”

You can catch Restless Road throughout the states the rest of this year by visiting www.restlessroad.com.