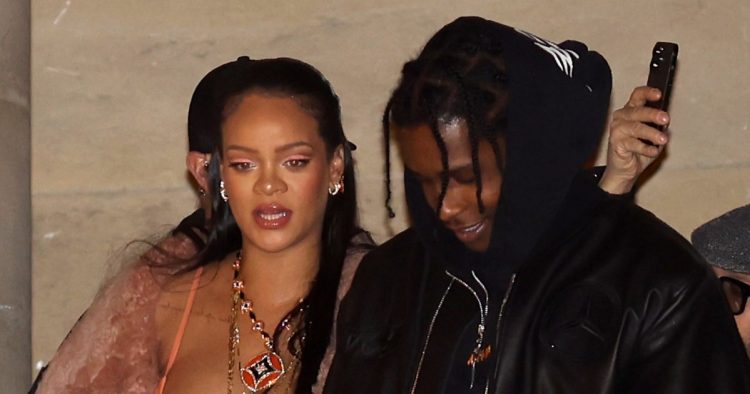 She wants him to stay! Rihanna and A$AP Rocky formed a strong bond as friends first then lovers later and now, parents-to-be! As fellow music artists, the pair worked together before they started dating. From performing as the opening act a few times throughout Rihanna’s 2013 Diamonds tour to his successful “Fashion Killa” music video, A$AP Rocky was there for the “Stay” singer since the start of their bond.

At one point in the playful music video, the “Praise the Lord” rapper, 33, and Rihanna, 33, explore fashion choices together as she is dressed up in a zebra-print floor-length dress.

Although the duo had sparked dating rumors a few times early on in their friendship, some noticed that they got closer following the “Umbrella” singer’s split from former beau Hassan Jameel in the beginning of 2020.

“The hardest part of working with you for Fenty Skin was getting your approval on your images,” the skincare entrepreneur jokingly said while the pair interviewed each other for Vogue in August of that year. “Because your skin is pretty, regardless. That’s why we hired you, you know what I’m saying?”

Now that the couple aren’t shy to appear together in public, it seems the two are inseparable, as some close to them have even noted an engagement is possible.

“These two are so madly in love, and it’s true there’s a lot of buzz in their circle about an engagement being in the works,” a source told Us Weekly on August 26. “Going by the hints Rocky’s been dropping, [it] may well happen soon, but there’s no pressure and what matters most to both of them is to keep building on this truly beautiful thing they’ve got going.”

Since the “Work” artist and the “Everyday” rapper have had their fair share of former romances, they consider their love “unlike any connection they’ve ever experienced with anyone else,” the insider added at the time. They don’t need a piece of paper to be happy, but Ri’s a real romantic and her friends and family — her mom, especially — would love to see her married.”

However, the pair have not formally announced an upcoming wedding.

Scroll through the gallery to see A$AP Rocky and Rihanna’s relationship timeline.