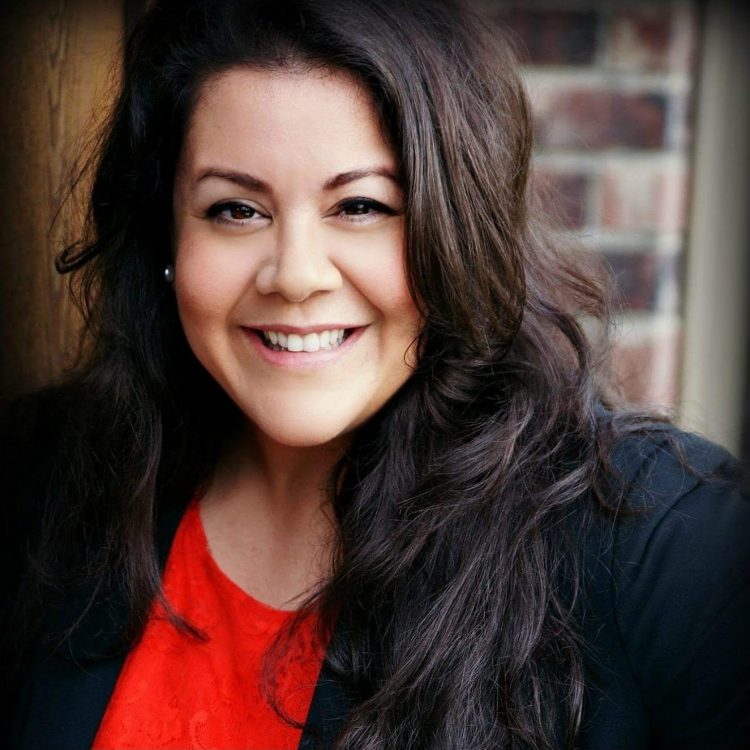 “Why don’t we start with the elliptical.”

It was 2012, and my first session with a personal trainer.

“…since the weights will be too hard for you.”

“Wait what?” I wondered, “Too hard? Why would you say that?”

He kept talking: “After all, we need to work that tummy off!”

Mortified, I glanced down. My tummy. Like the rest of me, it was large.

It wasn’t, however, why I’d signed up for training.

My fingernails stabbed my palms.

Maybe, I thought, if I explain things to him, he’ll understand my background and my goals. My desire to please, however, stopped me from talking.

Instead, I got on the elliptical.

“See you next session,” he chirped when the workout was over.

But there was never going to be another session—at least, not with him. For over five years Kelly Fucheck has coached CrossFit, showing how anyone can move their body and be powerful no matter their size. Connect with her at A Size Strong.

Several months after that personal training session, I walked into a CrossFit box.

When I saw the barbells—and the people using them—I lit up.

I knew, instantly, that this was the type of strength training for me.

When the instructor told us to set up and showed the class how to deadlift, I loaded my barbell and looked at those 125-pounds of iron with anticipation.

Then the trainer walked toward me and removed one plate, then another.

Confused, I asked, “Is something wrong?”

“I’m not sure if you’re quite strong enough for that yet,” he said.

Heat rushed to my face.

I was more than strong enough. Possibly stronger than the smaller-framed people in the class.

He didn’t know that because he hadn’t asked.

Seeing my body, he’d assumed there was no history, nor personal bests.

He looked at me and he saw a beginner, both in his class and in fitness in general. Again, I said nothing. At that time in my life, I had no confidence.

I just wanted to fit in. I did as I was told.

Get a deeper understanding of nutrition, the authority to coach it, and the ability to turn that knowledge into a thriving coaching practice.

Many people get a lot wrong about larger people like me.

They tend to associate a large body with weakness.

They also mistakenly think we’ve never tried to change our shape or size, which is rarely the case.

Not long ago, I settled onto an examination table for a wellness check.

Before asking about my history, the new doctor said, “How do you feel about trying to lose weight? Losing 10 percent of your body weight could…”

My stomach churned with anger, shame, and disbelief.

In the flimsy paper gown I felt exposed. I stared at him, blinking faster and trying to process how I was going to tell him that I’d already lost 50 pounds. That was more than 10 percent of my body weight already.

Again, this health professional hadn’t asked about my history or my current habits. He just assumed.

At age 8, I was, as people say, a big girl—but that’s not what my dad saw when he looked at me.

He saw my potential, my strength, and my beauty.

Dad had huge brown eyes that welcomed people in, a roaring laugh that could put a smile on the grumpiest person’s face, and a contagious can-do attitude.

As he often said: “There’s no reason you can’t. Can’t never could.”

Several times a week, he invited me to join him at the firehouse where he worked. In the TV room there was a weight bench, a set of dumbbells, and a Smith machine. With the scent of spaghetti, chili, and cornbread wafting in from the nearby kitchen, Dad cranked the music and asked, “You ready?”

In each of those sessions, he encouraged me to do things that, initially, I thought weren’t possible.

At least, not for a girl.

Each session left me feeling strong, capable, and proud.

Inexplicably, I didn’t stick with it.

My parents divorced. Dad moved out. I grew into a self-conscious teenager and young adult who smoked.

By my 20s, the scale read 284 pounds and my doctor described me as “morbidly obese.”

Then, in my 30s, I suffered a stroke, and I vowed to get healthy.

My wellness journey began with walking on the treadmill for two minutes.

It involved daily battles with self doubt and depression.

There were slow, awkward improvements with diet and the treadmill—and, eventually, a love affair with the barbell.

By the time I met with that trainer in 2012, I was down 30 pounds and running half marathons. When I met with the second trainer at the CrossFit box, I was down 50 pounds—and able to deadlift 125, easily.

I’m no weakling. Not physically—and not mentally. Losing weight and keeping it off ranks as one of the hardest things I’ve ever done.

And it’s right up there with walking into the gym.

No matter how strong I become, people continually underestimate me—based solely on my appearance.

Some people might wonder: What keeps me coming back?

On my hardest days, however, it’s my dad who gets me through the doors.

Back in 2014, he was rushed to the hospital with pancreatitis. Three weeks later, at age 57, he died.

I still mourn his loss. Every single weight session helps to keep a part of him with me.

“I’m going to do this and I don’t care what anyone else says,” I tell myself whenever self doubt tries to stop me.

Sometimes I wish I could go back in time—I’d be louder, advocate, educate.

Instead of swallowing my words and doing as I was told, I’d explain to those health professionals there’s more to me than my size.

“Hey, I’ve lifted before,” I imagine myself saying, “I’d love to show you what I can do.”

I’d suggest that doctor take a full history before skipping straight to the advice.

I also wouldn’t mind telling dozens of people, “I know you’re staring at me.”

And that those “good for you, honey” comments can really sting.

Mostly, though, I want anyone with a body like mine to know this:

Keep your purpose in your pocket.

When you’re scared, intimidated or feeling unworthy—and you will be—remember why you’re doing this. Keep it close to you and know you can do anything.

Your why will keep you going. And I’ll be right there with you.

If you’re a coach, or you want to be…

You can help people build nutrition and lifestyle habits that improve their physical and mental health, bolster their immunity, help them better manage stress, and get sustainable results. We’ll show you how.

If you’d like to learn more, consider the PN Level 1 Nutrition Coaching Certification.