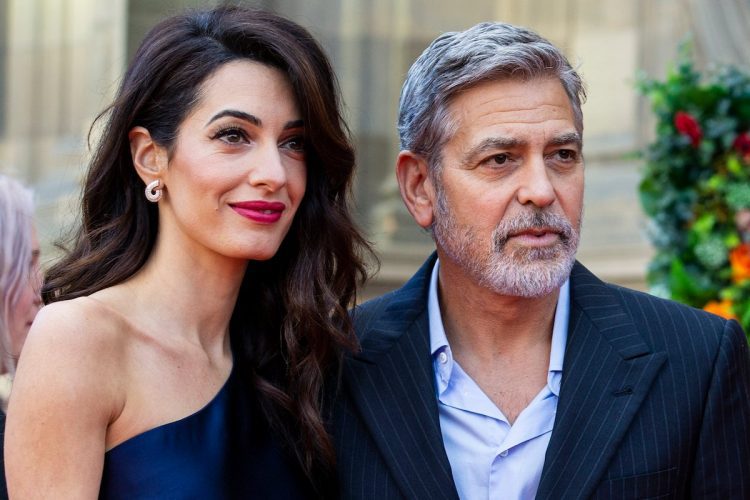 Did Amal Clooney warn George to keep his distance from a certain actress? Around this time last year, one tabloid claimed Amal was seething with jealousy. Let’s check back in on the Clooneys.

George Clooney Too Close With Co-Star?

Last April, the National Enquirer reported Amal Clooney was getting worried about George reuniting with Julia Roberts in their upcoming flick, Ticket to Paradise. “They’ve had a flirty dynamic from the jump, and it drives both of their spouses crazy with jealousy,” a snitch dished. “Amal has always been suspicious of George’s relationship with Julia—especially since she often came to George for advice when she had trouble with Danny [Moder].”

Apparently, even Roberts’ husband was worried about her friendship with George. Sources said George had been “on thin ice” with Amal after inviting his parents to move in with them, and things were already tense for the couple after George had a medical emergency on the set of Midnight Sky. “Amal is fed up with George’s risk-taking and making selfish decisions with her input,” the tipster confessed.

But apparently, George was feeling like he needed a break from Amal. “George and Julia know they have chemistry, and both of them want to use it to make a hit flick. They also enjoy each other’s company and are on their last nerve with their spouses,” the insider concluded. “They want to do this—but they also both know they’re playing with fire!”

We were immediately skeptical of this story, so we did some digging. Despite the magazine insisting that the Clooneys’ marriage was under stress, it really seemed like they were doing better than ever. George told People back in 2020 that he and Amal had never really had a fight, proving that he and Amal truly have a rare gem of a marriage.

Furthermore, George and Roberts aren’t getting too cozy on set. The actress is a married woman, and despite the many tabloid articles accusing Roberts of having a rocky marriage, she and Danny Moder also seem to be getting along just fine. Roberts and George are A-list actors; they are among some of the most respected people in their profession. So, it’s just bizarre to suggest they’d be anything other than professional on the job.

And more recently, George confided in People once again that he and Roberts are getting along like a housefire, and their new film is sure to be a hit. “It’s going great, man. We’re having the time of our lives,” Clooney said. He also said that Roberts’ role in the movie was a big draw for him.

“The minute I read [the script] I called Julia, and I said, ‘Did you get this?’ and she said, ‘Yeah,’ and I said ‘Are you going to do it?’ and she goes ‘Are you going to do it? and I said, ‘Yeah, if you do it,’ ” he added. “So it was just one of those very lucky things.” Clearly, George is excited about the new project. So, it’s just insulting to suggest Amal would rain on her husband’s parade.

The Tabloid On George And Amal Clooney

Of course, the National Enquirer hasn’t gotten any more accurate over the last year anywhere the Clooneys are concerned. Back in October, the outlet reported Amal was seething with jealousy over George’s friendship with Jennifer Aniston. Then the magazine claimed “henpecked” George Clooney was giving up on Hollywood to save his marriage. And more recently, the publication alleged George and Amal were fighting over the actor’s drinking. Clearly, the Enquirer doesn’t really have any insight into the Clooneys’ marriage.