Machine Gun Kelly‘s performance of “Twin Flame” at the 2022 Billboard Music Awards on May 15 had fans doing a double-take. During the 31-year-old rapper’s set, which was a last-minute replacement for The Red Hot Chili Peppers who pulled out last minute, he revealed he wrote the song for his “wife,” Megan Fox, 35. He also made a shout-out to his and Megan’s “unborn child.” Megan and MGK got engaged in January, but have not announced a wedding or a pregnancy.

Of course, his remarks immediately had fans buzzing with speculation that they’re expecting their first child together. “Megan fox preggers???? Did mgk just say our unborn child!!!!! Wait!!!!” one shocked viewer exclaimed on Twitter. “Apparently Megan Fox is Pregnant! Hell of a way to announce it,” another added. “So is Megan Fox pregnant since MGK did a shoutout to their unborn child or are they trying for a child?!?” a third person questioned, with dozens of other Twitter users wondering the same thing. At the time of this writing, neither Megan nor Machine Gun Kelly has made a statement about the speculation.

Although it’s uncertain if the lovebirds are married and/or expecting, an inside source EXCLUSIVELY told HollywoodLife in March that they definitely want to have a child together. “A baby is 100 percent in the plan for Megan and Colson, it’s something they’ve been openly talking about since they first got together,” the source revealed. They added that the actress and rapper “believe they’re destined to be together and destined to have a child together, but they’re letting it happen naturally, they’re not super focused on it.”

Billboard Awards 2022: See All The Photos From The BBMAs 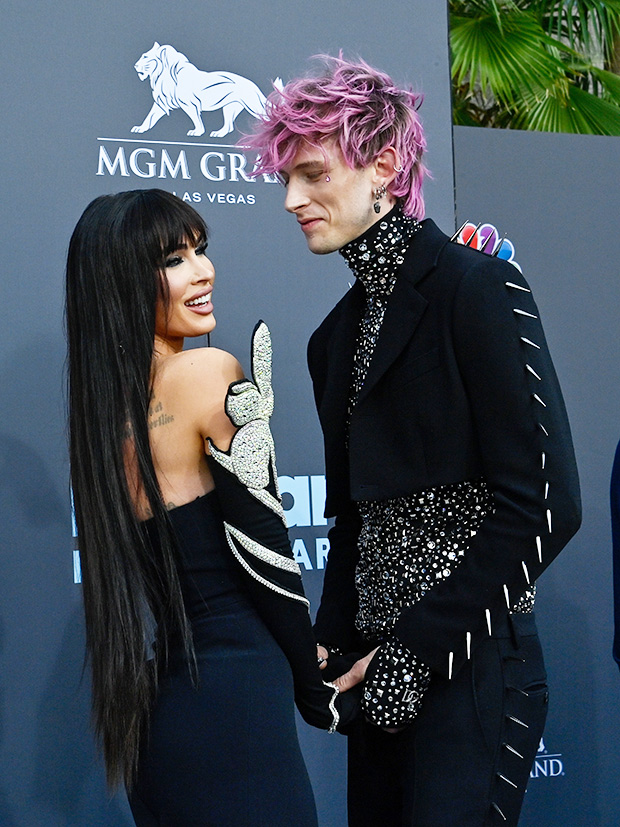 Megan and Machine Gun Kelly both have children from previous relationships. Megan was married to Brian Austin Green, 48, between 2010 and 2021 and they had three sons together: Noah, 9, Bodhi, 8, and Journey, 5. Meanwhile, Machine Gun Kelly has a 12-year-old daughter, Casie, who he fathered with an ex-girlfriend.

If the couple did tie the knot, it wouldn’t be the first surprise wedding of the day. Megan and Machine Gun Kelly’s frequent double date partners, Kourtney Kardashian, 43, and Travis Barker, 45, became legally wed on May 15 in Santa Barbara. They were spotted taking “Just Married” photos shortly after an intimate ceremony took place at the Anacapa courthouse.

Rauw Alejandro: 5 Things To Know About The Puerto Rican Singer Performing At BBMAs