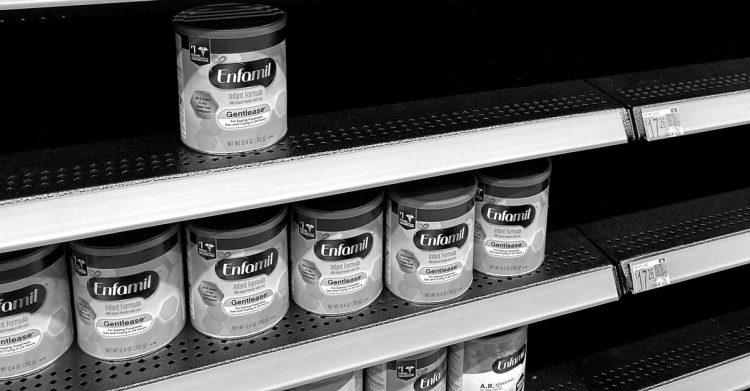 Keeping an infant fed is a precarious task in the best of circumstances, and for many American parents, the circumstances have become quite bad. Nutritional formulas are currently in very short supply across the United States, and in some markets, more than half of all products are out of stock. For babies with medical conditions, as well as older kids and adults whose lives similarly depend on access to specialty nutritional formulas, the situation is nearing catastrophe. Because it can take weeks for increased production to show up on store shelves—and because most factories were already functioning near capacity—the shortage is likely to get worse before it gets better.

In an acute sense, this chaos was caused by the February shutdown of a large Abbott Nutrition manufacturing plant in Michigan and an associated product recall, following the deaths of at least two infants, which the FDA believes were connected to tainted Similac formula. The loss of this particular plant’s manufacturing capacity would have caused supply issues no matter when it happened, but it came at a very delicate moment: Nutritional formula is among the many consumer products that have been periodically scarce throughout the pandemic, leaving the market ill-equipped to deal with the sudden, extended closure of one of the country’s biggest formula plants—and, in the case of some specialty formulas, one of the country’s only plants. (A representative for Abbott did not respond to a list of specific inquiries about the plant closure, but did provide a statement arguing that the FDA had not provided conclusive evidence that its products were tainted.)

The chronic problem, though, began long before the pandemic. Parents affected by recent shocks to the nation’s formula supply were already in a delicate position, thanks to a threadbare social safety net and a history of commercial consolidation. Infant formula is a lifeline for millions of families, but the industry that creates it has shown evidence of rot for decades.

In the past, if you encountered a news story about infant formula, it was probably because people were stealing it in bulk. Law enforcement and retail organizations frequently overstate the risks posed to the general public by “shoplifting rings” and organized theft, but a thriving black market does exist for secondhand baby formula. Buying through these channels is genuinely dangerous—fudged expiration dates and improper storage can turn the product into a health hazard. That parents nonetheless resort to feeding their babies formula sourced on Craigslist or Facebook Marketplace suggests a long-standing and considerable desperation.

In a perfect world, parents wouldn’t need formula at all, because they would be able to follow the common advice to breastfeed exclusively for six months and in tandem with other appropriate foods for at least a year. But breastfeeding cannot—and never has—fully addressed the nutritional needs of every baby. Some newborns latch poorly or have allergies; some mothers find nursing physically or psychologically difficult; some babies are adopted. But one of the biggest obstacles that new American parents encounter when trying to follow breastfeeding advice is man-made: In 2021, less than a quarter of U.S. workers had any access to paid family leave through their employer, and relatively few employers offer other kinds of support for lactating mothers. “The shock of having to go back to work six weeks after delivering a new baby is terribly disruptive to breastfeeding access,” Steven Abrams, a professor of pediatrics at the University of Texas’s Dell Medical School, told me. The results of these policies show up in predictable ways in statistics about infant nutrition: The babies of richer families are more likely to be breastfed exclusively, and they are breastfed for longer on average.

For families that need to go to work and keep their kids fed, the primary safety net is maintained by private-sector food and pharmaceutical conglomerates. The Special Supplemental Nutrition Program for Women, Infants, and Children, or WIC, provides about half of all American newborns with nutritional aid through a federal program, but is administered by the states, which sign individual deals with manufacturers for the exclusive rights to provide formula to a state’s benefit recipients. This program has been very effective at getting formula to low-income families, but it also exacerbates problems within the formula market.

Because of WIC’s scale, its exclusive statewide contracts encourage consolidation, according to Brian Dittmeier, the senior director of public policy at the National WIC Association, an organization that advocates on behalf of WIC recipients and the program’s workers. Manufacturers struggle to compete in markets where they don’t have a WIC contract, even for products that are not covered by the program’s rebates. A recent analysis of retailer sales data from 2006 to 2015 found that when a manufacturer won a new WIC contract, its sales of eligible formula shot up more than 300 percent in that state. And the researchers found what they called a “spillover” effect—sales of the manufacturer’s non-rebated products also jumped significantly.

Over time, these exclusive contracts have been won by a shrinking number of ever larger manufacturers. In 2015, Abbott, the company whose plant closure triggered current shortages, held WIC contracts in 23 states. Now the number is at least 31. “There are only a few manufacturing plants in the country, and there are four infant-formula companies that control about 90 percent of the supply in the United States,” Dittmeier told me. “It’s a highly concentrated market with a highly concentrated production capacity, so that when one plant is taken offline for just a period of weeks, you see these ripple effects throughout the entire sector.”

Formula manufacturers, like any other for-profit companies, tend to do what’s best for their balance sheets. Snapping up as many exclusive statewide contracts as possible helps to muscle out competition. Running fewer, larger manufacturing plants is more cost-efficient than having more, smaller plants around the country, even if that redundancy would reduce the risk of catastrophic shortages. Extreme consolidation of the country’s infant-nutrition industry affects everyone, not just WIC recipients. “You have to consider whether there are implications to both the availability and the price of [the] product, if such a large customer base is limited to a specific brand,” Dittmeier said. According to a 2004 study from the Department of Agriculture, when a manufacturer wins an exclusive WIC contract, it raises prices on all of its products within that state.

American parents’ current plight could have been mitigated or prevented in many different ways. A host of federal policy changes could decrease demand for formula or ameliorate the market’s brittleness: Guaranteed paid parental leave—something all other rich countries provide—would make it possible for more mothers to breastfeed exclusively, if they’re so inclined. Universal prenatal care would better prepare low-income mothers to solve common problems that preclude breastfeeding. Regulators could crack down on formula marketers, who have a long history of employing tactics that a United Nations report recently described as “pervasive, misleading, and aggressive”—and of using these tactics to pursue low-income Black moms in particular. The federal government could take a more active role in ensuring that reserves of vital goods are always available, or require manufacturers that win public contracts to guarantee certain types of redundancy in their supply chains. And reforming WIC contracts to allow multiple manufacturers to supply rebated formula within a state would encourage a healthier, more stable nutritional-formula industry.

But even among people who have dedicated their professional lives to addressing the country’s infant-nutrition and family-safety-net problems, what has transpired over the past few weeks has been a shock. “I think everyone was taken aback, especially by the sudden collapse of the whole system,” Steven Abrams told me. “Nobody predicted that.”