Megan Fox Cuts Hole in Her Jumpsuit to “Have Sex” with Machine Gun Kelly, May Be Pregnant with His Baby 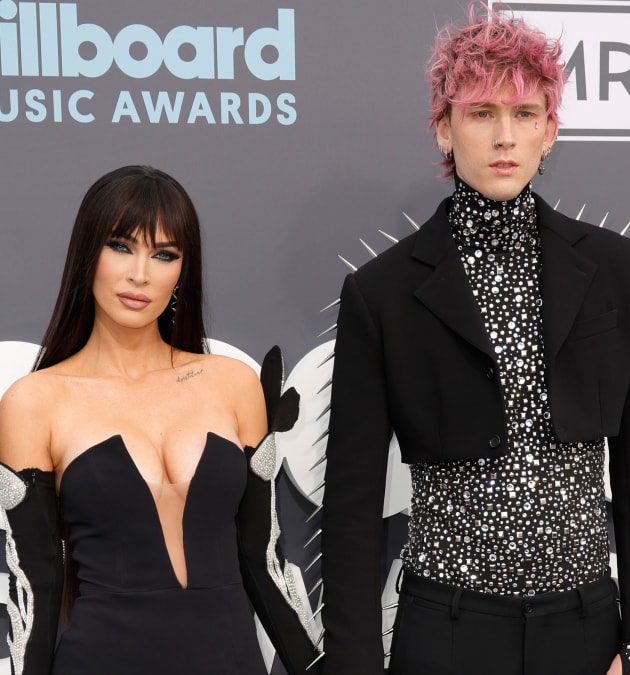 
Megan Fox and Machine Gun Kelly were front and center on Sunday night at the 2022 Billboard Music Awards.


But not really for any reasons related to, well… music.


On stage at the event, Machine Gun Kelly dedicated a performance of the track “Twin Flame” to both Fox and his future offspring, telling the crowd:


“I wrote this song for my wife… And this is for our unborn child.”


Both classifications took fans by surprise.


Fox and Kelly got engaged in January, but have they already exchanged vows?


For whatever reason, Kelly has referred Fox as his “wife” on at least one past occasion, using the term to describe his red hot lover during an appearance on The Ellen Degeneres Show.


He also told James Corden on The Late Late Show that he’s consider eloping, remarking in cryptic fashion: “I want to kind of just let … let the world see that as it comes.”


As for the pregnancy rumor that Kelly generated via this dedication?


He jumped on Twitter a few hours after the Billboard Music Awards performance and wrote that it “broke my heart to sing the end of that song,” adding by way of explanation:


“i recorded twin flame 2 years ago today, the second half came a year later. beautifully serendipitous getting to sing it for you tonight.”


This would almost imply that Fox and Kelly were expecting a baby, but tragically lost the child to a miscarriage. We’d really prefer not to speculate, however.


Fox, for her part, was in less of a reflective and/or sentimental mood on Monday morning.’


The actress instead shared an Instagram slideshow of photos and videos that featured here in a sparkly blue jumpsuit while in Las Vegas for the 2022 Billboard Music Awards.


In a screen grab of a text message thread, the gorgeous star asked her stylist:


“Was this blue outfit expensive because we just cut a hole in the crotch so we could have sex?”


In response, her stylist quipped, “I hate you” alongside three laughing emojis, prior to adding: “I’ll fix it.”


Fox and Kelly have been quite open about their physical chemistry ever since they got together in July 2020.


They often reference their sex life and this private life, admitting recently that they drink each other’s blood on the reg.


In their first joint interview as a couple, meanwhile, Fox called MGK her “twin flame,” hence the name of the track he sang on Sunday.


“I knew right away that he was what I call a twin flame,” she said at the time on the Give Them Lala … With Randall podcast.


“Instead of a soul mate, a twin flame is actually where a soul has ascended into a high enough level that it can be split into two different bodies at the same time.


“So we’re actually two halves of the same soul, I think. And I said that to him almost immediately, because I felt it right away.”