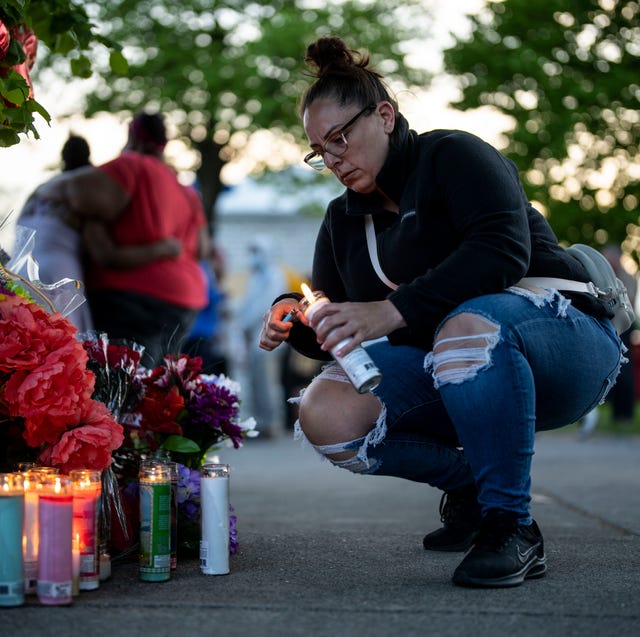 An 18-year-old gunman opened fire at a supermarket in Buffalo, New York, on Saturday, killing 10 people and injuring three more people, most of them Black, in what President Biden is calling an act of “hate-filled domestic terrorism.”

The mass shooting is one of the deadliest racially-motivated massacres in recent American history, and is being investigated as a hate crime. The suspect, who live streamed his attack, is believed to be the author of a manifesto that laid out his plans in detail and repeatedly cited something called the “great replacement” theory, a false and racist ideology that, simply put, believes there’s a secret cabal plotting to diminish white people. According to CNN, the suspect had plans to shoot more Black people at another store.

Thirteen victims, ages 20 to 86, were shot in the attack. Of those 13 people, 11 were Black and two were white. Among those killed are 55-year-old retired Buffalo Police officer Aaron Salter, Buffalo’s 86-year-old former Fire Commissioner Ruth Whitfield, and 77-year-old grandmother Pearl Young, who reportedly ran a food pantry. According to Buffalo Police, the three who survived the shooting were all taken to a local hospital. Two have since been released, and one is being treated for non-life-threatening injuries

Here’s how you can help the victims of the shooting and the surrounding community.

Family members of 86-year-old Ruth Whitfield, who was killed in the attack, attend a press conference in Buffalo after the shooting.

GoFundMe has created a hub of all the verified fundraisers that are collecting money for the families of the victims in order to help with medical and funeral expenses, as well as give cash payments.

Black Love Resists in the Rust

BLRR is an abolitionist organization of Black people and people of color working to “build safe and flourishing communities that resist the ills of white supremacist, cis-heteropatriarchal, capitalism; including policing,” per its website. The Buffalo organization posted on Instagram that its member will be providing “long-term mental health and food access support to people who are impacted” by the shooting. You can donate to those efforts here.

Colored Girls Bike Too, a Buffalo-based cycling organization that advocates for “mobility justice and liberation” in marginalized communities, is helping to collect and deliver food to people in the community. If you live in the area, you can sign up to volunteer. Otherwise you can also donate to BLRR’s fund through Cash App at $coloredgirlsbiketoo.

Every Bottom Covered is the only non-profit diaper bank serving the Buffalo community, per its website. The organization provides diapers, wipes, and other baby needs to low-income families, items that will be even more in need while the local supermarket is temporarily closed. You can donate here.

Feed Buffalo is a Black-led local organization working to provide access to locally-sourced, healthy, and halal food food for families in need. Per its Instagram, the organization will be using donations to support the communities affected by the shooting.

FeedMore WNY, which provides meal delivery services in Western New York, is helping to collect food donations at its food distribution warehouse. You can donate to the organization here.