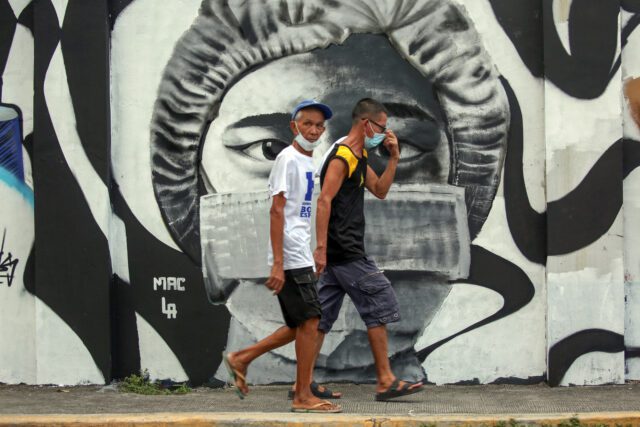 People walk past a mural in Paco, Manila, May 14. — Philippine Star/ KJ ROSALES

FOREIGN INVESTMENT pledges fell to their lowest in more than a decade in the first quarter, as sentiment was affected by another virus surge in January.

Data from the Philippine Statistics Authority (PSA) published on Tuesday showed the value of foreign commitments stood at P8.981 billion in January to March. This was the smallest haul in 13 years since the P3.959 billion pledged in the first quarter of 2009.

On an annual basis, the value of investment pledges plunged by 54.1%. This was a reversal from the 265.8% year-on-year growth in the fourth quarter of 2021 but lower than the 32.9% fall in the first quarter last year.

This was also the steepest annual contraction in five quarters or since the 67.5% drop in the fourth quarter of 2020.

“The large foreign direct investments (FDI) in 2021 to a new record high of $10.5 billion could have partly frontloaded some of the foreign investments and partly disrupted by the surge in Omicron variant cases worldwide during the early part of the quarter,” he said in a text message.

PSA data on foreign investment commitments differ from actual FDIs tracked by the Bangko Sentral ng Pilipinas for the balance of payments. The central bank’s monitoring goes beyond the projects and includes other items such as reinvested earnings and lending to Philippine units via their debt instruments.

The BoI-Bangsamoro Autonomous Region in Muslim Mindanao (BoI-BARMM) did not approve any investments for the first quarter of 2022 and 2021.

These agencies can grant tax and nontax incentives to investors putting up businesses or expanding existing ones in a priority sector.

The PEZA and BoI contributed the bulk of the total approved foreign investment pledges with P4.473 billion (49.8% share) and P4.327 billion (48.2% share), respectively.

More than half of the investment pledges or P5.15 billion would go to manufacturing projects, the PSA said. About 18% or P1.66 billion of the pledges will go to electricity, gas, steam, and air-conditioning supply pro-jects.

“The commitments for the first quarter of 2022 were mainly driven by investments from Japan, which accounted for 39.7% of the total approved foreign investments, followed by South Korea (18.5%) and Singapore (18.2%),” the PSA said.

More than half (54.2%) or P4.870 billion of foreign investment pledges in the first quarter will go to the Cavite-Laguna-Batangas-Rizal-Quezon Region, south of Manila.

Should these commitments materialize, these projects will generate 14,416 jobs, down by 38.6% from the projected additional employment of 23,462 from the previous year.