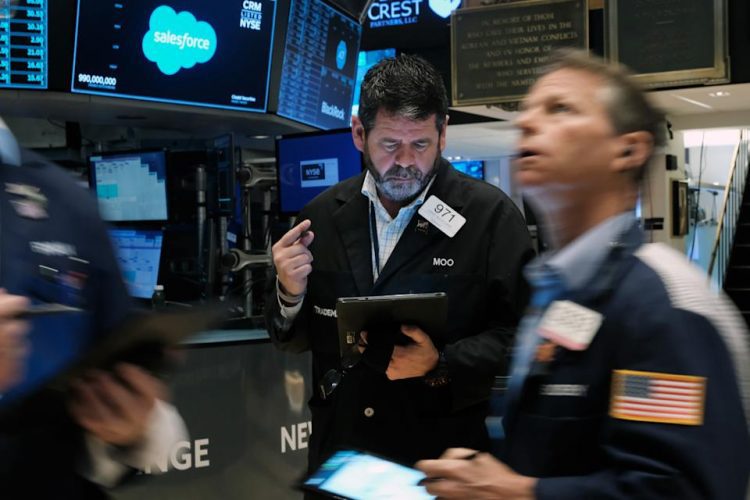 U.S. stocks sank on Wednesday after a series of disappointing quarterly results from some major retailers weighed on the broader markets. Investors also further digested remarks from Federal Reserve officials reaffirming their aims of reining in inflation.

The moves lower came as some weaker-than-expected earnings results from major retailers underscored the toll that inflation has been having on corporate profits. Target (TGT) on Wednesday cut its full-year operating income margin outlook as input and transportation costs remain elevated, and estimated it could see an additional $1 billion in transportation costs this year due to rising fuel prices. And this came after Walmart (WMT), the largest U.S. retailer, on Tuesday reported weaker-than-expected quarterly earnings and slashed its profit outlook for the year, citing higher wages, fuel and food costs. Shares of both companies sank, dragging peers including Costco (COST) and Dollar General (DG) lower in sympathy. The S&P Retail ETF (XRT) dropped more than 8%, and the S&P 500’s consumer staples and consumer discretionary sectors lagged.

“I think what investors realized was these seemingly safe haven stocks, the staples like Target, like Walmart, are not immune — that their costs are rising, they cannot pass their higher costs onto their consumers. And as Walmart said yesterday, their customers are coming in and buying groceries, but they’re not buying hard goods, they’re not buying other products where they have a slightly higher margin,” Jack Ablin, Cresset Capital chief investment officer, told Yahoo Finance Live Wednesday afternoon. “So if you look at the consumer and recognize yes wages are up, but they’re not going up at the same rate as inflation, and the highest cost increases are food and energy, that’s funneling away spending that ordinarily would be spent at a more profitable side of Walmart and a Target.”

The disappointing results outweighed optimism from earlier this week, when investors took in a number of upbeat reports on the U.S. economy. Tuesday’s at least short-lived rally came following a couple of solid reports that showed both consumer spending and manufacturing production were holding up strongly. U.S. retail sales grew at a 0.9% rate in April after a sharply upwardly revised 1.4% monthly rise in March, suggesting consumers were continuing to spend even as consumer prices have climbed at the fastest rate since the 1980s. The latest print on U.S. industrial production also exceeded estimates with a jump of 1.1% last month, or more than double the expected rise.

The still-strong economic backdrop has given the Federal Reserve more room to raise interest rates and otherwise tighten monetary policy to bring down inflation without fear of deeply disrupting growth in other areas like the labor market.

Fed Chair Powell acknowledged to the Wall Street Journal on Tuesday that while “there could be some pain involved in restoring price stability,” he believed the Fed will be able to “sustain a strong labor market.” Powell also said that there remained “broad support” for two more 50 basis point interest rate hikes at the Fed’s next policy-setting meetings, reiterating his view from the Fed’s last meeting earlier this month.

“I don’t think he said anything that caught us off guard … but let’s not forget where we are,” Ryan Detrick, LPL Financial Chief Market Strategist, told Yahoo Finance Live on Tuesday, noting that the S&P 500 has fallen for six consecutive weeks heading into this week. “It hasn’t been down seven weeks in a row for 20 years, so we’re awfully oversold here. Then you come in today and you’ve got industrial production pretty solid, you’ve got retail sales pretty solid. Things aren’t perfect, but we just think so much of the negativity that is priced in … it’s just a little overboard for us, and we think this could very well be an opportunity for some of the longer-term investors here.”

Disappointing earnings results and outlooks from big box retailers Walmart and Target weighed on the broader retail sector on Wednesday, with both companies citing increased costs due to ongoing supply-side constraints. According to one analyst, the results show investors may have been too quick to call the peak in inflation.

“It has been a wild 48 hours in retail. I think one of the things that really stood out to us was just the common patterns. We’re seeing both companies signaling that their stores are seeing stronger traffic versus e-commerce. Both companies are seeing higher costs to execute their business,” Jefferies analyst Stephanie Wissink told Yahoo Finance on Wednesday. “Consumers are reshaping their behavior, so moving more toward essentials versus discretion.”

“I think the last thing is that this is not going to abate anytime soon,” she added. “I think there were a lot of conversations among investors that maybe inflation for the consumer has peaked, but these two companies are giving us very different signals that we’re still seeing costs rising faster than prices and more pricing is to come.”

U.S. housing starts and building permits each pulled back in April, with rising interest rates and raw material shortages continuing to weigh on housing market activity.

Housing starts fell 0.2% month-on-month in April to come in at a seasonally adjusted annualized rate of 1.724 million, the Commerce Department said Wednesday. This came following a downwardly revised 2.8% drop in March. Single-family housing starts, a closely watched measure of underlying homebuilding, fell by 7.3% to come in at a rate of 1.1 million.

“Starts and permits are likely to fall sharply over the next few months, tracking the downshift in new home sales, which in turn follows the ongoing rollover in mortgage applications,” Ian Shepherdson, chief economist at Pantheon Macroeconomics, wrote in a note Wednesday morning. “Demand likely has not yet hit bottomed, allowing for the usual lag between increases in rates and the response from potential homebuyers, so we think sales and starts could easily fall through the end of the summer. Construction has run above the pace implied by the mortgage numbers for the past year-and-a-half, as homebuilders have exploited the extreme shortage of inventory in the existing home market, but this cannot last much longer.”

Comparable sales fell 4% for the first quarter, Lowe’s said, with the drop coming in steeper than the 3.25% decrease expected, according to Bloomberg data. Closely watched U.S. comparable sales alone decreased by 3.8%. However, on the bottom-line, earnings per share of $3.51 exceeded expectations.

“Our sales this quarter were in line with our expectations, excluding our outdoor seasonal categories that were impacted by unseasonably cold temperatures in April,” Lowe’s CEO Marvin Ellison said in a press statement. “Because 75% of our customer base is DIY, our Q1 sales were disproportionately impacted by the cooler spring temperatures. Now that spring has finally arrived, we are pleased with the improved sales trends we are seeing in May.”

7:32 a.m. ET: Mortgage applications fell by the most since February last week

U.S. mortgage applications slid by the most since mid-February last week as mortgage rates jumped to their highest level since 2009, deterring some refinancers and buyers from the market.

The Mortgage Bankers Association’s weekly index tracking mortgage loan application volume slid 11% week-on-week during the period ended May 13, according to the firm’s latest report. Refinances dropped by 10% from the previous week and cratered by 76% compared to the same week last year. Purchases, on a seasonally unadjusted basis, were down by 12% from the prior week and by 15% from the comparable week in 2021.

“For borrowers looking to refinance, the current level of rates continues to be a significant disincentive,” Joel Kan, MBA’s associate vice president of economic and industry forecasting, said in a press statement. “Purchase applications fell 12% last week, as prospective homebuyers have been put off by higher rates and worsening affordability conditions. Furthermore, general uncertainty about the near-term economic outlook, as well as recent stock market volatility, may be causing some households to delay their home search.”

Target posted first-quarter earnings and full-year profit guidance that disappointed Wall Street, with higher costs expecting to keep cut into the margins for the big-box retailer. Shares fell more than 20% in pre-market trading.

Target’s adjusted earnings came out to $2.19 per share for the first quarter, coming in below estimates for $3.06 apiece, according to Bloomberg data. However, like peer retail giant Walmart, sales for the quarter still exceeded estimates, with comparable same-store sales up 3.3% versus the 1.17% rise expected.

“Throughout the quarter, we faced unexpectedly high costs, driven by a number of factors, resulting in profitability that came in well below our expectations, and well below where we expect to operate over time,” Target CEO Brian Cornell said in a press statement. “Despite these near-term challenges, our team remains passionately dedicated to our guests and serving their needs, giving us continued confidence in our long-term financial algorithm, which anticipates mid-single digit revenue growth, and an operating margin rate of 8% or higher over time.” 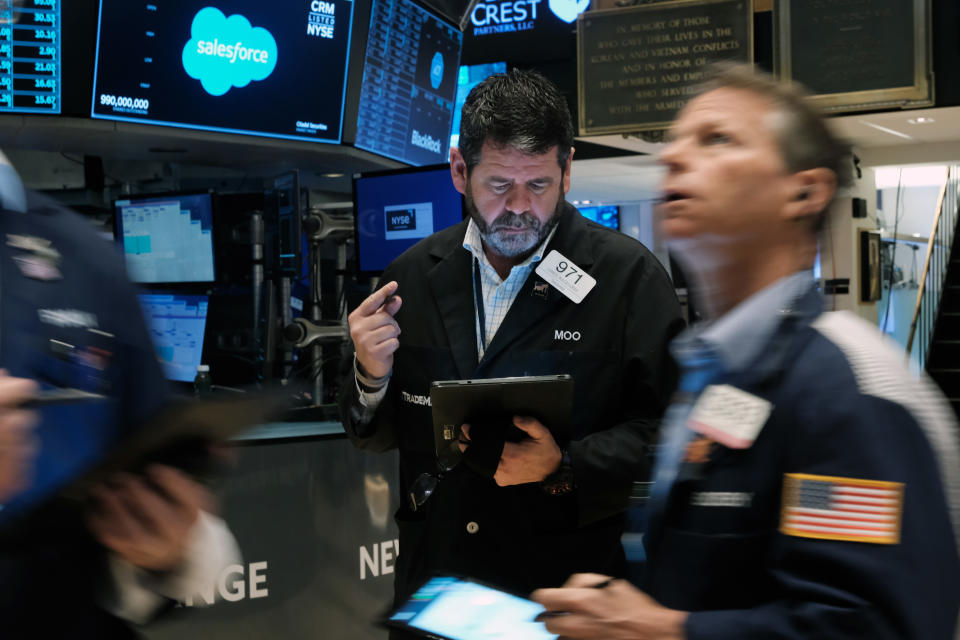 NEW YORK, NEW YORK – MAY 12: Traders work on the floor of the New York Stock Exchange (NYSE) on May 12, 2022 in New York City. The Dow Jones Industrial Average fell in morning trading as investors continue to worry about inflation and other global issues. (Photo by Spencer Platt/Getty Images)

Read the latest financial and business news from Yahoo Finance