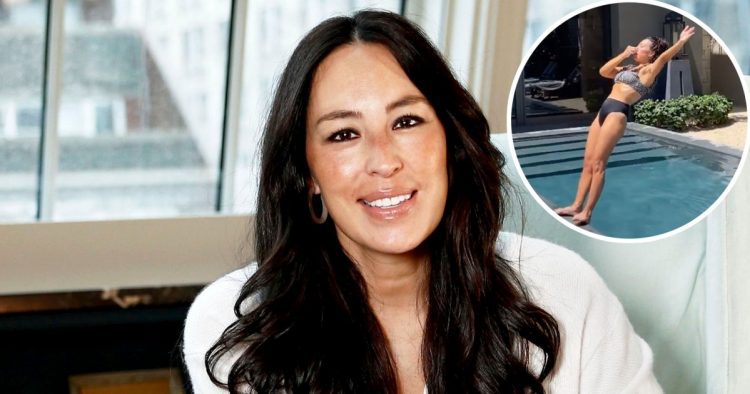 With five children she shares with husband Chip Gaines, a home decor empire and a TV network, Joanna Gaines doesn’t have much time to be sitting around the beach or pool. But the former HGTV star has showed off that she’s maintained a sizzling bikini body despite having so much on her plate.

Joanna flaunted how she’s got a fit figure and impressive abs during a 2021 Mexican getaway with Chip to celebrate the couple’s 18th wedding anniversary. She put together an Instagram video of all the fun moments the couple shared, including how she did a backward fall into the pool at their villa.

The home renovation expert wore a black and white checkered top along with high-cut black bottoms as she could be seen putting one arm in the air and using her other hand to close her nose as she fell backward with a huge splash. In another shot from the video, Joanna’s toned legs could be seen as she lounged poolside with a giant pink flamingo floatie resting on the water in front of her.

“18 years. Thankful to be on this adventure with you — happy anniversary @chipgaines,” Joanna captioned the June 1, 2021, video, which was appropriately set to James Taylor’s classic hit “Mexico.”

The couple have had such an amazing journey over that time, going from small business owners to reality TV stars and wildly successful entrepreneurs.

Chip and Joanna opened Magnolia Market and Little Shop on Bosque in 2003 in Waco, Texas. The market’s success allowed the couple to explore their passion for buying and renovating homes in the area, which led to the pair establishing their real estate firm, Magnolia Realty, in 2009.

Fame came calling in 2013 when the couple was approached by HGTV to launch their own home renovation show, with Fixer Upper becoming a smash for the network after it debuted in May of that year. The runaway success opened more doors for Chip and Joanna, including expanding Magnolia Market and taking it online, launching a magazine, Magnolia Journal, and designing a line of home furnishings and accessories that have been sold at Pier-1 and Target.

Chip and Joanna ended Fixer Upper in 2018, the same year they opened their first restaurant, Magnolia Table. Jo did a spinoff, Fixer Upper: Behind the Design, and wrote two books, one on design called Home Body and cookbook Magnolia Table. The super successful pair added TV moguls to their resumé with the January 2022 launch of The Magnolia Network, a lifestyle channel in partnership with Discovery. No wonder Joanna has so little time to be relaxing in bikinis!

Scroll down for Joanna’s bikini photos.