Why I’m Not Worried About the Stock Market Crash 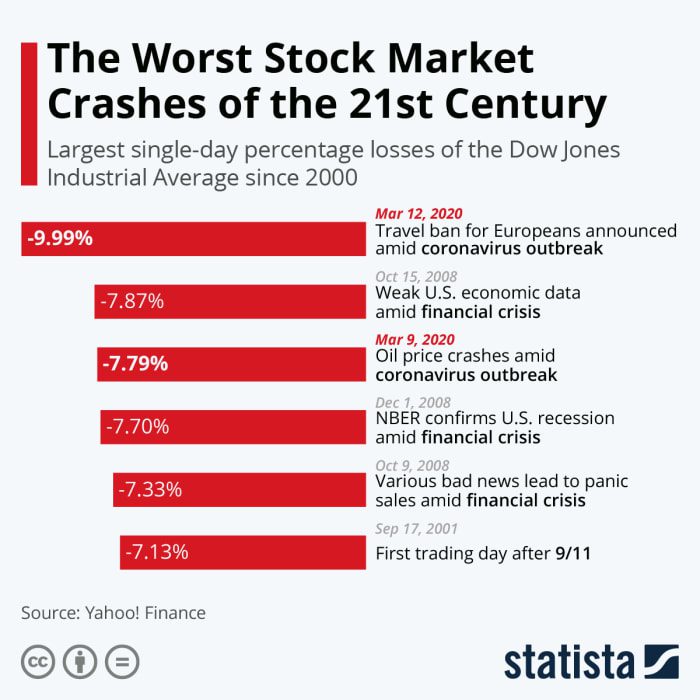 We’re not living in 1929. It’s important to remember that as we watch the stock market crash and our personal net worth take a big hit.

While that has certainly happened, it’s important to note that the stock market isn’t the economy. We’re not on the cusp of the next Great Depression. Instead, we have a market that’s spooked by rising inflation (i.e. stuff costing more) that’s also struggling with supply chain issues caused by an unparalleled global pandemic.

Yes, many things cost more including basic needs like food and shelter, as well as near-basic needs likes cars and gas. But, while inflation has been real, that’s not the full story of the U.S. economy.

We’re also living at a time where the unemployment rate (3.6%) remains near historic low (where it most likely would be if jobs weren’t so plentiful allowing some people to sit out of the labor market for a period). The labor picture has for a very rare time in American history titled in favor of workers.

This has led to jobs in the retail and service space which once paid minimum wage while offering minimal benefits to offer $15 an hour or more along with perks like free college tuition. That’s not to say that these jobs even pay a living wage (it depends a lot upon where you live) but the situation for workers in these spaces has notably improved.

The economy has its struggles, but it’s not a clear picture. High house prices for one person means a home that has gained a lot of value for someone else. And other issues — like the high cost of gas and the shortage of new as well as used cars — are tied to relatively short-term problems.

But What About My Investments?

Stock markets crash. That’s sometimes an indication of greater economic problems, but the U.S. stock market has never failed to recover its losses — often in a fairly quick period. That’s cold comfort as you see red in your portfolio, but if retirement (or whatever you plan to spend your invested money on) isn’t now or in the next year or two, a “crash” is something expected that can be used to your advantage.

The first thing you should do is evaluate why you own the shares that you own. Has something changed about any of those companies because of the pandemic? Not has the share price gone down, but has anything changed about the company’s long-term trajectory?

Short-term investors, or perhaps people who panic easily, have used Netflix’s (NFLX) – Get Netflix, Inc. Report slight subscriber drop as a sign that the company has peaked. Do you believe that or do you see the streaming leader both returning to growth and better controlling its content costs?

Netflix had explosive growth during the pandemic. Would you have rather it added those customers at a pace that spread things out for Wall Street? Do you see people leaving the service for a rival or to start reading more?

The reality is that many high-quality companies have suffered major declines for reasons that have nothing to do with their business performance. Yes, the pandemic did create some false winner that won’t be long-term successes, but that’s a small number of companies (and many long-term investors avoided those companies because of that possibility.

Now Is the Time to Buy

The stock market has become a giant Marshalls filled with name brands at huge discounts. It may seem counterintuitive to buy while stocks are crashing, but isn’t that the best time to buy? If your BMW dealer has too much inventory and offers a sale, that doesn’t change the long-term value of owning a BMW.

And while buying can be a huge opportunity, the reality is that a market crash is not the time to sell (unless you truly believe you have a holding that’s not a good long-term investment). Yes, a lot of high-fliers have fallen to earth, but that was true in 2008 as well and history has shown that holding and buying great companies when prices are low is how you get rich.