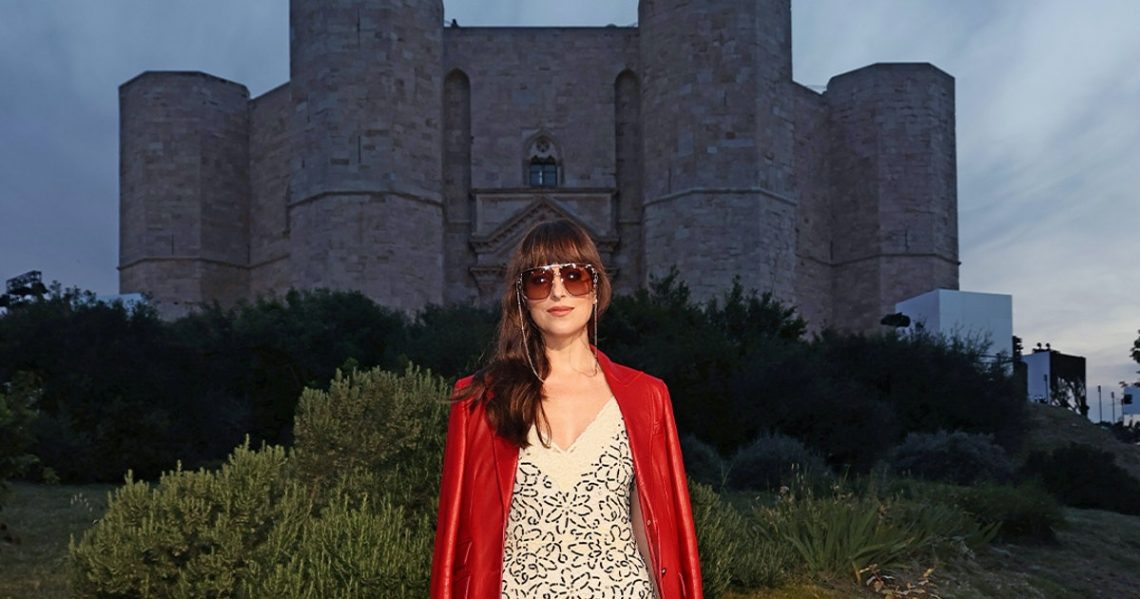 Does a Gucci event even actually occur if Dakota Johnson isn’t there to witness it? Likely, we probably won’t ever have to find out because the actress seems to be at the absolute top of Alessandro Michele’s invite list, right next to Jared Leto and Harry Styles, of course. So, when Michele debuted his latest collection for the brand in Puglia, Italy, it was no surprise Johnson was front row dressed head to toe in Michele’s designs.

The actress arrived to the event in a perfect summer dress, an off-white embroidered floral piece with a lace neckline and fringe falling along the hem. The dress is rather romantic, a slight departure for Johnson, who usually prefers edgier styles. It makes sense then, that the actress added her own touch by placing a red leather blazer on top. For accessories, Johnson chose a small black Jackie bag with a chunky chain and a pair of oversized sunglasses.

Johnson was joined at the event by Cruel Summer star Blake Lee, Thai actress Davika Hoorne, and Johnson’s The Lost Daughter costar, Paul Mezcal. Other stars, including Elle Fanning and Lana Del Rey, were also in attendance in Gucci looks as well. The show itself was classic Michele, filled with quirky looks and separates that will likely be snapped up by celebrities in the upcoming months. For every structured suit, there was a sheer dress blowing off the model. Some were covered in furs rendered in every hue possible while others were casual in jean cutoffs. Likely, Johnson spent the show picking out her next red carpet look, possible something for the premiere of her upcoming film, Cha Cha Real Smooth.