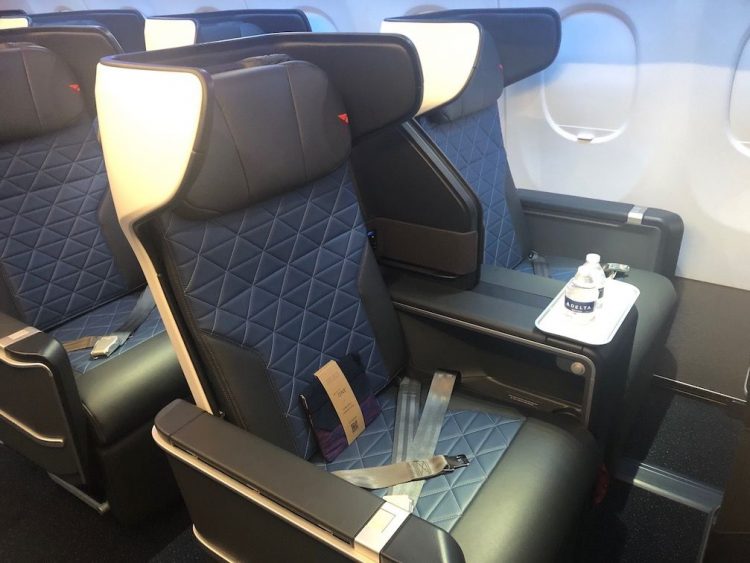 Delta Air Lines on Friday morning will launch its inaugural commercial flight of the Airbus A321neo narrowbody aircraft on a flight from Boston to San Francisco, which will feature a newly designed first-class cabin.

The new first-class cabin will feature 20 seats, complete with memory foam, that are 21 inches wide and include five inches of recline and 37 inches of pitch, according to Delta. In addition, the seat is outfitted with 10-inch screens, a fixed headrest, “wings” for more privacy, a larger and sturdier tray table with 25 percent more workspace compared with Delta’s A321ceo domestic first-class seat, three times the storage of that aircraft for electronic devices, an in-arm water-bottle storage space and large overhead bins.

Another design element is an electronic outlet panel flush with the seat as opposed to in the back of the seat in front, therefore eliminating the potential for cords to be in the way of the person in the window seat when they want to access the aisle.

“If you think about domestic first class, nothing major has been done in the United States for the past 20-plus years,” Delta VP of brand experience Mauricio Parise told BTN during a “ferry” flight that brought the aircraft from Atlanta to Boston. “We really spent time with customers starting five years ago to understand what the needs are of a five- to six-hour flight in a domestic plane.”

Delta surveyed its corporate advisory board, which meets quarterly, for input, Parise said. The company also brought both corporate and leisure customers—”but with a bias toward corporate”—to its offices to talk about their needs and to test the new seats for functionality. The three key elements travelers wanted were the ability to sleep, especially if on a redeye flight, more privacy and more and better storage, Parise said.

Delta has taken delivery of two A321neo aircraft so far and expects to have 26 by the end of 2022. The aircraft offers 20 percent better fuel efficiency over Delta’s current A321ceo planes, according to the company, which has a total of 155 ordered to be delivered through 2027. In addition to the 20 first-class seats, the aircraft’s configuration includes 42 Delta Comfort-plus seats and 132 Main cabin seats—all with memory foam cushioning and the 10-inch screens.

The next routes to be serviced by the A321neo will be Boston-Seattle beginning Aug. 11, then Boston to each San Diego and Denver starting Aug. 20, according to the company. Plans are to keep it to domestic routes, not transatlantic, Parise said.

“As the fleet grows, you’ll see this airplane with any airport with long domestic hauls—Boston, New York, Atlanta, Los Angeles, San Francisco, Minneapolis, Detroit,” Parise added. Delta also is considering adding flat beds to the product, but only on a small portion of the total fleet. “There’s no timing or routes yet, and it will be a minority of the planes, but we have plans.”