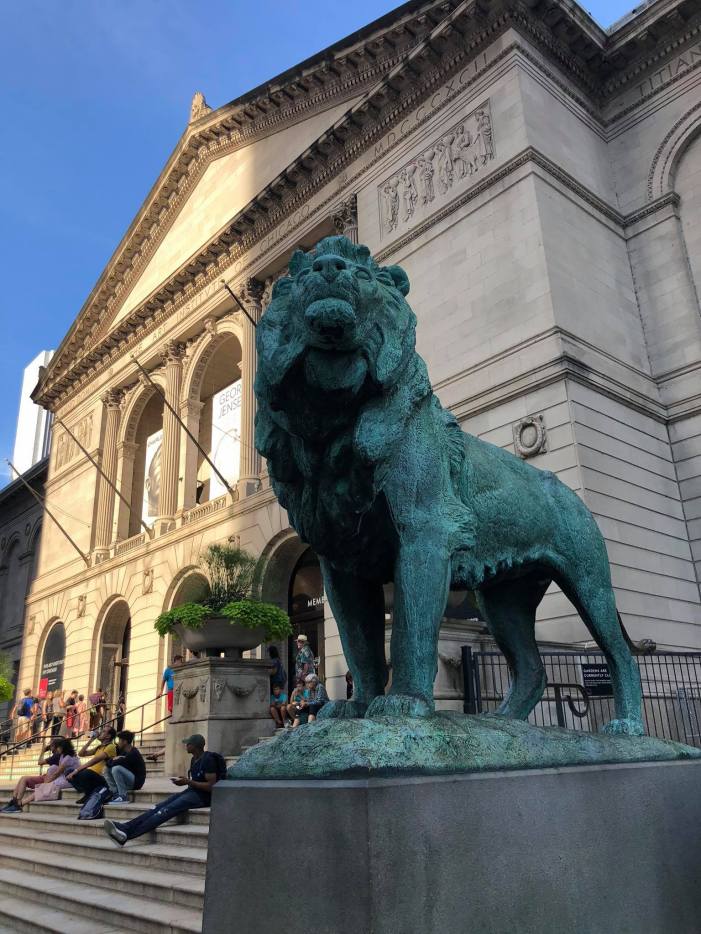 Chicago, home to a gorgeous skyline, the famous “bean”, powerhouse pro sports teams, and some of the greatest filming locations. From a plethora of 80’s classics to numerous modern TV hits, Chicago is one of the best cities to plan a weekend getaway where you can relive some of your favorite moments on screen.

Depending on which airport you fly into, you’re already in a filming location. O’Hare was featured prominently in both Home Alone films, as well as Sleepless in Seattle and Risky Business, among many others.

From the airport, head to a hotel to drop your bags. We recommend The Drake where scenes were shot for many films, the most memorable being My Best Friend’s Wedding. Another option is the Hilton Chicago where they shot Little Fockers, Road to Perdition, The Fugitive, and Home Alone 2: Lost in New York. Staying in the Conrad suite is quite pricey though.

If you’re looking for a better deal, might we suggest the Downtown location of Embassy Suites. Guests get more with every stay, including free made-to-order breakfast and drinks and snacks at the complimentary evening reception. Every room is a two-room suite and some also come stocked with in room snacks and sodas.

Now, let’s get to the filming locations, because they are a plenty!

These are the best Chicago filming locations where you can re-live your favorite movie (or TV) moments!

Visit the Gallagher house in the North Lawndale neighborhood where you can pose for pics on the porch for a small fee. Kevin and Veronica’s house is located just across the street.

Though the majority of Never Been Kissed was filmed in California, a few key scenes were shot in Chicago like Josie walking on the Wabash Avenue Bridge with her employer The Sun Times building in the background (though that building has since been replaced by Trump Tower). But the most significant Chicago location from the film is Josie’s house which is located near the L in Wrigleyville, right down the street from Wrigley Field (a location featured in many films including Ferris Bueller, A League of Their Own and Rookie of the Year).

Speaking of Ferris Bueller, his house is actually located in Long Beach. However, you can see Cameron’s House, complete with ravine out back where the Ferrari crashed to the ground in Northbrook, which is about a half hour north of the city.

You can also visit the high school where Ferris picked up Sloan, disguised as her father. While it’s called Shermer High in the film, it’s actually Glenbrook North High School. Note that that scene was shot at the steps to the Center for Performing Arts, not the main school entrance.

And, of course, if you’re willing to pay the entry fee, you too can be taken in by Seurate’s  ‘A Sunday on La Grande Jatte’ at the Art Institute of Chicago.

Just around the corner from Cameron Frye’s house you’ll find the home where Tom Cruise performed his infamous underwear dance to Bob Seger’s “Old Time Rock’n’Roll.” As previously mentioned, the Drake Hotel is also featured in the film. It’s where Cruise’s character Joel meets up with with the hooker played by Rebecca De Mornay.

Located in the Northern suburb of Winnetka, the Home Alone house looks just as it did in the film (minus the snow if you visit in Fall like I did). The kitchen, main staircase and ground-floor landing were all shot in this five-bedroom residence. All other rooms were shot on a soundstage.

The school from Sixteen Candles has been demolished but the houses are totally there and totally easy to access. You can also swing by the church where Sam’s sister got married. Jake Ryan not included.

The neighborhood spot where Vince Vaughn hangs with Jon Favreau in The Break Up is the South Loop bar The Skylark. If you’re a big fan of the flick (are there big fans of the flick?), you can also stop by the tour bus garage.

The Chicago Fire Department Engine 18 Firehouse is a working firehouse that’s used as Firehouse 51 on Chicago Fire. The interiors are shot in a studio though. For fans of Chicago PD, the Maxwell Street Police Station isn’t far away. You can find it at 943 West Maxwell Street (currently the headquarters of the University of Illinois at Chicago police department).

Bonus spot: though Lottie’s Pub has been recreated in the studio, the original bar used in season one is located at 1924 W. Cortland Street.

The University of Illinois at Chicago Police Headquarters serve as the station on Chicago P.D. Like Chicago Fire, interiors are shot in a studio.

The bridge the Blues Brothers jump near the beginning of the film is the East 95th Street Bridge over the Calumet River at Calumet Harbor, down near the Indiana border. Another still recognizable locale is the Palace Hotel Ballroom (not actually up north on Lake Wazzapamani). The exterior of the building is the South Shore Cultural Center, located on South Shore Drive at East 71st Street alongside South Shore Station. The interior wasn’t used in Blues Brothers but it was used as the charm school in A League of Their Own.

The building is located on Clark Street though it’s always shown from the corner entrance, not the entrance which your GPS will direct you. Lucious Lyon’s huge mansion is located at 45 Lakeview Lane in Barrington which is quite a ways out of the city. It’s unclear whether it’s located in a gated community or more accessible.

As in real life, John Dillinger meets his maker at the Biograph Theater in Public Enemies. It’s also where Danny loiters about in About Last Night and Rob delivers a monologue in High Fidelity. The bar where Rob goes to hear Lisa Monet’s character perform is across the street though it’s no longer recognizable.

The theater is now home to the Victory Gardens Theatre where you can watch a live production.

The minimal, semi-circular venue for the choosing is the Seventeenth Church of Christ Scientist, 55 East Upper Wacker Drive at North Wabash Avenue. This ’60s style church’s exterior can also be seen during the climactic battle in Transformers: Dark Of The Moon.

While there are quite a few fantastic Chicago filming locations on this list, there are still so many more that I have yet to visit. For example, the Suds Bucket from A League of Their Own, the town from Groundhog Day, the football field from Breakfast Club, the prison from Prison Break, the Erudite sector elliptical dome from Divergent, etc, etc, etc.

And if all that isn’t enough for you, be on the lookout for a pop-up! When we last visited there were two happening, with a third about to open. Timothy O’Tooles is home to an homage to the Chicago Bears Super Fans. AT&T was celebrating the anniversary of Friends at their store on Michigan Avenue (which we were lucky to stumble upon). And a Parks and Rec event entitled “Treat Yo Self” ran through October at the bar Replay Lincoln Park. Chicago has also been home to pop-ups featuring Beverly Hills, 90201, Saved By The Bell, Game of Thrones and more!

Want more travel and filming locations?
Check out these posts: