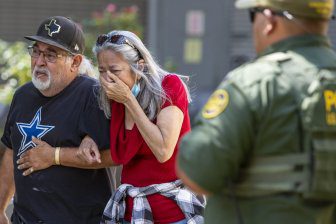 NOTE: This article contains details and descriptions that are graphic and disturbing. Please read at your own discretion.

Depp, 58, is suing Heard, 36, for libel in Fairfax County Circuit Court over a December 2018 op-ed she wrote in The Washington Post describing herself as “a public figure representing domestic abuse.” His lawyers say he was defamed by the article even though it never mentioned his name.

Depp is seeking US$50 million in damages, while Heard is countersuing her former partner for US$100 million.

Moss, a 48-year-old former supermodel — who was romantically involved with Depp from 1994 to 1998 — told the court about an incident in which she fell down a flight of stairs and was saved by Depp.


Kate Moss attends The Costume Institute Benefit celebrating the opening of In America: An Anthology of Fashion at The Metropolitan Museum of Art in New York, N.Y. on May 2, 2022.

In earlier testimony, Heard referred to Moss while she described a fight in which she admittedly punched Depp when she thought that he would push her sister down the stairs.

“Whitney’s back was to the staircase, and Johnny swings at her,” Heard said at the time. “I don’t hesitate, I don’t wait… I just, in my head, instantly think of Kate Moss and stairs. And I swung at him.”

1:04
Johnny Depp’s severed finger could not be from thrown vodka bottle, surgeon testifies

On Wednesday in very brief testimony, Moss said that she and Depp were in Jamaica during their relationship, and it had been raining. She then slipped down the wet stairs in their suite, she said, and Depp raced to help her up, carried her to her room and got her medical attention. She denied outright that Depp pushed her down the stairs and said he never did that at any point during their time together.

Following Moss, Dr. Shannon Curry returned to the stand to rebut the testimony of clinical psychologist Dr. Dawn Hughes, who said earlier in the trial that Curry presented inaccurate information about the mental state of Heard.

Curry shot back at Hughes, saying it was in fact her who drew the incorrect conclusions and test results about Heard. Curry claimed, through her test results, that Heard did not have and “never had PTSD” resulting from abuse at the hands of Depp.

Heard’s lawyer reasserted that Dr. Hughes spent upwards of 29 hours with Heard and interviewed Heard’s mother, and had a fulsome, comprehensive understanding of the actor’s mental health.

Earlier in the proceedings, which began on April 12 and will wrap up on May 27, Depp denied many of the allegations, insisting that he is a “Southern gentleman” and that he had not been addicted to alcohol or illicit drugs.

Depp may also be called back to the witness stand on Wednesday.

— This is a developing story and will be updated live