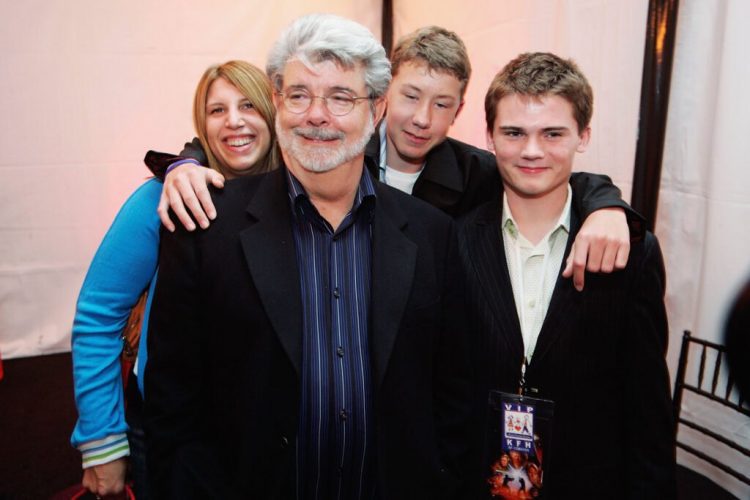 Jake Lloyd should have won the child actor lottery when he was cast as young Anakin Skywalker in Star Wars Episode I: The Phantom Menace. Since his big break, however, much of his life has been dotted with medical and financial troubles. Let’s learn what he’s up to now.

Lured by the chance to really dive into computer-generated imagery, George Lucas decided to work on a sequel trilogy in 1993. Soon a global search occurred to cast the young Anakin. Over 3000 actors auditioned for the part, with Lucasfilm landing on three. Lloyd earned the part, with Lucas loving his enthusiasm and energy. He was 10 when the film was released in 1999.

SAN FRANCISCO, CA- MAY 12: (L-R) George Lucas director of Star Wars, Amanda Lucas, Jett Lucas and Jake Lloyd attend the after party of the San Francisco World Premiere of Star Wars: Episode III Revenge of the Sith at the Loews Theaters Metreon on May 12, 2005 in San Francisco, California. The Premiere was a benefit for the Koret Family House, which provides temporary housing for families of children with cancer and other serious illnesses while being treated at UCSF Children’s Hospitial. (Photo by David Paul Morris/Getty Images)

The prequel trilogy was not well received. Upon release, the Phantom Menace broke box office records, but it was poorly received among critics and fans alike. Tons of ire was directed at Lloyd personally. While he was nominated for a Young Artist Award, he also received two Razzie nominations for Worst Supporting Actor and Worst Screen Couple with Natalie Portman.

In 2017, Mark Hamill sat down with New York Magazine where he discussed how disgusted he was with Star Wars fans over their treatment of Lloyd. “He was only 10 years old that boy and he did exactly what George wanted him to do. Believe me.” Hamill went so far as to say Lloyd’s backlash was “one of the reasons I would never let my kids be in show business. Wait until you’re 18 because it’s going to be an endless life of rejection ridicule and unemployment.”

Lloyd was bullied at school and harassed by the press, so he decided to retire from acting in 2001. In 2015, Lloyd was arrested for reckless driving after a high-speed car chase. He was held for 10 months before being transferred to a psychiatric facility.

The most recent update on Lloyd came from his family in 2020. He was living closer to his family after years in the facility. “Jake has been diagnosed with paranoid schizophrenia, but unfortunately he also has a symptom called anosognosia which causes a lack of insight into his illness.” The death of his sister Madison in 2018 did not help.

The Lloyd family wrote, “He has moved closer to his family and we are all working hard to help him with this. He is still a kind and caring person and we hope to have him back to his fun and entertaining self as soon as possible.” Here’s hoping he can find his way back to safety and stability in time. No one deserves the level of hatred he had to weather at such a young age.

What Happened To The Cast Of ‘Night Of The Comet’?

Where Is The Cast Of ‘The Last Starfighter’ Today?