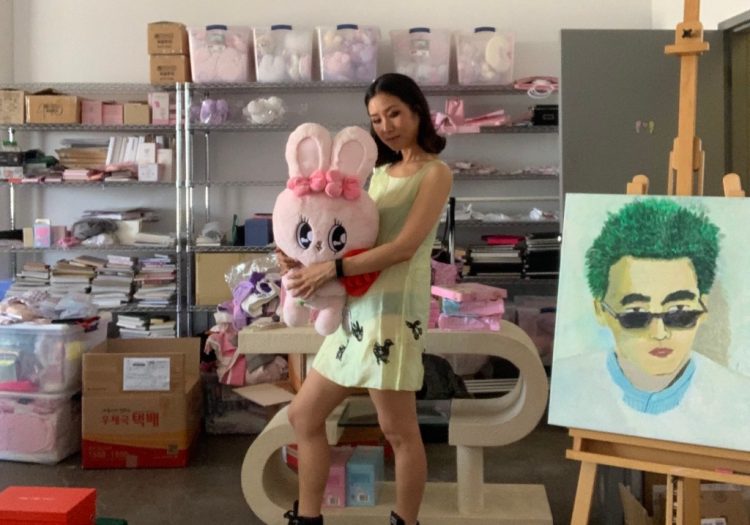 You may have seen a certain bunny character going through the waves of experiencing breakouts on our Instagram — her name is Esther Bunny, and she gets it. The mastermind behind the comic is none other than Esther Kim, a Korean-American artist whose work merges cuteness with the all-too-real feelings we experience on a day to day.

We collaborated with her to create one of Esther’s signature Esther Bunny Comics about skin acceptance and acne neutrality for Mental Health Awareness Month. To shed more light on this effort, we asked Esther to share more about her inspiration behind Esther Bunny and want she wants her followers to know.

Editor’s note: Responses have been lightly edited for clarity.

As the creator of Esther Bunny, who is she to you? Who do you want her to be for other people?

Esther Bunny is a way for me to communicate my emotions and encourage people. I draw Esther Bunny Comics to process the lessons I learn in my daily life. She is also a form of soft power and a way to combine the complexities of my multicultural background.

I liked the idea of becoming a part of culture through cuteness and commerce, from when I was a young girl buying Keroppi pencils and going to Morning Glory at the Korean malls and shops in Los Angeles and New York City, to living in Tokyo as a Korean-American, to now working with companies in Asia. [Growing up,] I felt the power of cute things when I went to class — where I was one of the handful of Asians in my school. People were curious about my cute mechanical pencils.

You can look at Esther Bunny at surface level as just cute, or you can go deeper with it as an entry point into Asian culture — or something you see a reflection of yourself in. I find that my fans in the U.S. are often into art, Korean pop culture, Kawaii culture, and fashion. It’s always been interesting to see how people in other countries respond and identify with Esther Bunny. I’m always inspired and touched that people identify with her, and it keeps me going to share my struggles and encourage people.

How has your Korean heritage inspired your work? Where else do you find inspiration?

I’m Korean-American, a child of immigrants, and also a third-culture kid — which is what happens when as a child you move to another culture that is neither your parents nor your own, and you create a third culture. My parents moved our family to Japan when I was in sixth grade, which was a complete culture shock.

I’ve always felt like an outsider within a more dominant culture, whether I’m around Americans, Asian-Americans, Japanese, or Koreans. I think the loneliness of never feeling like I had a place of my own led me toward a creative life. I wanted to create a world and life of my own. I’m inspired by my emotions, failures, expression, growth, goals, self-love, fashion, art, criterion films, ‘90s supermodels, ‘60s French actresses, Los Angeles, Tokyo, Paris, and Seoul.

What has your relationship to your skin been throughout your life, and how do you approach your skin now?

Everyone in my family has nice skin: unblemished, no pimples, barely any maintenance if any at all. I’m the only one that had a lot of acne and subsequently acne scars. My parents didn’t really know how to take care of my skin properly and didn’t think it was a big deal, so starting in high school I wore a lot of foundation. I always tried to cover my acne instead of trying to take care of the skin underneath.

It’s been a long journey to where I am now, but I have learned that what I eat affects my skin, not to be embarrassed of going outside with a bare face, and to enjoy the process of massaging in my serums, doing my gua sha and neck stretches, and know that it’s better to do it imperfectly than not at all.

When and how did you learn to take care of your skin?

I had acne in middle school and high school, but my mom was one of those people who are just born with amazing skin and literally does nothing — yes, those people do exist — so she didn’t pass down any Korean beauty knowledge. Then, when I came to the U.S. for college I started eating a lot of cheese, fried foods, and fast foods, and I got cystic acne all over my skin. I did not make any connection between acne and food, and I didn’t know how to take care of it.

It wasn’t until I stayed with a friend in Korea for a couple of weeks that I got to see the double-cleansing, the daily face mask, the clean eating, the oil cleansing that they would do for such a long time to melt off the dirt and grime, the mists they would carry around, and the vigilance with sun protection. I was blown away. This was before the K-beauty wave. I only had seen articles in magazines that had very general articles saying things like “don’t over-wash your face,” but taking that advice, I was probably under-washing my face. My Korean friends lived and breathed skincare, and I wouldn’t have known unless I saw it firsthand.

Even after getting that knowledge skincare has always been intimidating to me. Now I feel like you need a PhD to understand all the different serums and treatments, but I have a system that works for me. Toner, serum, and moisturizer are non-negotiables, and I love those waxy balm cleansers that melt into an oil. I find it really relaxing to wash my face with that. Right now I’m using all Glow Recipe and I love all the formulations, especially the serums.

What is the best skincare tip that you’ve learned?

Double-cleansing with a balm to remove makeup and then a water-based cleanser did wonders for my skin, and serums were a game-changer for me. I still don’t quite understand what they do, but they really moisturize my skin beyond the surface.

How do you take time for self-care?

I have a wind-down ritual at night. I always shower, do my skincare, and stretch. It could be up to an hour of my time but it really calms me down and keeps the work and existential worries at bay. It also signals to my brain to calm down because I need to sleep soon.