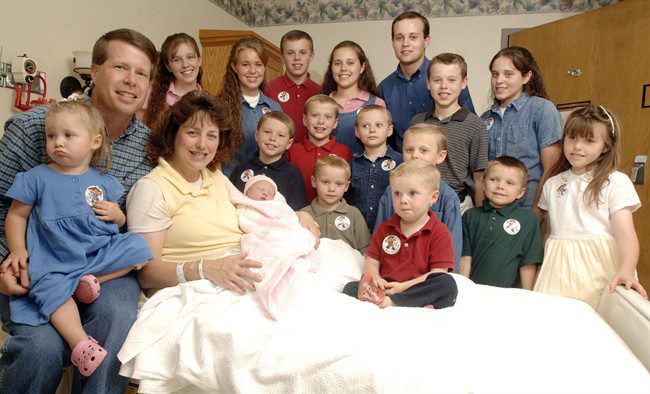 Former reality TV star Josh Duggar returned to federal court on Wednesday, where a judge sentenced him to 12.5 years in prison for a child pornography conviction.

Judge Timothy L. Brooks sentenced Duggar to a total of 151 months behind bars.

Prosecutors were seeking a maximum 20-year sentence for Duggar, while his lawyers asked that he be sent to prison for five years.

According to People magazine, Duggar’s father, Jim Bob, and wife, Anna, sat in the court’s front row as his sentencing was handed down.

According to the publication, when he wasn’t taking notes on Wednesday Duggar often turned and smiled at his wife.

Duggar, whose large family was the focus of TLC’s reality show 19 Kids and Counting, was convicted of downloading and possessing child pornography in December of last year. (On Wednesday, one count of his December conviction was dropped, and Duggar was sentenced on one charge of knowingly receiving child pornography.)

TLC cancelled 19 Kids and Counting in 2015 following revelations that he had molested four of his sisters and a babysitter. Authorities began investigating the abuse in 2006 after receiving a tip from a family friend.

However, they concluded that the statute of limitations on any possible charges had expired.

FILE — In this Aug. 2, 2007 file photo, Michelle Duggar, left, poses with her husband Jim Bob, second from left, and children, including their oldest son Josh, tallest standing, after the birth of her 17th child in Rogers, Ark.

Duggar’s parents said he had confessed to the fondling and apologized. At the time, Duggar apologized publicly for unspecified behaviour and resigned as a lobbyist for the Family Research Council, a conservative Christian group.

Duggar later apologized for a pornography addiction and for cheating on his wife, calling himself “the biggest hypocrite ever.”

Duggar’s lawyer argued that someone else downloaded or uploaded the images onto Duggar’s computer. But the jury wasn’t swayed.

Duggar’s father Jim Bob, who also starred on the reality show, is running in a special election for a vacant state Senate seat in northwestern Arkansas, and the primary election in that race is Tuesday. He previously served in the Arkansas House.

Duggar maintains his innocence and has said he will appeal.