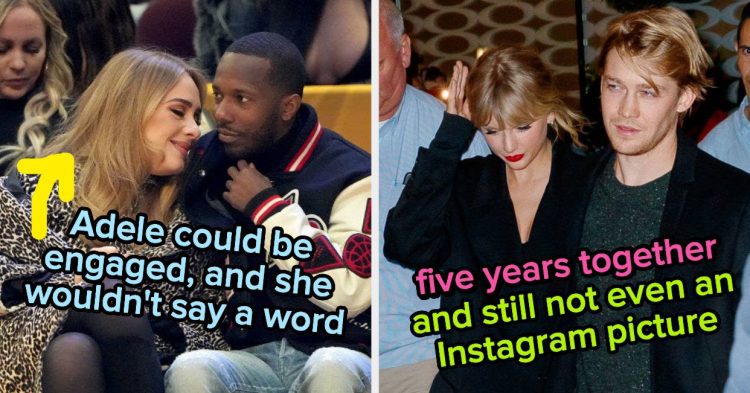 I feel like I see Kim and Pete everywhere EXCEPT the red carpet.

Others, however, prefer to keep their relationships more low-key — or at least, off the red carpet.

Florence Pugh and Zach Braff have been dating since 2019.

They’ve faced a lot of public criticism for their 21-year age difference, but, addressing the hate on Instagram, Florence said, “I do not need you to tell me who I should and should not love.”

Taylor Swift and Joe Alwyn have been together since 2017.

Taylor told Rolling Stone, “I think that in knowing him and being in the relationship I am in now, I have definitely made decisions that have made my life feel more like a real life and less like just a storyline to be commented on in tabloids.”

They kept their union a secret until JVN revealed the big news in an end-of-year recap on Instagram.

In response to engagement rumors, Adele told The Graham Norton Show, “If I was [engaged], would I ever tell anyone if I was or wasn’t?”

Around the same time, Jennifer began a two-year hiatus from the spotlight. In her comeback interview with Vanity Fair, she said, “I just think everybody had gotten sick of me. I’d gotten sick of me…It had just gotten to a point where I couldn’t do anything right. If I walked a red carpet, it was, ‘Why didn’t she run?’”

John Mulaney and Olivia Munn have been in a relationship since 2021.

Addressing the rumors regarding their relationship, Olivia told the LA Times, “If I try to say anything, I run the risk of being called messy or not telling the truth. The only way to win, for me, is to pull back and to not play the game at all…I’d rather close the door to that and just take care of myself and my baby.”

When Vogue asked Olivia if she’d like to comment on their relationship, she said, “It’s obviously really tempting to correct a false narrative…But I think what you realize is that when you’re really happy, it doesn’t matter what strangers think about you. All that matters to you is what’s real, and what you love, and who you love.”

Revealing their relationship on Instagram after their first anniversary, Stacy said, “It’s really easy for me, a privileged white woman who is 50, to suddenly say, ‘I’m dating a woman’ with very few repercussions, and I am well aware of that. Unlike me, there are countless people in the LGBTQIAP community who have had no choice in who they are, no love from family on which to lean, no support from anyone anywhere… I stand on the shoulders of a community that fought like hell for me to be able to do that openly and proudly and EASILY.”

Darius is a fitness trainer. Back in 2020, Keke told Harper’s Bazaar that she prefers to date non-celebrities. She said, “I’ve always had the same philosophy when it comes to dating…trying to keep my private life outside of my work life, to me, it’s easiest when you don’t date someone with the same career.”

Robert Pattinson and Suki Waterhouse have been together since 2018.

In 2021, Suki called out Gossip Girl for making a joke about their relationship and calling her “Suki Nobody.” On Twitter, she said, “Seeing critiques of the patriarchy and sexism, then I get name-checked as somebody’s nobody girlfriend. Make it make sense.”

A few months prior, Rachel shared another picture with him on Instagram and joked that she was “spending Christmas Eve with a man [she has] never met before.”

Rachel McAdams and Jamie Linden have been in a long-term relationship since 2016.

They kept their first pregnancy a secret until Rachel confirmed the birth of their first child to the Sunday Times in 2018.

Noelle costars Anna Kendrick and Bill Hader have reportedly been together for over a year.

A source told People that the pandemic made it easier for the private couple to keep their relationship underwraps.

Kal Penn announced his engagement to Josh, his partner of 11 years, in 2021.

Kal first publicly addressed their relationship in his memoir You Can’t Be Serious. He told BuzzFeed Daily, “I wanted to be respectful of his privacy…And the fact is that he, like my parents and my brother, really doesn’t love the limelight.”

Jason Sudeikis and Keeley Hazell have been romantically linked since 2021.

Keeley guest-starred on Jason’s hit show Ted Lasso. She was also the inspiration for the character Keeley Jones.

After 18 months together, Miles Heizer and Connor Jessup went Instagram official in 2020.

Connor credited their relationship with inspiring his decision to come out publicly. He told Attitude, “When you’re happy, you want to be happy publicly, and it made me think about the whole construction of my life in a way that I had been avoiding…I probably wouldn’t have [come out] if that hadn’t happened.”

To celebrate Alejandra’s birthday in 2021, Sebastian posted a sweet and silly short film about their relationship.

Liam Hemsworth and Gabriella Brooks have been romantically linked since 2019.

They made their first social media appearance together in an Instagram post that Liam’s brother Chris made from their other brother Luke’s 40th birthday party.

Kat Dennings and Andrew W.K. got engaged in 2021 — only a week after going public with their relationship.

They spontaneously proposed to each other at the same time.

Ana de Armas and Paul Boukadakis have been romantically linked since 2021.

Paul is an executive at Tinder.

Kendall Jenner and Devin Booker have been together since 2020.

Devin told WSJ Magazine that having the spotlight on both his professional and private lives isn’t hard. He said, “I’m enjoying life to the fullest, and that came off my tongue so easily because it wasn’t always this way, but I feel like I’m in a good place right now.”

And finally, Kim Kardashian and Pete Davidson started dating in 2021.

Which celeb couples do you think will make their red carpet debuts in 2022? Let me know in the comments!