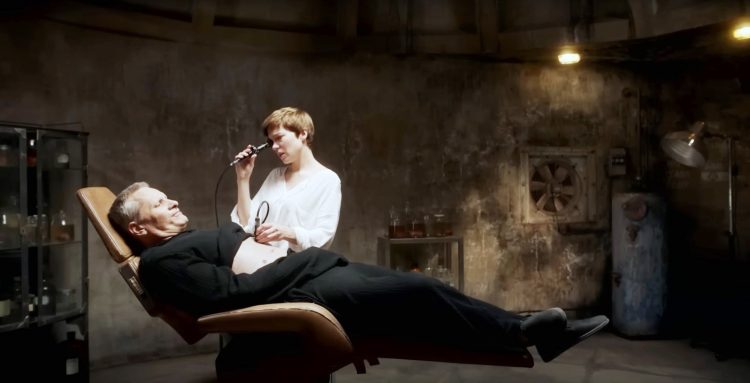 David Cronenberg and Viggo Mortensen first met at the Cannes Film Festival in 2001 at a promotional party for Lord of the Rings, in which Mortensen starred as Aragorn. It was a chance encounter that would lead to a two-decade collaboration spanning four films— but Mortensen doesn’t really remember it. “I was probably having a good time,” he says with a twinkle in his eye when I sit down with the actor and director in Cannes the day after the world premiere of their latest film together, Crimes of the Future.

Their collaboration began in earnest when they worked together on A History of Violence, a 2005 film in which Mortensen played a man who defends his small-town diner against thieves. They reunited for 2007’s Eastern Promises and 2011’s A Dangerous Method, and now Crimes of the Future, in which Mortensen plays Saul, a performance artist who has his organs removed by his partner (Lea Sedeoux) in front of audiences. The film is set in the future, when people’s bodies have begun changing in dangerous ways and technology — and a world without pain — allows them to perform surgery on themselves.

When together, the 79-year-old director and the 63-year-old actor have an easy rapport, full of witty comebacks and thoughtful reflections on their collaboration. They spoke to me about why Mortensen was apprehensive about playing Saul, how they’ve each changed over the years and what might come next.

Crimes of the Future

After four films and all these years, why does this partnership work so well?

Cronenberg: We keep trying, we think maybe this time we’ll get it right.

Mortensen: This has got to be the worst experience.

Cronenberg: Worst experience in our lives. [Laughs.] We don’t want to waste your time but we do need to keep it light.

That’s understandable. So tell me, once you realized you wanted Viggo to star, what’s the first thing you told him about this project?

Cronenberg: The first thing was that Viggo didn’t want to play the lead role. He wanted to play the cop because I think he felt more comfortable with that role, knew what it was. Whereas the lead role — this is just me imagining, we haven’t really discussed it — is odd, complex, kind of passive, reactive.

Cronenberg: And maybe a little trickier to play. So naturally that made Viggo afraid because he’s such a wimp.

Motensen: I actually thought of it as, I said it to you, and I read it and thought this is a great film of our story, I’d like to be sort of the bad guy. The guy who’s running the sting operation. But then no, David said, “no, you should play the lead.”

Cronenberg: I harassed him. I berated him. I phoned him and texted him. Harangued him until he finally agreed to play the lead instead.

Mortensen: In the end I liked that as an acting exercise because the foundation of good acting really is good reacting. And this character is reacting to what is happening to his body, to his environment, to what his partner is doing — what they are doing together to his body. I also like there’s layers to the character that have to do with a very artistic thing, a human thing. He has an ego. He has vanity. He’s jealous of other artists to some degree. There’s many layers to him. I found that interesting. But it’s true that he’s reacting much more than most characters I play, and any that I’ve played. Even Sigmund Freud [in A Dangerous Method], he’s aggressive in his intellectual way and defensive. And Saul is not — he’s actually quite a loving, vulnerable person.