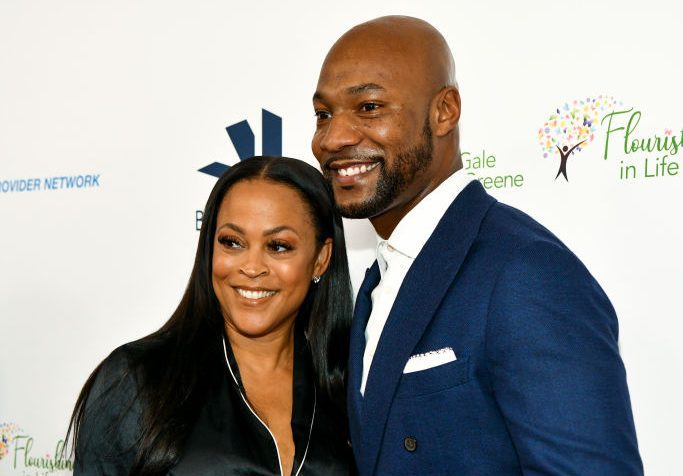 Congratulations are in order for Shaunie O’Neal and Pastor Keion Henderson!!

The happy couple tied the knot in paradise, Saturday at the Aurora Anguilla Resort and Golf Club. The beautiful ceremony took place outdoors on the golf course’s 10th hole. As the lovely bride entered gospel vocalist, Yolanda Adams performed. Walking the bride down the aisle to meet her now-husband were her three sons, Shareef, Myles and Shaqir.

“I just lost my dad in February,” O’Neal tells PEOPLE. “So, I really struggled with how I was going to get down the aisle. Losing my dad in the midst of planning this wedding was a lot, so my sons handed me off.”

Her other children whom she co-parents with ex-husband, Shaquille O’Neal, were also in attendance and brought comfort, love and light to Shaunie’s big day.

The Basketball Wives star graced the wedding aisle wearing a sparkling gown by Jean Louis Sabajai in partnership with fashion stylist Eric Archibald, paired with an angelic veil also from the designer. Jewelry was provided by David Yurman and shoes by Jimmy Choo.

Her fiancé, Pastor Henderson, stood proudly at the alter in a cream tux by Dolce and Gabbana, while the groomsmen were clad in Atelier Houston. Officiating the nuptials were good friend and mentor towards the couple, Bishop TD Jakes.

The pair fell in love with the venue on the first visit and knew right away this was the place were they wanted to begin their happily ever after.

“I think after that first visit, we knew this was the place we wanted to get married,” O’Neal, 47, tells PEOPLE. For Henderson, 41, Anguilla’s rich history and welcoming residents made them “proud to connect to” the island and “start their journey” there.

Nearly 200 guests were in attendance at the Anguilla wedding and they spent the evening dancing to music from the Isley Brothers while Spinderella kept the tunes coming late into the night at the afterparty. Shaunie actually admitted she originally planned for only 50 guests. “We wanted our guests to have a weekend of enjoyment,” O’Neal says. “We just like to have fun and love on each other and we wanted to do that with our friends and family.”

Before tying the knot, the couple dated for two years and announced their engagement last November. The couple said their chemistry and connection was undeniable from their first date.

“I was in California getting ready to preach. … She finally agreed to meet me,” Henderson tells PEOPLE. O’Neal had been out to dinner with a friend earlier that evening and told her future husband she’d go out with him “if she had time after eating.”

Shaunie happily said Henderson fit right in with her family long before the “I dos.” “He’s been amazing to just step into our lives and fill a void that’s been there for a minute in a space of just being here with me, cause I haven’t had somebody,” she says. “They love him which makes me love him even more.”

Henderson had the same sentiments saying, “She’s amazing. She’s just the most laid-back, hilarious, fun-loving person. She’s a woman of faith, she can cook, she can dress, and she can sing!”

The couple hopes to move forward together by building a legacy while continuing to grow, evolve and become who they are called to be!

Congratulations again to the lovely couple and we wish them much success!