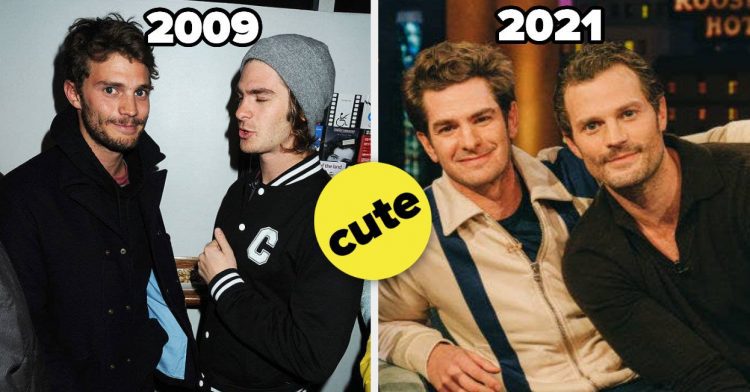 Matthew McConaughey and Guy Fieri bonding over Triple D is an amazing thing.

Jack and Alexander have been best friends for years — Alexander brought Jack as his plus one to the Golden Globes, where he won an award for his role in Big Little Lies.

James and Dominic used to live with each other when they both first moved to LA and have remained friends ever since.

Kevin and Dwayne met on the set of Jumanji and have remained friends — and starred in several films together — ever since.

Leonardo and Tobey’s friendship goes back a couple of decades — the pair of them, as well as Kevin Connolly, Lukas Haas, Harmony Korine, Ethan Suplee, and David Blaine, made up the “Pussy Posse.”

Eminem and Elton’s friendship started at the 2001 Grammys, when the two performed on stage together — which was particularly important because GLAAD was protesting Eminem’s presence at the Grammys and Elton is an openly gay man. When Eminem started his road to sobriety, Elton volunteered to be his sponsor.

Matthew and Guy’s friendship stems from Matthew’s love of Diners, Drive-Ins, and Dives. While traveling across America in a trailer, Matthew would call Guy for food recommendations in different cities before meeting IRL and cementing their close friendship.

Who was the most surprising bromance on the list? Who’s your fave bromance that we didn’t mention? Sound off in the comments below!