Jean Smart is having a moment. Certainly, she’s had several during the four decades of her career so far. But in this current era, the winds of social media have elevated her to a new height of fame. Every week, tweets about her on-screen chemistry with her screen partner, her ability to switch from tranquil to scarily choleric on a dime, and her wry displays of talk show humor flood the feed. Such idolatry is not something she could have foreseen during her days on Designing Women—the CBS series she considers a game changer and that made her a household name. But it lines up perfectly with her portrayal of Deborah Vance, the wisecracking, capricious, and—let’s be honest—mean queen of comedy on HBO Max’s Hacks, now in its second season. The part has been especially fruitful, not only for Smart—“I really felt like they were handing me a gift-wrapped package, and it was a thrill,” she says of the role—but also for fans who have had a field day with creating memes and content around her character, all of which the actress engages with slightly, seemingly from a distance.

On a phone call shortly after the Hacks season two premiere, Smart is very matter-of-fact about her path to success. She’s been acting for so long that, “everything feels gradual,” she says. It’s apparent that the actor, now 70, knows better than to indulge in others’ opinions of her, good or bad, especially on the Internet. She, herself, isn’t on Twitter, instead keeping her fans satiated by simply doing her job. Throughout the ’80s, ’90s, and well into the aughts, she was a popular presence on television as Designing Women’s big-hearted Charlene, Christina Applegate’s dysfunctional mom on Samantha Who?, and Frasier’s Lana Gardner, Frasier and Niles Crane’s former classmate and crush. The latter would lead her to back-to-back Emmy wins in 2000 and 2001 and at the mere mention of the hit comedy, she lights up on the other end of the phone. “One of my all-time favorite roles!” she says. “Back then, it wasn’t considered really cool to do a guest part.” Would she ever appear in a reboot of the series? “In a heartbeat! Even if it was just one episode.”

Her more recent turns in the prestige hits Fargo, Watchmen, Mare of Easttown and Hacks—for which she won her fourth Emmy and is favored to win again this year—would prompt declarations of a Jean “Smartaissance.” When really, she’s been here, consistently booked and receiving critical acclaim all along. If others want to prop her up for specific roles, that’s their prerogative. For her, they all feel like equally important moments during an incremental progression toward success.

It all began in Seattle, where Smart says she had quite a normal childhood. “My family would say that I was the family ham—and I was,” she tells me. “I didn’t know anybody who was an actor.” The realization that she wanted to act came while attending performances at the Seattle Repertory Theatre as a teenager. “I remember thinking, I wanna be up there,” she says. After graduating from the University of Washington, she’d go on to cut her teeth in the Pacific Northwest and New York theater circuit where, much like her future on-screen work, she excelled in both drama and comedy. Standup, however, was territory she didn’t venture into until Hacks came along. “I always thought it would be fun,” Smart says. “But I always also thought it would be beyond terrifying to actually do it in real life. So to get to do it, but without any of the risk, is just so cool.”

Jean wears The Row coat; Assael earrings; her own ring.

Smart’s big Hollywood break came in 1982 when she landed a series with Lynn Redgrave called Teachers Only, and although the show was short-lived, the work kept coming. In the years since, she’s taken on everything from the First Lady in 24 to voicing Kim Possible’s mother in the animated Disney series. Her guiding principle for choosing projects has never been in line with what’s popular or expected. Smart’s roles have always been wildly varied, but if there is one thread between them it’s possibly the fact that they all fall under the “complicated mother” umbrella. For Smart, that may just be a coincidence: “At a certain age, most of the parts you’re offered are gonna be somebody’s mother, you know? So sometimes you have to consciously steer away from that,” she says. “You don’t want to always just be the maternal figure. Even with my character in Fargo, she’s not mother of the year,” she says with a laugh. “Although, I thought she was a very supportive mother.”

When it came to playing the complicated mother figure of Deborah Vance on Hacks, however, Smart had zero hesitations. “If I could have made a list of some of the qualities I would want in my next job, it ticked off every box,” she says. Deborah, who specializes in insult comedy and hawks her cheap wares on a home shopping channel in her spare time, is partly inspired by the female comics who might not have been given the same recognition as some of their male counterparts when they were in their prime—Joan Rivers, Phyllis Diller, and Elaine May, to name a few.

The first season of the series created by Lucia Aniello, Paul W. Downs, and Jen Statsky was a runaway success owed mostly to Deborah’s love-hate relationship with the Gen Z-Millennial-cusp comedian Ava (Hannah Einbinder) who is hired to punch up her jokes. Season two sees the duo, with Deborah’s entourage, traveling across the United States from Nevada to Tennessee. Along the way, Deborah realizes that by putting her career first, she may have stepped on a few women who could have been her allies, but whom she saw as competition. She’s also faced with constant reminders that she has neglected to fully take care of her now-adult daughter, DJ (Kaitlin Olson). As annoying as Ava may be, there is both a surrogate parent-child relationship between the two, and a reconciliation for Deborah’s poor behavior toward other women comics in the past. “Deborah is not the most enlightened feminist in the world, that’s for sure,” Smart says. “I think political correctness, for the most part, she finds incredibly annoying because she treats everybody at face value. Which is kind of the way it should be—but we are also caught in the nuances of things and need to inspect our relationships more. It’s very obvious now that there are factions in our society who want to go back to the ‘good old days,’ which weren’t so good for a lot of people. When they say the ‘good old days’ they mean for white men, mostly. But Deborah is still learning.”

That hilarious and devastating dynamic between Deborah and Ava keeps viewers on their toes and is rich for meme-making: just as it is revealed early in the second season that after Ava accidentally violated her non-disclosure agreement, Deborah has decided not to fire her—but to sue her, it is also clear that Deborah just wants to “dangle Ava on a string and torture her,” Smart says, as a way of keeping her close. It’s a twisted form of mentorship, sure, but not nearly as warped as the ones we’ve seen on some other HBO comedies.

While Deborah may be in the hall of fame of beloved roles played by Smart, the character’s approach to parenthood couldn’t be more different from the actor’s real-life relationship to her children. While filming Mare of Easttown with Kate Winslet in Philadelphia, she says she would fly home to Los Angeles multiple times each week to see her 14-year-old son who she adopted in 2009. (Smart has an elder son who is 32). Part of the draw of taking the job on Hacks was that she wouldn’t have to travel much at all, leaving her to time to spend with her late husband, Richard Gilliland, before he passed in 2021. “I’m pretty much just Mom at home, and if I’m out of town, I try to get home and make all the school lunches for the week,” she says casually. It’s not something you might expect to hear from an actress whom just about everyone agrees is a Hollywood legend—but then again, she’s made a career out of giving audiences something unexpected. 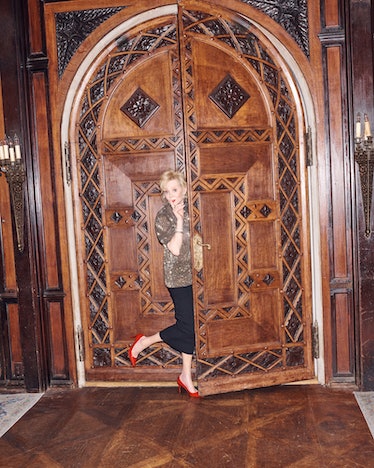 These days, Smart is gearing up for the release of Damien Chazelle’s upcoming Classic Hollywood period drama, Babylon, starring Brad Pitt, Margot Robbie, and Tobey Maguire. In it, Smart plays a character based on Elinor Glyn, the British writer who coined the term “It girl” in the early 1900s. “She’s the one who turned Clara Bow into a movie star,” Smart says. “She came to Hollywood and she had some screenplays done, and she was also a Hollywood columnist who could make or break your career.”

She’s also begun writing and producing in earnest, developing a couple of projects she can’t talk about just yet. But performing will always be her number one love. “Acting is what I love to do, and people keep offering me jobs, so it seems like it would be silly to say no,” she says with a laugh. “I try to be choosy about what I do, and I know how incredibly fortunate I am to be able to be choosy; that is not a given for most actors. It’s been a really satisfying, fun, interesting way to make a living—and hopefully it hasn’t damaged my children too much.” 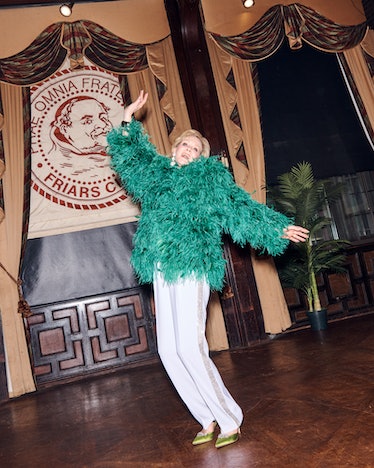 Hair by Marco Santini; Makeup by Bridget O’Neill; Special thanks to The Friar’s Club.