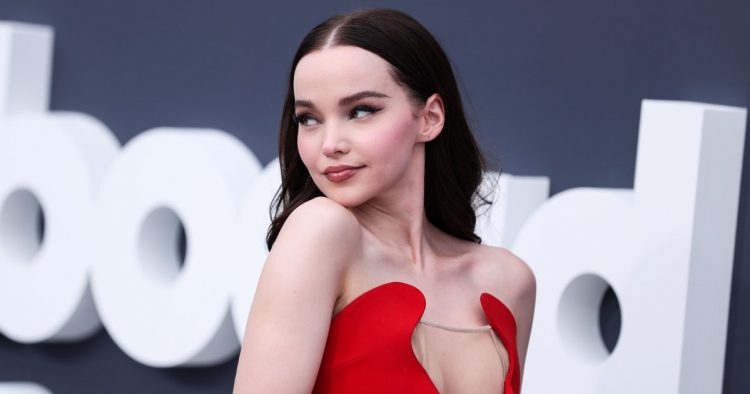 Dove Cameron has been in the public eye for several years now, rising to fame after playing the dual role in the hit Disney show Liv and Maddie in 2013. Her first relationship in the spotlight was with costar Ryan McCartan, whom she started dating while filming the series.

The two Disney stars made it official when the show launched and also established a band together called The Girl and The Dreamcatcher in 2016. That same year, McCartan proposed to Cameron. Unfortunately, their relationship ended around six months after their engagement.

When Cameron performed a cover of Ashe’s “Moral of the Story” in October and April of 2022, she left fans confused but interested if the song choice was about her past relationship with the actor. During the performance, Cameron reportedly changed the word “pain” from the original song to “engaged.”

Fans then became nostalgic and assumed the lyric change was about Dove’s engagement with McCartan, along with other traumatic and painful experiences she has endured in previous relationships.

Read on to find out more of the inside scoop on Cameron’s dating life throughout the years and if she’s single now.

Why Did Dove Cameron and Ryan McCartan Break Up?

In 2016, when McCartan and Cameron called it quits, he announced on Twitter that it was Dove’s decision to end the relationship.

“We still love each other very much. Please be sensitive, as this is painful” McCartan tweeted.

Cameron also spoke out about the split, writing on Twitter: “Thank you for your support & full hearts in this very intense & human time. There’s a lot love between Ryan & I. Life is beautiful & long.”

In an interview with Seventeen, Cameron explained how her relationship with McCartan was the first time she seriously bonded with another person, calling it her “first ever real relationship.” She also opened up about how she felt the need to make everything look “perfect all the time” and said McCartan “put that in her ear.”

In 2017, there were rumors Cameron was involved with actress Kiersey Clemons after they posted a romantic picture on Snapchat. They were also seen holding hands at an event and were spotted sharing a kiss. However, neither party confirmed or denied the dating rumors.

Why Did Dove Cameron and Thomas Doherty Break Up?

That same year, the Disney star met Thomas Doherty on the set of Descendants 2. The relationship was confirmed by Dove during an interview, but she also said the couple wanted to keep their relationship out of the public eye.

Throughout their relationship, Dove spoke highly about him and their love. While speaking to Entertainment Tonight in 2019, she said, “I think, if I’m going to marry anyone, it’s going to be him.”

Their relationship came to an end in 2020, nearly four years later. She confirmed the news on Twitter, writing: “Hi all. In October, @thomasadoherty and I decided to part ways. The decision was incredibly difficult, but we still have love for each other, and will remain friends. Thank you for allowing us our privacy in this time.”

Most recently, in April 2022,​​ the 26-year-old shared with Nylon that she was going on her first real first date. She didn’t reveal the identity of her partner, so this kept the fans curious. Rumors have been circulating about Dove’s relationship with musician Alexander 23, but she’s stayed silent on the topic. In the singer’s new music video, she is locking lips with Alexander, and shows some real chemistry. Fans are waiting for her to address these rumors and reveal the mystery of who she went on a date with.