LeBron and Savannah James at the Hustle Movie Premiere 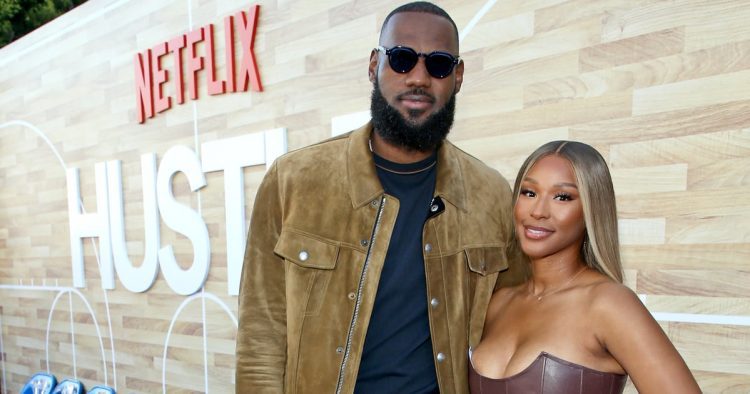 King and Queen James have entered the building. On June 1, LeBron and Savannah James attended the premiere of Netflix’s “Hustle” in Los Angeles, and they were the epitome of basketball royalty. The couple posed for photos on the red carpet, which featured a backdrop of a hardwood basketball court and a plethora of basketballs as decor. Savannah stunned in a brown Miaou corset top and houndstooth pants from NBA star Russell Westbrook’s Honor the Gift line. LeBron looked dapper as ever in a black T-shirt, black pants, and an olive-colored suede jacket.

LeBron and Savannah are no strangers to basketball-themed movie premieres. They walked the red carpet with their family for the “Space Jam: A New Legacy” event last July, which LeBron produced and starred in. Less than a year later, the James crew is back on the carpet for his latest venture. “Hustle” is produced by LeBron and Adam Sandler and releases on Netflix on June 8. The film stars Sandler, a bummed-out basketball scout who discovers in Spain what might be the game’s next big superstar.

LeBron’s Los Angeles Lakers might not be playing in the 2022 NBA Finals, which kick off on June 2, but there’s no such thing as an offseason when you’re King James. On June 2, Forbes announced that the superstar is officially a billionaire. As the first-ever active NBA player to hit this milestone, LeBron’s hustle both on and off the court is unmatched.