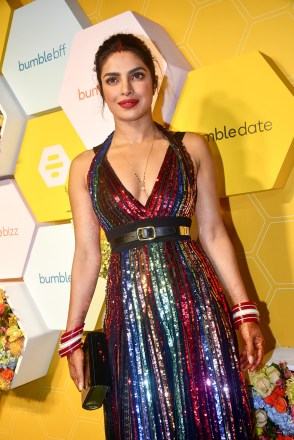 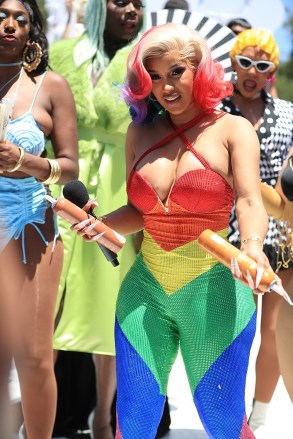 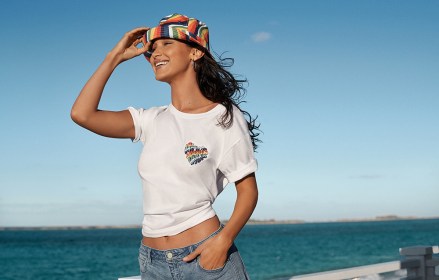 Cardi B celebrated LGBT rights in the best way on June 5. At the annual pride parade in West Hollywood, the “Bodak Yellow” rapper was seen confidently wearing a bright rainbow jumpsuit with a bustier halter top featuring all the colors of the pride flag: red, orange, yellow, green, blue, and purple! Walking with a mic in hand, she also got into the true pride spirt by having the tips of her hair dyed red, purple, and green. She also sported an ultra pointy manicure and dangly gold hoop earrings for a signature Cardi twist. 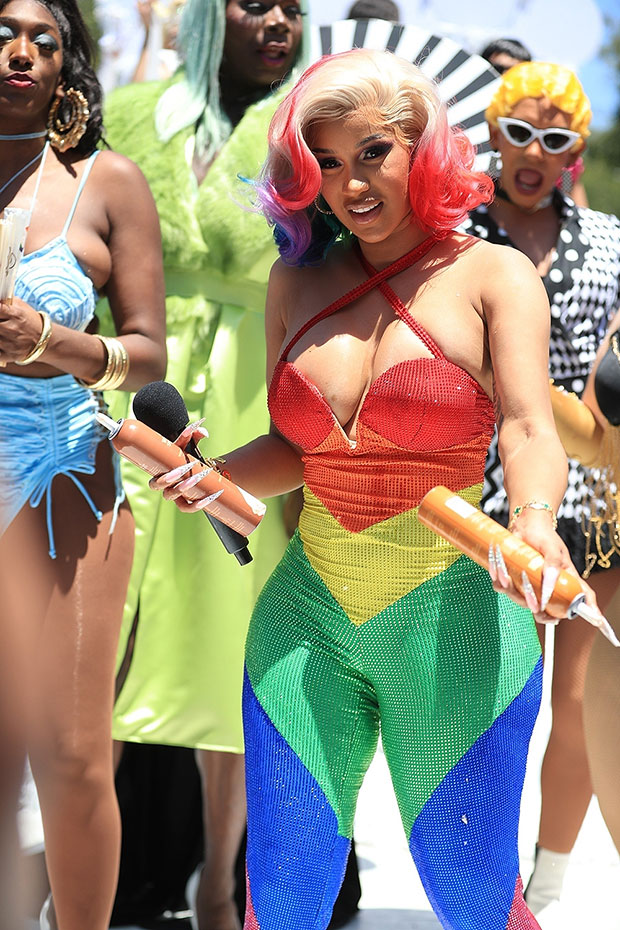 Cardi B In West Hollywood at a Pride Parade on June 5, 2022 (TheHollywoodFix.net / BACKGRID)

Cardi — née Belcalis Marlenis Almánzar — also brought the party to Pride with her own line of whip cream vodka dubbed Whipshots. The 29-year-old held two cans of the Cream Caramel flavor in either hand, presumably serving them up to anyone who wanted a sugary buzz (perhaps the person dressed up like her Invasion of Privacy album cover spotted behind to the back right). Notably, Cardi B launched her first-ever alcohol collaboration in Dec. 2021 with a splashy soirée during Miami’s Art Basel.

Later in the night, Cardi linked up with Lance Bass at Club Jeté before taking the stage to perform a few of her hits.

The “WAP” rapper has long been an ally of the LGBT community, speaking out publicly to express her support for equality and gay rights. “Every bad b**** have a gay best friend or gay best friend cousin ……If you homophobic you just ugly,” she tweeted on Jan. 4, shortly after she officiated Raven-Symoné‘s wedding to wife Miranda Maday. The nuptials were documented in an October episode of her Facebook Watch series Cardi Tries.

“You’re probably wondering why I’m here,” she explained to fans at the beginning of the episode. “I’m going to get these two beautiful ladies married. It’s not only a special day for you guys, but it’s a special day for me, and I want to thank you for making me a part of your beautiful journey,” she added, clearly emotional.

Pride 2022: Stars & Celebs Of The LGBTQ+ Community Pick The Perfect Songs For Your Pride Playlist