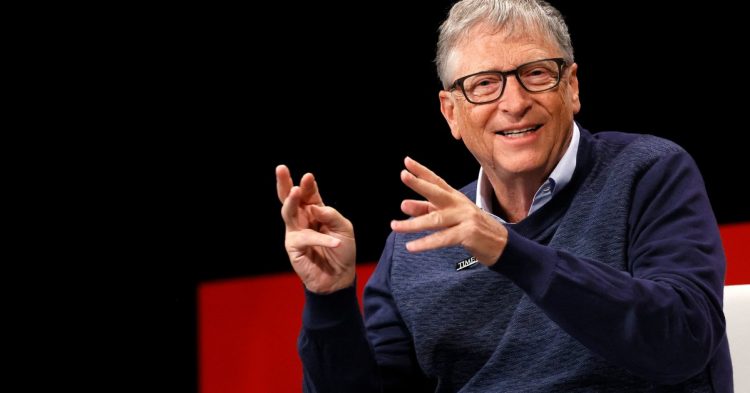 The cost of the COVID-19 pandemic is staggering, in terms of both human life and and economic activity. But Bill Gates believes humanity is fortunate that the virus was not even more devastating.

“I have to say, given the toll of this pandemic 20 million dead globally, a million in the U.S., and it could have been way more fatal. We just got lucky that the death rate per case was like 0.2%,” Gates told TIME senior correspondent Alice Park during the TIME 100 Summit in New York City on Tuesday.

While the official global death toll from COVID-19 is about 6.3 million, experts estimate that the real number of deaths is much higher. In May, the World Health Organization estimated that there were about 14.9 million excess deaths associated with the pandemic in 2020 and 2021.

Gates warned that we should not count on similar lucky during the next global pandemic. Considering how destabilizing the COVID-19 pandemic has been, if another virus emerges with similar virulence but a much higher fatality rate—say, 5%— it could be “society ending,” Gates said.

And Gates believes there may very well be a next time for many people alive today. “The chance of another pandemic in the next 20 years, either natural or intentional, I’d say, is over 50%,” he said.

Such a warning is especially disturbing coming from a person like Gates, who has spent more than two decades fighting humanity’s greatest threats through the Bill & Melinda Gates Foundation. In that time, Gates has built a reputation as one of the world’s greatest optimists when it comes to the ability of science to change the world. And his investments into have helped save countless lives, including by accelerating the distribution of vaccines for diseases like pneumococcus and rotavirus, funding the distribution of tools like bed nets to limit the spread of malaria, and investing in research, including for malaria vaccines.

Though Gates has not been shy to raise the alarm when the world is in danger—such as, in 2015, when he warned that the world wasn’t ready for a viral outbreak, he isn’t a doomsayer. In fact, he’s repeatedly argued that pandemics aren’t inevitable. Indeed, his latest book is titled How to Prevent the Next Pandemic. As Gates explained in his interview with TIME, the COVID-19 pandemic has created a unique opportunity to prevent another pandemic from ever happening again—but only if the world is willing to make key investments.

Specifically that means improving technology, including vaccines, therapeutics, and diagnostics; building up health systems; and improving global monitoring of diseases. In his interview with TIME, Gates emphasized that these changes are necessary in both wealthy and poor countries, to ensure that scientists everywhere have the resources they need to raise red flags about bourgeoning outbreaks, and to get them under control within just 100 days, a key window during the COVID-19 pandemic, Gates said, before the virus began to spread exponentially.

To improve global disease monitoring, Gates argues for the creation of what he calls a “Global Epidemic Response and Mobilization” team, which would be comprised of 3,000 infectious disease experts and would be managed by the World Health Organization. Among other activities, the group would help to lead disease-outbreak drills in countries to test their preparedness.

Funding such a team would cost roughly a billion dollars a year, said Gates. But, he noted, given the societal cost of COVID-19, that’s a bargain if it means heading off another pandemic.

The TIME 100 Summit is the live event extension of the annual TIME 100 list of the most influential people in the world. It convenes leaders from the global TIME 100 community to spotlight solutions and encourage action toward a better world. This year’s summit features a variety of impactful speakers across a diverse range of sectors, including politics, business, health and science, culture, and more.