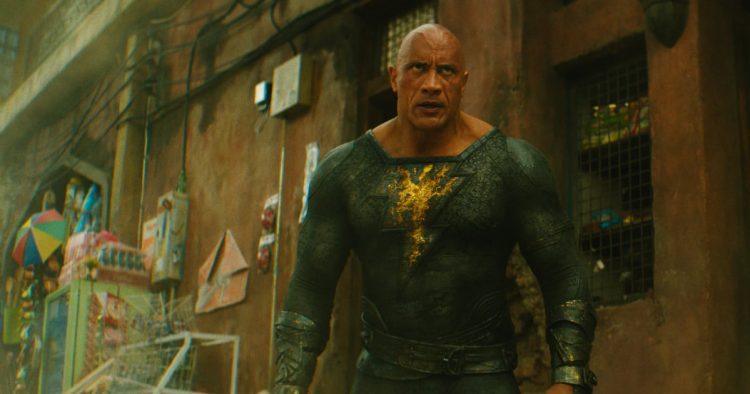 After years of anticipation and a decades-plus-long journey, Dwayne Johnson is ready for his “Black Adam” debut. On June 8, DC finally unveiled the first full trailer starring the actor as the dark antihero he’s been waiting to portray since expressing interest in the character in 2007. The newest DC comics star brings the pain in the two-minute action-packed clip that reveals him to be a new kind of hero.

“In this world, they’re heroes and they’re villains. Heroes don’t kill people,” Aldis Hodge’s Hawkman says in the trailer — but Black Adam sure does. Johnson’s character — born extraterrestrial Teth-Adam who was imprisoned on planet Kahndaq for 5,000 years, per the DC comics — reveals, “I was a slave until I died. Then I was reborn a god.” And in Black Adam’s world of power, he kneels to no one.

Black Adam, troubled with a long, complicated history in the DC comics, bears the burden of being an unconventional hero. While he has superhero powers, he doesn’t follow the traditional hero rules. “He has such a unique story, and he goes well with my style and view of the world in general,” director Jaume Collet-Serra told Entertainment Weekly. “In a world where not everything is black or white, you need a superhero like him to operate in the gray area, who has his own moral code.”

From the looks of the trailer, “Black Adam” will take an all-encompassing look at the antihero’s family history and unique backstory. The film also marks the first live-action introduction of the famous DC superhero team Justice Society of America — which features Hodge’s Hawkman, Pierce Brosnan as Doctor Fate, Noah Centineo as Atom Smasher, and Quintessa Swindell as Cyclone.

DC shared the first teaser for “Black Adam” at DC FanDome in August 2020, showing concept art of Black Adam being enslaved in his birthplace of Kahndaq, where he acquires his powers (he was originally chosen to be Shazam’s successor) and then gets imprisoned. Five-thousand years later, “the man in black” is free.

The film was originally scheduled to premiere on Dec. 22, 2021, then later pushed to July 29 of this year. Now, “Black Adam” is expected to hit theaters on Oct. 21. DC fans, get excited about the movie’s fall premiere and watch the trailer above.