What’s New to Stream on Netflix for June 2022 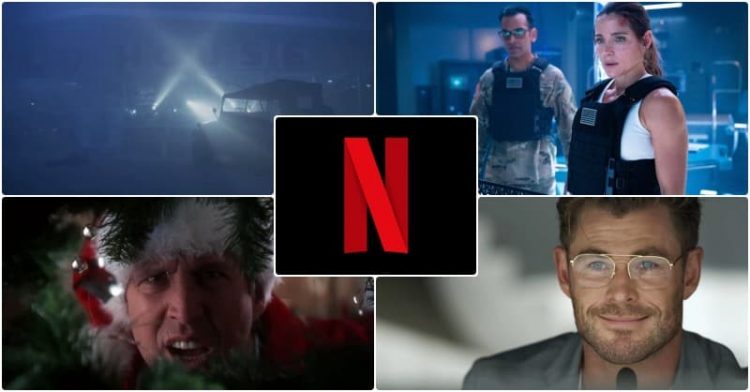 New movies from the directors of ‘Top Gun: Maverick’ and ‘Red Hill’ await you this month!

Crossing the Streams is a series of columns spotlighting all the offerings hitting the big streaming services each month. This time we’re checking out the new Netflix arrivals for June 2022. They include action throwback Interceptor, new films from the directors of Top Gun: Maverick and Red Hill, and more!

Netflix Pick of the Month for June 2022 We’re a multi-headed beast here at FSR with a multitude of movie tastes to prove it. Exhibit A? While our own Aurora Amidon is no fan of Interceptor, I’m making it my Netflix pick of the month. As with all movie opinions, there’s no right or wrong here, but director/co-writer Matthew Reilly’s feature debut delivers a solid little jolt of 90s-infused action fun. Elsa Pataky plays an Army captain assigned to a base at sea, and when terrorists come calling she’s all that stands between them and America’s nuclear annihilation. It’s no great shakes on the visual front (thanks Netflix!), but Pataky and friends deliver some terrific action beats with gun fights, one-on-one brawls, and a killer beheading. Will it leave your jaw on the floor like RRR or The Raid 2? Not even close. But it will scratch your itch for some simple, effective action antics that you can enjoy and immediately forget about, and sometimes that’s more than enough to hope for. I know nothing about the new Spanish action/thriller Centaur (premieres June 15th) beyond its IMDB synopsis, but honestly, this is all I need. “Rafa’s hooked on the pure, fiery feelings he gets from speed racing, but when his kid’s mom gets mixed up with drug dealers, he burns rubber to save her.” He burns rubber to save her. I am absolutely in for this tale of a man who loves racing more than his family, and when they’re in trouble he uses that as a reason for more racing. Yes, please.

You might not know it, but the director of the box office behemoth Top Gun: Maverick has a brand new movie hitting Netflix this month. It’s true! Spiderhead (premieres June 17th) comes from director Joseph Kosinski and the writers of Zombieland, and it stars Chris Hemsworth, Jurnee Smollett, and Miles Teller. Yeah, that last name doesn’t inspire a lot of confidence, but the premise seems interesting enough as near-future prisoners are experimented on to the point of falling in love? I may have read that wrong, but either way, it’ll get a watch from me.

Typically speaking, the higher the budget of a Netflix action film the more disappointing it ultimately is — although I’m hoping that’s untrue when it comes to next month’s $200 million The Gray Man — so what to expect from the $75m The Man from Toronto (premieres June 24th)? Director Patrick Hughes got our attention with Red Hill before falling into the uninspired franchise biz with The Expendables 3 and a pair of disappointing Hitman’s Bodyguard films, but we’ll give his latest a shot as it pairs Woody Harrelson and Kevin Hart as a hitman and a little man who get confused for each other in Toronto. Could be fun! Right? Right?! Two Stephen King adaptations — two of the very best yet — hit Netflix in June, and you can’t go wrong with either one of them. Frank Darabont’s The Mist (2007, arrives June 22nd) remains a creepy slice of emotional devastation about a group of people trapped in a grocery store by otherworldly monsters. Horror and science fiction take center stage, but the film reserves its fiercest commentary for some very human monsters. The entire cast is on point here, the creature effects are fantastic and fun, and the ending is even more horrifying than the one King himself chose for his original story.

It (2017, arrives June 19th) is technically a part one, and yes, part two sucks a lot of ass, but it still works as a fantastically crafted standalone horror film. It focuses on the kids from King’s epic novel in their fight against a prehistoric predator now taking the form of a creepy clown. Pennywise’s other forms add to the scares, as do some strong performances from the young cast. Follow it up with the sequel if you must, but it’s not necessary. Our nightmares as kids have to be faced as kids or they’ll follow us into adulthood, and that’s as good of a place to end as any.

The Oldest New Arrival to Netflix for June 2022 Like most people, we’re in a love/hate relationship with Netflix as they offer some good new stuff while neglecting so much greatness from decades past. Their library of pre-2000 films is pretty slim, so each month we highlight the oldest new arrival — and June sees a three-way tie from 1989! First up is Lean on Me starring Morgan Freeman in a biopic about an inner-city school principal whose tough behaviors are always in the teens’ best interests. John G. Avildsen (Rocky) directs this rousing, real-life underdog tale, and it remains an inspiring watch.

Also new this month is the timely arrival of National Lampoon’s Christmas Vacation! Christmas in June? Sure, why not! I continue to be in the minority on this one — I love the original, but this holiday-themed entry is barely better than European Vacation which is notably better than Vegas Vacation. The rest of you love it, though, and now it can be a fun summertime watch! The 1989 three-way is wrapped up with the sweet, fun, and tear-heavy Steel Magnolias. Herbert Ross and a stellar female cast (Julia Roberts, Sally Field, Dolly Parton, Shirley MacLaine, Daryl Hannah, Olympia Dukakis) deliver a warm embrace of love and friendship in the face of loss, and it’s still pretty darn great.

Anchorman: The Legend of Ron Burgundy (2004)

His Dark Materials: The Golden Compass (2007)

6/3As the Crow FliesNetflix Series

Stand Out: An LGBTQ+ CelebrationNetflix Comedy

6/10Chickenhare and the Hamster of DarknessNetflix Film

Who We Are: A Chronicle of Racism in America

Web of Make Believe: Death, Lies and the InternetNetflix Documentary

The Wrath of GodNetflix Film

The Hidden Lives of PetsNetflix Documentary

The Man from TorontoNetflix Film

6/26Best of the FestNetflix Comedy