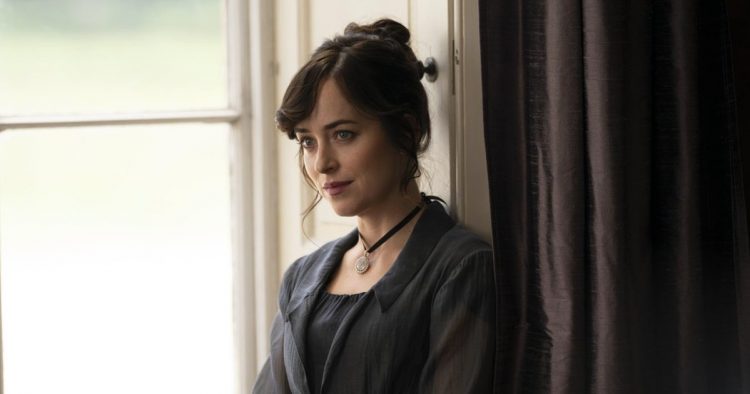 Dakota Johnson typically goes for films that take place in the present. But with Carrie Cracknell’s upcoming adaptation of Jane Austen’s 1817 romance novel Persuasion, the 32-year-old actor is changing things up. The trailer that dropped on Tuesday finds Johnson as Anne, a young single woman who’s edging past the age that early 1800s English high society expects her to marry. She was nearly ahead of schedule, but eight years prior, her parents decided the love of her life—the dashing Frederick Wentworth, played by Cosmo Jarvis—wasn’t up to snuff. “There were no two souls more in rhythm than Wentworth and I,” Anne laments. “And I was persuaded by my family to give him up.” (She may hate him, but for the audience, her father is a trip; Richard E. Grant’s character is the type to cover the walls with portraits of himself and his self-declared “exquisite” jawline.)

But Anne and Wentworth’s story isn’t over just yet. They reunite—right in the middle of Anne doing an impression of him complete with a smear of jam as a mustache, and describing him as “devastatingly handsome.” “Now, we’re worse than exes,” she says after they’ve gotten reacquainted. “We’re friends.” Meanwhile, another suitor presents himself in the form of Henry Golding. His character—a flirty gent named Mr. Elliot—is determined to marry Anne, and he isn’t afraid to remind her that he’s rich in his efforts to do so.

Persuasion doesn’t look like it’s going to be as unconventional as Joel Kim Booster’s new reimagining of Austen’s Pride and Prejudice as a gay love story. But with Johnson looking directly at the camera after her many quips, it’s clear that it isn’t your typical Austen adaptation—and we very much mean that in a good way. Ahead of its July 15 release, see for yourself in the trailer below.