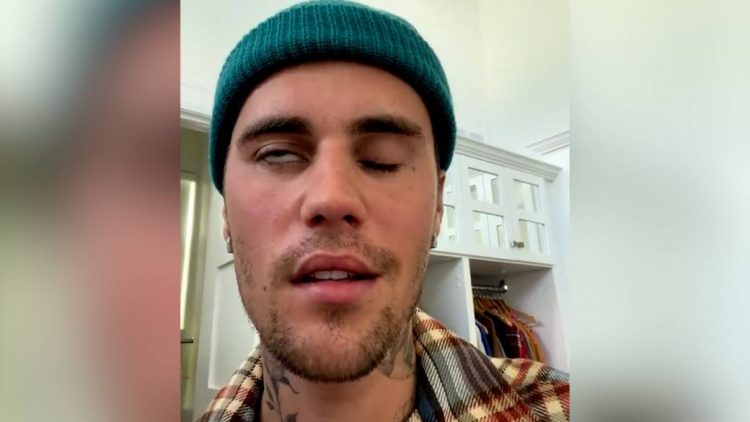 Justin Bieber has announced that he’s postponing the remainder of his North American tour as he deals with his recent Ramsay Hunt syndrome diagnosis.

All upcoming U.S. dates for his Justice World Tour have been sidelined for now, his tour promoter has confirmed, and the dates have yet to be rescheduled.

Bieber, 28, was forced to cancel a few of his upcoming shows last week, sharing on Instagram that he’s been suffering from the syndrome, which causes facial paralysis.

In a video uploaded to the social media platform on June 10, Bieber showed the extent of the paralysis on one side of his face.

2:22
Justin Bieber reveals he has facial paralysis as a result of Ramsay Hunt syndrome

Justin Bieber reveals he has facial paralysis as a result of Ramsay Hunt syndrome – Jun 10, 2022

“As you can see this eye is not blinking, I can’t smile on this side of my face, this nostril will not move,” he said in the video.

“This is pretty serious, as you can see,” he added. “I wish this wasn’t the case but obviously my body is telling me I’ve got to slow down.”

Social media accounts for Summerfest, a Milwaukee music festival where Bieber was supposed to appear next week, issued a statement from tour promoter AEG Presents, saying: “Justin continues to receive the best medical care possible, is upbeat about his recovery, and is looking forward to getting back out on the road and performing for his fans overseas later this summer.”

“He’s getting better every single day,” Hailey said. “He’s feeling a lot better and, obviously, it was just a very scary and random situation to happen but he’s going to be totally OK.”

Bieber is scheduled to begin the European leg of his tour in Italy on July 31 with dates that run through mid-August. He has shows booked in South America in September, the Middle East in October and Asia in November. So far, that leg of the tour will go ahead as scheduled.

Other tour dates are scheduled for countries around the world through March 2023 with some breaks.

Ramsay Hunt syndrome occurs from the reactivation of a viral infection, according to Dr. Charles Nduka, a consultant plastic, reconstructive and cosmetic surgeon in Brighton, England.

“Many people will have heard of chicken pox and chicken pox can cause a reactivation of the virus in the form of shingles, which is a rash that will form upon the body,” he said in an interview with Reuters. “If that rash occurs near the facial nerve, it can cause a sudden onset of facial paralysis, often linked with some pain around or behind the ear.”

People who develop Ramsay Hunt syndrome usually have another issue going on at the same time that causes their immune system to be suppressed, according to Nduka, who is also the co-founder of health charity Facial Palsy UK.

Patients with the syndrome will often notice their eyes become dry and the inability to keep fluid in their mouth.

“The symptoms that Mr. Bieber has described are classic for facial paralysis,” said Nduka. “Just the simple thing of brushing your teeth and trying to spit out the toothpaste can be very difficult if one side of the face is paralyzed.”

Ramsay Hunt syndrome has an annual incidence of 3.2 to 4.2 cases per 1,000, according to the Canadian Medical Association Journal (CMAJ).

About 75 per cent of patients with the syndrome who receive early treatment are expected to make a full recovery, he added.

— with files from Reuters and The Canadian Press