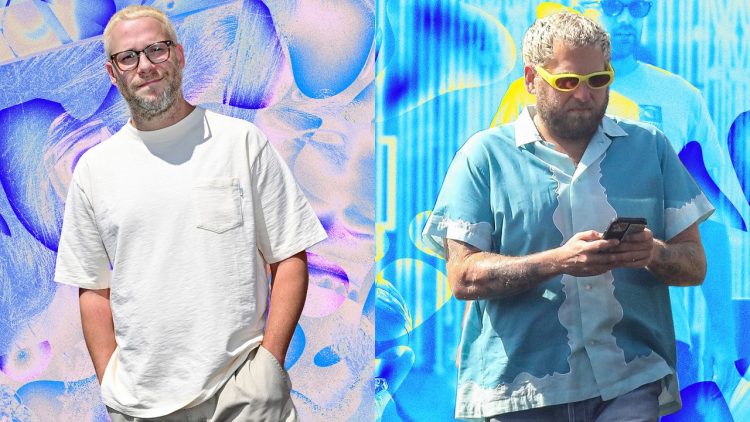 At some point in every man’s life, there is a high probability that he will bleach his hair. This feels especially true for celebrities. Everyone from David Beckham to Justin Bieber to Kid Cudi to Zac Efron has seemingly gone platinum blonde at least once. (And that’s only scratching the surface!) Now, we can officially add two stars from Superbad—Jonah Hill and Seth Rogen—to the “cool dudes with bleached hair” list.

Hill has been riding the platinum wave for some time now. Just last year, he and his slicked-back bleached hair graced the cover of GQ Style. His blissfully blonde hair has gone from surfy and flowy to short and cropped, and it looks great no matter the length. (And let’s not forget a couple of summers ago when he swung for the fences and went neon pink.) However, Hill’s current grown-out buzz cut feels pitch-perfect for this exact time of year.

Rogen’s turn to bleached-blonde is a newer affair. He showed up for an event in Los Angeles this week sporting the new hair. The oversized T-shirt and buzzed blonde cut could veer dangerously close into Slim Shady territory, but luckily Rogen’s glasses and pants keep it from going there. Plus, the Canadian went wholeheartedly Californian with the look, sporting wares from two LA-based labels: a boxy pocket tee from General Admission and slippers from Fear of God.

Two dudes living in Southern California going blonde for the summer months isn’t groundbreaking. But two movie stars from the Judd Apatow camp going blonde at the same time? We may never get a Superbad sequel, so we’ll take what we can get. As both Hill and Rogen have gone from funny everymen into Hollywood heavy hitters, the two have also grown into stylish, artful dudes. Simply put, the guys always manage to look and dress exactly the way they want to be. Sometimes that means wearing slouchy designer suits, and sometimes that means going bleached blonde—and that’s not a bad move when it comes to supercharging your summertime look.