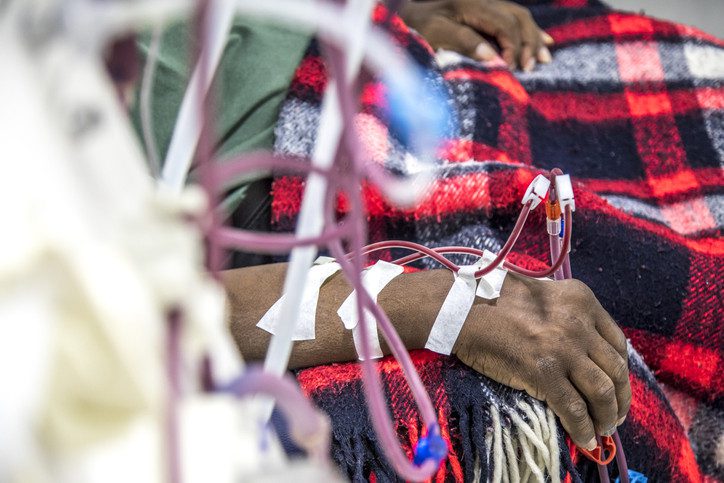 Chronic kidney disease (CKD) affects an estimated 37 million people in the United States. Often, it begins and progresses silently, causing no obvious symptoms until kidney function is severely impaired. During early stages, up to nine in 10 people aren’t aware that they have it.

If kidney disease is caught early and treated properly, serious problems may be avoided. Once kidneys fail, ongoing dialysis or kidney transplant is necessary. But barriers to care are highest for Black and Hispanic people with advanced kidney disease, and also for younger adults ages 22 to 44, according to a recent study.

How does kidney disease affect the body?

As a doctor who focuses on patients with kidney disease, I’ve found that it helps to explain a few basics. Our kidneys have several jobs. Their most important task is to regularly remove toxins from the bloodstream and excess water from the body by making urine.

If you have CKD, your kidneys are not removing toxins from your blood as well as they should. At its most severe, this can progress to end-stage kidney disease (ESKD), which is when the filtering capacity of your kidneys is reduced enough to make you feel ill.

If this occurs, two main forms of treatment can replace your kidney function: dialysis or a kidney transplant. Dialysis can be performed at a treatment center, or at home after appropriate training. Transplant surgery and post-surgical care occur at specialized centers.

Severe cases of COVID-19 requiring hospitalization have emerged as a separate risk factor for CKD. And genetic factors may predispose a person to kidney disease as well.

Gaps in kidney care are contributing to health disparities

Statistics show that people who are non-Hispanic Black, Hispanic, and Native American bear a disproportionate burden of kidney disease. For example:

Most likely, disparities in CKD reflect a combination of the social determinants of health, genetics, and a higher burden of other diseases that contribute to kidney disease, such as high blood pressure and diabetes. Barriers to getting proper treatment — particularly early treatment — play a role, too.

A recent retrospective study in the American Journal of Kidney Medicine suggests age is also a factor. The researchers reviewed data from more than 800,000 patients who received dialysis at home, dialysis at a treatment center, or a kidney transplant between 2011 and 2018. They found

These disparities may be driven partly by the fact that Black and Hispanic patients are less likely to receive appropriate early-stage kidney care, and by differences in insurance. They may also be less likely to have access to a living kidney donor. An important limitation of this study is that these findings cannot be applied to other minority groups.

The good news is that most people can prevent kidney disease by following healthy lifestyle habits, such as eating a low sodium diet, getting moderate exercise, not smoking, and minimizing alcohol intake. If you have high blood pressure, diabetes, high cholesterol, or heart disease, you should be tested for kidney disease once a year. High blood pressure and diabetes — which occur more often among Black Americans and people of color in the US than among white Americans — harm kidneys. Studies such as the one described above increase our understanding of health disparities in kidney disease, with the hope of one day coming up with an equitable solution for everyone, no matter their background or age.