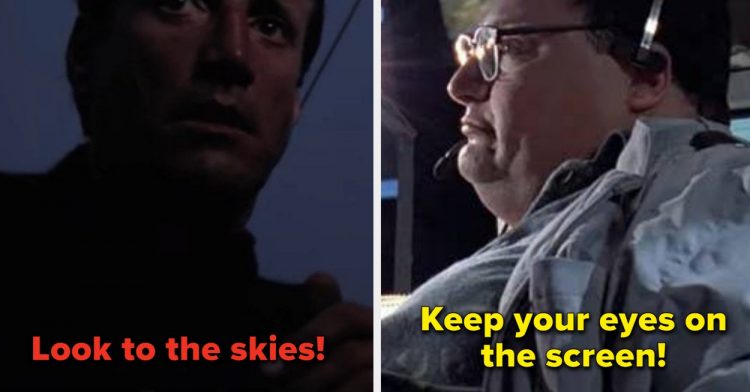 This Hollywood legend has had quite a history.

Steven Spielberg has had a long and prolific career as a filmmaker, so he has plenty of interesting tales beyond what he’s shown on the silver screen.

Many noteworthy things can be heard about how Spielberg created his films and the troubles he faced during production. In recognition of this director’s massive impact on the world of cinema, here are 18 hidden details and behind-the-scenes facts about Spielberg’s films.

One of the most iconic songs to come out of cinema is John Williams’ haunting score to Jaws, but apparently, Spielberg was not a fan of it at first. When Williams shared his idea with him and kept playing those two notes, the director thought he was joking. To be fair, the score doesn’t sound like much when it was just played on the piano. But eventually, Spielberg warmed up to it, and the song was forever burned into the minds of audiences everywhere.

These are not the droids you are looking for.

Given that George Lucas created Star Wars, it’s understandable that he’d put a little Easter egg into another one of his iconic franchises. In Raiders of the Lost Ark, when Indy and Sallah are removing the lid of the Ark’s sarcophagus, we can see some hieroglyphics of C-3PO and R2-D2 in the background. Star Wars did happen a long time ago in a galaxy far, far away, so maybe these two droids once spent some time on Earth.

The biggest Easter egg in Ready Player One was when the heroes entered Stanley Kubrick’s The Shining. This scene was originally supposed to be a simulation of Blade Runner, just as it was in Ernest Cline’s novel. But since they couldn’t get the rights to do it, Spielberg decided to use The Shining and pay tribute to Kubrick, whom he had made friends with during the making of this classic horror film.

You may have forgotten that Ted Danson starred in Saving Private Ryan, but you won’t forget this fun fact about his character, Captain Fred Hamill. His name is a reference to actor Mark Hamill, who’s famous for playing Luke Skywalker in Star Wars. But this isn’t this film’s only nod to this groundbreaking franchise. At one point, Ed Burns’ Private Reiben says, “I don’t have a good feeling about this one,” which references Han Solo’s iconic catchphrase.

Ever since the backlash he received for spoofing Jaws and Duel in his film 1941, Spielberg has abstained from referencing his own filmography in his films. However, he still sneaks in some Easter eggs every now and then. One of them occurs in Jurassic Park, where we see Dennis Nedry watching Jaws on his computer instead of doing his work.

Captain Hook is known for his fear of the crocodile that ate his hand, but in Spielberg’s “sequel” film to Peter Pan, the evil pirate is finally killed by the croc’s taxidermied corpse after it collapses on him. In Hook, the titular villain wears a hat resembling a crocodile’s mouth, likely foreshadowing his ironic fate at the end of the film.

Rexy in the Rain

If you thought the shark from Jaws was hard to work with, let me introduce you to Spielberg’s good pal, Rexy. While filming the iconic padlock scene in Jurassic Park, the animatronic T-Rex malfunctioned after its foam rubber exterior absorbed so much water, requiring the crew to dry the beast in between takes. The damage to the dino’s hydraulics was so bad that it began to move on its own. Imagine sitting around on that set and seeing a fake T-Rex come to life.

In two different shots during the nighttime boat attack in Jaws, you can see a shooting star fly through the night sky. Many people have speculated whether one of these stars, if not both of them, were real or not. But ever since then, Spielberg made shooting stars a trademark of his, as he has included them in films like Close Encounters and The Temple of Doom.

A failure to communicate

During one scene in Saving Private Ryan, a couple of enemy soldiers surrender to the Americans, who shoot them dead after failing to understand them. While they and the audience assume these men were Germans, what they said translates to, “Please don’t shoot me! I am not German! I am Czech! I didn’t kill anyone! I am Czech!” Historians will tell you that men taken prisoner by the Nazis were forced to enlist in the German army, with many of them being Czech and Polish.

In Jurassic Park, all the dinosaurs were made female to prevent them from breeding. However, it is revealed later in the film that their frog DNA allowed them to change sexes and breed with each other. The movie actually foreshadows this twist before the group even arrives at the park. When the helicopter carrying the scientists descends on Isla Nublar, Dr. Grant is forced to tie two female seatbelts together, similar to how the dinosaurs found a way to mate despite being female.

Close encounters of the ape kind

During the production of Close Encounters, Spielberg wanted to make the film’s aliens move like otherworldly creatures. What was his solution? To have an orangutan in a spandex suit and roller skates portray the alien. However, the crew had trouble controlling their primate actor while filming, so the idea was scrapped. While this would’ve made for a terrible ending, it would’ve definitely been a hilarious prequel for The Wolf of Wall Street.

The legacy of Night Skies

Spielberg once planned to make a horror sequel to Close Encounters titled Night Skies, but he had planned to make it more like a ghost story than a sci-fi film. The script had a group of alien scientists kidnapping and experimenting on farm animals, with one alien befriending a young human boy. This film was eventually abandoned, but many elements of it were later used in E.T. the Extra-Terrestrial and Poltergeist, so in a way, we got two sequels.

Schindler’s List is one of Spielberg’s most successful films, both critically and commercially. Nevertheless, the director refused any salary for his work, as he didn’t want any “blood money” made off of the horrors of the Holocaust. The film did make over $320 million in theaters, but Spielberg took his box office earnings and donated them to multiple Jewish organizations. About a year after the film’s release, Spielberg founded the USC Shoah Foundation to gather research and educate people about the Holocaust.

The origins of Amblin’

You may recognize Spielberg’s production company by the logo featuring Elliott and E.T. flying in front of the moon. But you may not know that the company’s name was taken from another of Spielberg’s earliest works: Amblin’. Released in 1968, this short film follows a couple of hitchhikers who fall in love as they travel across the Mojave Desert. After winning several festival awards, Amblin’ scored Spielberg his long-term deal with Universal Television, and the rest was history.

The gun is mightier than the sword.

Lots of people remember the scene from Raiders of the Lost Ark in which Indy shoots a swordsman ready to attack him. This was supposed to be a long and intricate fight scene, but Harrison Ford was suffering from dysentery during production and couldn’t perform it. Instead, Ford suggested to Spielberg that they should just have Indy shoot the guy and walk off. You can’t blame him for taking the easy way out, as he didn’t want to end up becoming “Han Soiled.”

That Jaws line was improvised.

The most unforgettable line in this landmark film was Brody’s frightened response to seeing the great white, “You’re gonna need a bigger boat.” This quote was birthed after the film’s crew members repeatedly complained to producers that their support boat was too small. Since then, the line became a repeated joke for whenever anything went wrong on the set, and actor Roy Scheider eventually squeezed it into the film.

E.T. almost got a sequel.

Given the outstanding success of E.T. the Extra-Terrestrial, it was only natural that there were plans for a sequel, which was strangely titled Nocturnal Fears. Featuring a much darker story, this follow-up was supposed to show Elliott and his friends and siblings getting kidnapped by evil aliens from the same world as E.T. This would’ve forced E.T., revealed to be named Zrek, to return to save Elliott and the other kids. Spielberg understandably scrapped this sequel, believing it would “rob the original [film] of its virginity.”

Death in The Twilight Zone

One of the most infamous productions in Hollywood history was that of Twilight Zone — The Movie, which was helmed by multiple directors, including Spielberg. In director John Landis’ segment of the film, an accident involving a helicopter stunt resulted in the deaths of Vic Morrow and two other child actors. During the investigation of the accident, it was revealed that Landis illegally hired the child actors to get around California’s child labor laws. Though Landis was acquitted of manslaughter charges, Spielberg ended their friendship and demanded an end to the New Hollywood Era of directors having almost complete control of their films, saying, “No movie is worth dying for.”

Do you agree with this list? Are any other hidden details or BTS facts that I missed? Please let me know in the comments section below.