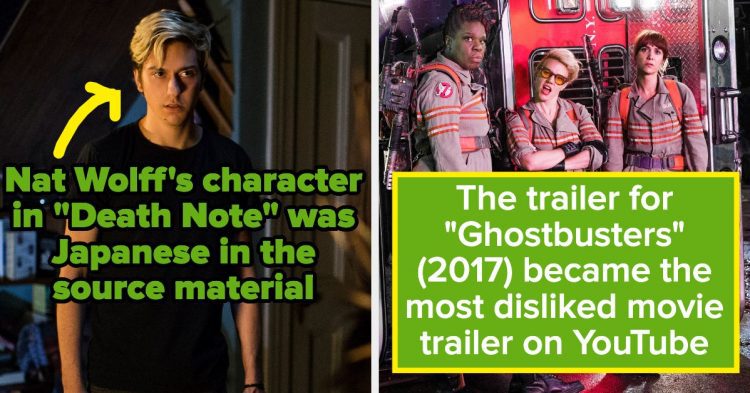 Songbird was the last thing 2020 needed.

The trailer for the upcoming film, Persuasion (2022), was recently met with a lot of backlash on social media for its comedic tone and unfaithfulness to the source material.

The film, which is based on the Jane Austen novel of the same name, stars Dakota Johnson as Anne, who “must choose between putting the past behind her or listening to her heart when it comes to second chances.”

The main criticism of the trailer seemed to be its modernness. “Looks like they’ve removed the most interesting part of Jane Austin stories: the social settings of the time, and the women forced to navigate in them. This appears to be a modern teen drama with 18th century garb. No thanks,” one Twitter user wrote.

Songbird (2020), a dystopian thriller based on the COVID-19 pandemic, was pretty much met with universal criticism as soon as the project was announced.

The film, which stars KJ Apa and Sofia Carson, takes place in 2024, in a world where COVID-19 has mutated into an even deadlier COVID-23, resulting in forced quarantine camps. “Reading the room should be offered as a high school elective,” one Twitter user wrote in response to the trailer.

Writer and director Adam Mason addressed the controversy in an interview with BuzzFeed News: “I completely understand if you want to be like, ‘f*ck that movie,’ but the fundamental message with the movie is hopeful for me. That was what I was really trying to get across. I was not in any way trying to make a negative movie that capitalizes on what is by anyone’s standards a terrible, terrible time.”

The trailer for Dear Evan Hansen (2021) sparked immediate backlash for the casting of Ben Platt, then 27 years old, as a high school student.

Although Platt played the character in the original Broadway show, which won numerous Tony Awards, many felt he had outgrown the role. Others criticized the film’s use of de-aging makeup, which some believed had the opposite effect on Platt.

Platt defended the casting in an interview with Zach Sang: “People like to have something to say that is negative, regardless of what it is. And so if my thing is something that I can’t control at all — which is my age — then bring it on. I’m glad it’s not about the performance or my voice or anything that actually matters.”

Taylor Swift faced backlash when she announced her involvement in the upcoming film adaptation of the novel Where the Crawdads Sing. The book’s author, Delia Owens, who spent decades as a wildlife conservationist in Africa, was the subject of a 1996 news program entitled “Deadly Game: The Mark and Delia Owens Story” that depicted the killing of a suspected poacher.

Delia herself was not a suspect in the case, and no charges were ever filed. However, a 2010 New Yorker story about her and her former husband’s conservation work revisited the killing, fueling a conversation about whether their work had “go[ne] too far.” The novel, published in 2018, reignited those conversations after some readers noted alarming parallels to the real-life incident, in addition to problematic portrayals of Black characters.

Needless to say, the upcoming film is connected to a controversial past. Where the Crawdads Sing is set to be released on July 15, 2022.

Ghostbusters (2016), which features a predominantly all-woman cast, received instant backlash online when the trailer debuted. At the time, it was the most disliked movie trailer in YouTube history.

The film has an approval rating of 73% on Rotten Tomatoes.

Cats (2019) was pretty much doomed as soon as the official trailer dropped. Immediately, social media was flooded with mocking memes and negative reactions.

The response actually prompted filmmakers to alter the CGI. Director Tom Hooper explained in an interview with Empire: “We’d only finished shooting in March, so all the visual effects [in the trailer] were at quite an early stage. Possibly there were, in the extremity in some of the responses, some clues in how to keep evolving [the production]. When you watch the finished film, you’ll see that some of the designs of the cats have moved on since then, and certainly, our understanding of how to use the technology to make them work has gone up, too.”

Upon release, Cats was a box office bomb and critically panned. It has an approval rating of 19% on Rotten Tomatoes.

On a similar note, Sonic the Hedgehog (2020) was actually delayed because people were SO freaked out by Sonic’s design in the initial trailer.

Director Jeff Fowler thanked fans on Twitter for their criticism: “The message is loud and clear… you aren’t happy with the design & you want changes. It’s going to happen.”

Thank you for the support. And the criticism. The message is loud and clear… you aren’t happy with the design &amp; you want changes. It’s going to happen. Everyone at Paramount &amp; Sega are fully committed to making this character the BEST he can be… #sonicmovie #gottafixfast 🔧✌️

Ghost in the Shell (2017) — which was adapted from the Japanese manga of the same name — was criticized for casting Scarlett Johansson, a white woman, as a character who was Asian in the source material.

According to ScreenCrush, Paramount and DreamWorks also attempted to make Johansson “look East Asian” by altering the CGI in post-production. The experiment was reportedly scrapped, but still garnered criticism.

Johansson later addressed the backlash in an interview with Marie Clare: “I certainly would never presume to play another race of a person. Diversity is important in Hollywood, and I would never want to feel like I was playing a character that was offensive. Also, having a franchise with a female protagonist driving it is such a rare opportunity. Certainly, I feel the enormous pressure of that — the weight of such a big property on my shoulders.”

Ghost in the Shell has an approval rating of 43% on Rotten Tomatoes.

Adapted from the manga series of the same name, the film was criticized for casting Nat Wolff, a white actor, as the protagonist Light Turner. Like Ghost in the Shell, Wolff’s character was Japanese in the source material.

Producer Roy Lee defended the casting choice in an interview with BuzzFeed News: “I can understand the criticism… If our version of Death Note was set in Japan and [featured] characters that were Japanese-named or of Japanese ancestry. … It is an interpretation of that story in a different culture, so there are going to be some obvious changes. Some people will like them, some people may not.”

When the trailer for The Giver (2014) was released, some fans of the source material were upset that it was in color as opposed to black and white. For context, the characters in the book are unable to see color.

However, the film ended up featuring black and white footage after all. It starts off in black and white and then progresses to color as the protagonist, Jonas, gains the ability to see in color.

The Giver has an approval rating of 35% on Rotten Tomatoes.

Finally, The Emoji Movie (2017) was met with overwhelming negativity on social media as soon as the initial teaser trailer came out. The teaser received over 22,000 dislikes on YouTube within 24 hours of its release.

The film also generated controversy when Sony posted an Emoji Movie parody of The Handmaid’s Tale as a promotional image. The tweet has since been deleted.

The Emoji Movie has a 6% approval rating on Rotten Tomatoes.

This post has been updated to provide more context about Where the Crawdads Sing author Delia Owens’ conservation work in Africa and the subsequent media coverage of her time there.