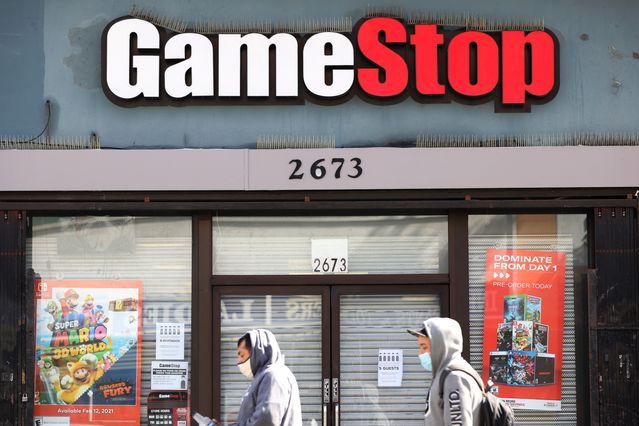 GameStop has been hit hard as more people download games rather than using physical discs.

saga is set to take another turn on Friday when shares begin trading following the company’s four-for-one stock split.

Anyone who was a

shareholder of record at the close of business on Monday is getting three additional shares. Investors who bought

shares between Tuesday and Thursday will get their additional shares from the seller.

Stocks splits change nothing fundamentally about an underlying company because they are akin to cutting the same pie into smaller slices.

That said, some investors pile in ahead of stock splits because stocks that do split tend to outperform the market. That is likely a case of the tail wagging the dog, since stocks with strong momentum are more likely to split than market laggards.

Even on a split-adjusted basis, the stock would be far above where most analysts expected GameStop would trade back in 2020—and even in 2021. The stock was trading at less than $3 early in the pandemic, but jumped in August 2020 when

co-founder Ryan Cohen unveiled a stake. He joined the board in January 2021, kicking off a flurry of buying among retail investors exchanging tips on the stock on Reddit. That price surge forced investors who had bet against the stock to close their positions in an epic squeeze that throttled some hedge funds.

A morning briefing on what you need to know in the day ahead, including exclusive commentary from Barron’s and MarketWatch writers.

Cohen became chairman in June 2021, as the company shook up its C-suite with executives with e-commerce experience. Under CEO Matt Furlong, the company has been investing heavily in turning itself around.

GameStop had struggled for years as consumers shifted from physical discs to online games and digital downloads. Now, it is betting big on expanded offerings like PC supplies and televisions. It also launched a marketplace for nonfungible tokens that it hopes will position GameStop better for the next era of gaming, though analysts are skeptical it can turn the firm’s fortunes around.

Management said this spring that it wanted to split the stock, and in June, shareholders approved an increase in the authorized share count to a billion from 300 million. GameStop announced the details of the split this month.

The company is still popular on some corners of Reddit. Some users believe another dramatic surge could be on the way. On the flip side, the stock still has more than its fair share of short sellers, who sell borrowed stock to bet on a larger decline.

About 13.5 million pre-split shares were recently sold short, or 21.6% of shares available for trading, according to data from short-selling analytics firm S3 Partners. The amount of shares shorted will change after the split, but the dollar amount, $2.15 billion, would remain unchanged, according to S3 Partners director Matthew Unterman.