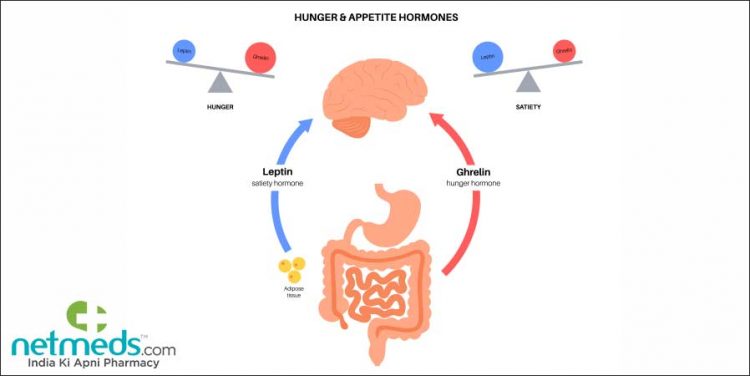 Ghrelin is a chief hormone in the human system that signals the body on when it is time to eat by stimulating appetite. Also known as the “hunger hormone”, ghrelin, besides increasing food intake and enhancing fat storage in the cells, tissues of the body, also activates the release of the human growth hormone/somatotropin from the pituitary gland.

Within the human body, maximum amounts of ghrelin are synthesized by specialized cells called enteroendocrine cells located in the stomach, besides small quantities being produced in the pancreas, small intestine and brain. The levels of ghrelin in blood circulation are high right before eating, triggering hunger pangs and uplifting the drive to consume food. Furthermore, ghrelin aids in food intake and assimilation of nutrients by elevating gastric motility and boosting the secretion of gastric acid in the stomach.

Once food is ingested, ghrelin levels decrease, since nutrients of carbohydrates, proteins, fats suppress the production and release of ghrelin. In addition, in the fasting phase when the hunger drive is the greatest, levels of ghrelin in people with high body weight are lesser than in people with low body weight. Hence, ghrelin also plays a pivotal role in mediating weight gain and supporting the long-term regulation of body weight. Ghrelin works in coordination with leptin, another hormone synthesized by the adipose cells that functions as the “satiety hormone”, indicating the body once it is full and that the tendency of hunger and heightened appetite have diminished.

Ghrelin And Its Structure:

The ghrelin hormone was discovered in the year 1999, by two renowned Japanese biochemists Masayasu Kojima and Kenji Kangawa. Through their in-depth scientific experiments and lab analysis, they determined that ghrelin was a ligand – compound that attaches to the receptor site – for the growth hormone secretagogue receptor i.e. GHS-R. Since ghrelin carried out the primary role as a growth hormone releasing peptide, it was named as “ghrelin”, derived from the root word “ghre” which in Proto-Indo-European languages means “to grow”.

Kojima and Kangawa also established that vast amounts of ghrelin was mainly secreted in the stomach and delineated its chemical structure as well. Ghrelin is a peptide hormone that belongs to the motilin family of proteins, composed of a 28-amino acid sequence, existing is two major forms – n-octanoyl-modified ghrelin and des-acyl ghrelin. The ghrelin hormone has a molecular weight of 3.374 kDa (kilo Daltons, with Dalton being a central unit of atomic mass).

Ghrelin is involved in several vital functions in the human body, including:

In general, low levels of ghrelin only arise after eating a meal and the sensation of hunger and raised appetite have been fulfilled. However, in patients with obesity who have undergone bariatric procedures like gastric bypass surgery, there is a decrease in the concentration of ghrelin since the surface area of the gut has been reduced.

Furthermore, individuals suffering from short bowel syndrome also display diminished levels of ghrelin in blood circulation due to decreased surface area of the small intestine and inability to absorb nutrients from ingested food. Those who have taken hormone therapy with somatostatin/growth hormone also have lower than normal levels of ghrelin, owing to counter-effects of increased amounts of somatostatin which impede the secretion and release of ghrelin from the stomach.

Ghrelin levels are usually high prior to eating food in the fasting stage and once meals are consumed, the levels of the hormone gradually subside. Yet, in certain situations, like in the genetic disorder Prader-Willi Syndrome, characterized by severe obesity, heightened hunger and poor learning capabilities, ghrelin levels circulating in blood are higher than normal.

Moreover, in the instance of the eating disorder anorexia nervosa, ghrelin levels in blood are elevated, to compensate for the undue weight loss by bolstering appetite, food consumption, fat storage and subsequent healthy weight gain.