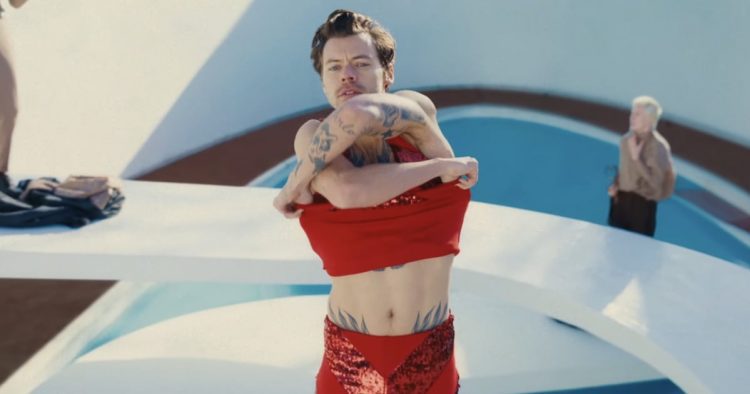 As POPSUGAR editors, we independently select and write about stuff we love and think you’ll like too. If you buy a product we have recommended, we may receive affiliate commission, which in turn supports our work.

Following the fringe vests and sailor pants that marked his “Fine Line” chapter, Harry Styles is entering a new sartorial era. The dashing singer is experimenting with new silhouettes and fabrics ahead of his third album, “Harry’s House.” Styles kicked things off on March 31 with the single, “As It Was,” which came with a uniquely choreographed music video. In it, Styles dons a red sequin outfit that feels decisive, as though Styles already anticipates the imitations and fan-made costumes to come.

Dressed by Harry Lambert, the music video’s style primarily consists of a red sequin, square-neck tank and matching trousers, custom made by Spanish designer Arturo Obegero. The video shows Styles in various states of undress, however: either stripped down in nothing but Merz b. Schwanen boxers, or layered up with a Bianca Saunders coat, Dries Van Noten scarf, and Ernest W. Baker driving gloves.

To come up with these costumes, Obegero turned to artists like Mick Jagger, David Bowie, Freddie Mercury, and Prince for inspiration. “Jagger’s effeminate tour outfits were the first thing we wanted to research,” the designer told British GQ. “His outfits throughout the Seventies were always super-fitted and had clean graphic lines that accentuated the body in a way we hadn’t really seen on men.”

The disco attire contrasts with the softer, more casual outfit Styles rocks on the “Harry’s House” album cover, which shows him in an upside-down living room wearing an embroidered blouse, wide-leg jeans, and ballet flats, all by Molly Goddard. Scroll on to catch a few angles of Styles in the music video, and recreate the looks with the pieces we found ahead.